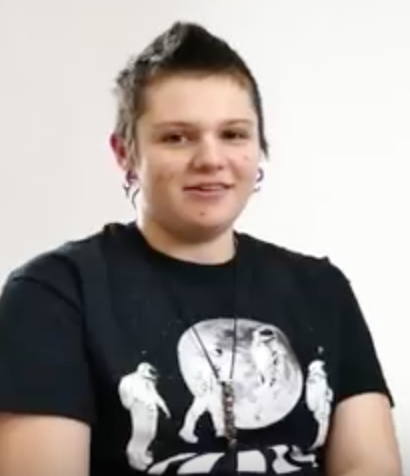 Done says being transgender will not definite him; rather, his personality and interests shape who he truly is.

Never embarrassed to be anything other than his complete and total self, Chris Doner (‘18) is always sure to adamantly portray his opinions with no regrets.

“I’m both bisexual and transgender, actually,” said Doner (‘18). “If I was a girl, I’d probably still be bisexual.”

For Doner, coming out was quite an intricate and diverse process. On one front his mom was relatively fine with him coming out.

“It took her a while to get used to it, but she’s very respectful,” he said.

On the contrary, Doner’s father is not as accepting, actually “close-minded” in comparison to Doner’s mother.

“No one actually uses my pronouns or my name. Typically I’m addressed by my birth name and no one likes to bring the topic to light,” said Doner.

In terms of social media, when Doner came out he merely “changed [his] name,” and on some sites “[his] bio.”

As aforementioned Doner is an all-around passionate being; in terms of rights for the LGBTQ+ Community, Doner’s enthusiasm undoubtedly shines through.

Foremost, Doner feels that in order for the rights of the LGBTQ+ Community to be fully recognized, all members of society must become properly “educated.”

“Many people,  without any ill-intent, are uneducated,” said Doner.

One of the first steps to this education is understanding the importance difference between sexuality and gender identity.

“Being trans has nothing to do with being bisexual or vice versa,” said Doner. “My gender isn’t my sexuality.  It’s like apples and oranges.”

Doner further pointed out that those who remain uneducated only leads to blatant inaccuracies that are actually rather embarrassing. For instance, some may have accidentally misused the word “transgender,” instead saying “transgendered.” According to Doner, using the latter word is quite idiotic.

“Transgendered is just simply grammatically incorrect. It’s like saying the shirt was ‘greened’ instead of saying it’s a green shirt,” he said.

As a final proposal to ensure that all East students truly become educated on LGBTQ+ issues, Doner hopes to adapt East’s curriculum towards a progressivist outlook.

“I think I can speak for many of my transgender peers when I say that I would love gender and sexuality to be taught to us in sex education,” said Doner.

Doner, in his becoming strong-willed demeanor, feels no pressure to act more ‘masculine’ simply because he is transitioning.

“I really look very feminine. Which is fine;  men can be feminine. I think that hasn’t sunk in yet for the people of this generation living in the past. Hopefully, with the new bathroom, people will be inspired to be more progressive towards the trans community,” said Doner.

After many year of agnosticism, Doner has converted to Judaism.

“I do know that God would see us all as equal children and probably wouldn’t want to divide us because of what’s between our legs,” said Doner.

Here is how you can support the LGBTQ+ community.

In the future Doner hopes to continue his transition, with plans of getting both “top surgery” and “hormone therapy.”

Doner is not as concerned with bottom surgery.

“That’s only because people never look at ‘what’s down below’ and immediately assume your gender,” said Doner.

Chris Doner (‘18) feels that being transgender does not define him. While he is proud to be transgender, he views his gender as just another facet of himself. Admittedly the most important aspect of Chris’s life… his avid love for drawing and reading, of course!