School board candidate Zachary Price meets with community members at his Brewtorium campaign event. "I'm not running away from the fact that I'm young," Price said. His opponent, Kristin Ashy, 44, has the endorsement of current District 4 Trustee Julie Cowan.

20-year-old runs for school board

Arriving at his interview with The Shield, Zachary Price burst into Thunderbird Cafe, out of breath, in a crisply-ironed purple shirt and black blazer. The 20-year-old had just come from a lecture, and to all observers he seemed like a normal college student, with his young features and bright enthusiasm, albeit an unusually well-dressed one. Price, however, is not spending his free time engaging in Greek life, playing Frisbee in the quad or tailgating before football games: he is running for the school board seat in District 4, which includes McCallum and Anderson.

“I’m not running as like, some sort of suicidal candidacy,” Price said. “I’m running because there are things I believe in that our current school board isn’t doing right, and I think it is going to take something different to make that happen. I’ve had a lot of really good conversations with parents and students and community members to make sure that they were seeing the same things I was and to hear what they were saying.”

Price is a junior at the University of Texas at Austin where he is majoring in government. In his free time, he plays trombone and soccer and presides as president over Texas Votes, an organization that registers and encourages students to vote.

“For as long as I can remember, I’ve wanted to do something to give back to my community,” he said. “I’m a government major at UT in the first place because I want the chance to make our public schools better. No matter what happens on Nov. 6, I’m gonna keep working to make our schools better and make Austin a better place to live.”

His platform, as listed on his website, prioritizes mental health, preventing sexual assault and educational equity. His suggestions include setting up an online and anonymous reporting system for sexual assault and harassment and an advisory body made up entirely of students.

“I go and talk about these issues that no other current member of our school board, no other candidate is talking about, and I get fantastic responses from students, parents and community members and teachers,” he said. “Because at the end of the day, our schools are about our students. And if we’re not doing everything we can to provide a good community for them, somewhere where they feel safe, somewhere where they feel like there are resources in place in case they need them, then we’re failing. So the response I’m getting, even speaking to neighborhood associations, to PTAs, when I’m talking about some of these student issues, is fantastic. Because the parents see the problems I’m talking about in their own kids, in their kids’ friends, and they’re glad that there’s someone talking about them.”

He says that another way he would attempt to change the Board of Trustees is to prioritize student opinion; having been inspired by the wave of youth political activism after the Parkland shooting, he says that the district should be engaging with the present generation’s politically energized students.

“The biggest thing I would say uniting a lot of the issues is that the school board does very, very little to engage students, period,” he said. “You have these kids who are, especially right now, dying to have their voices heard, because they’re afraid that schools aren’t going to be a safe space, that our schools aren’t doing enough to help kids succeed, and truly, the grownups are ignoring them.”

Price attended Anderson High School, where he played on the soccer team, in the marching band and on the Science Olympiad team. He was also a representative to the Austin Youth Council. His little brother Ben is currently attending Gullett Elementary.

“If elected, I would be the only member of the Austin ISD Board to have attended an Austin ISD school in the last 20 years,” he said. “That gap in classroom experience has a direct impact on the priorities our school board chooses. It’s important to have people with experience as students in our schools and whose priorities reflect that experience.”

Recounting his high school experience, he adds with a laugh, “I graduated from Anderson High; don’t hold that against me. Congrats on the Taco Shack Bowl win; y’all earned that.” 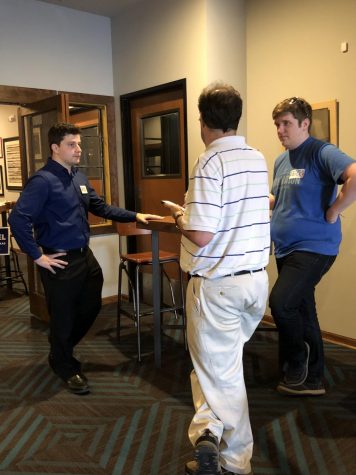 “I’m not running away from the fact that I’m young,” Price said. His opponent, Kristin Ashy, 44, has the endorsement of current District 4 Trustee Julie Cowan. Photos by Elisha Scott.

Running opposite him is Kristin Ashy, a 44-year-old AISD parent and former PTA president who attended Crockett High School and has served on various district committees and councils. Current District 4 Trustee Julie Cowan, who is not running for re-election, has endorsed Ashy.

“While not the norm, I am glad to see youth of America actively engaged and willing to step into public service,” Ashy said of Price’s campaign.

Price says that though he is young, he feels that experience is actually a strength for his candidacy. He has served as an AmeriCorps volunteer at Austin Partners in Education and as an intern at Communities in Schools. He is also the co-founder of The Language Campaign, an organization that pairs ESL students in AISD high schools with college-age mentors. He has interned with the offices of Austin Mayor Steve Adler and Texas senator Kirk Watson and served as assistant communications director in the office of Rep. Ryan Guillen.

“It certainly feels like I’m gaining momentum, and I’m really excited to see a lot of people in the community who wouldn’t necessarily need to stand behind a young candidate and say that this is the type of change we need in our local politics,” Price said. “There is no part of me that was sure that I would get the support I needed. I’ve been working my butt off to get it, and so it’s really good to see the work come in and produce the results, and at the end of the day it’s reflective of the community and what they want.”

McCallum parent Laura Yeager says that she first met Price six years ago when he was on the same soccer team as her son, and he was the only student who consistently showed up to board meetings. She met him again in 2016 at a Texas Votes event, and yet again that year while he was interning at the Texas Capitol. She said his maturity as a college freshmen impressed her. Recently, she says that she is even more impressed with his policy and hard-working attitude.

“Zach’s priorities are my priorities,” she said. “He wants to give students a voice. … Zach understands that the fate of every AISD student is tied together and that as one kid rises, we all rise. I really have faith in the youth of today to cut through the divisions the older generation has created—be they of race, gender, or party. Zach is willing to stand up for what is right, and he will do it with a smile and sincerity. … I am hopeful that with Zach on the board, it will inspire other young leaders to come forward and help lead our district, state and country into a place where we really have liberty, equality and justice for all.”

He says that no matter the outcome of the election, he will continue pursuing ways to influence education policy through public service. Despite the unusual nature of his candidacy, however, he is hopeful.

“I’m an optimist, and I think you kinda have to be to do something like run for office;,” Price said. “Some part of you has to be like, ‘Yeah, I have a shot.’”

Above all, he wants people to understand that he is not running as a 20-year-old student, but as a passionate candidate. If elected, he vows to take it as seriously as the position deserves.

“I may be young, but I am absolutely qualified to hold this position, and prepared to work day-in day-out to make our schools better,” Price said. “Young people are the most affected group by the policies the school board puts in place– why on Earth shouldn’t they get a voice in the process?”

This story was originally published on The Shield Online on October 17, 2018.