Upper School students sit in the commons during Wednesdays' assembly

With the 2018-2019 school year upon us, the Class of 2019 (like all classes before) is looking forward to the “senior privileges” that the previous Saint Stephen’s classes have had. Senior privileges are traditional “advantages” on campus that each senior class earns as a result of three years of hard work and enhanced maturity.

These privileges have covered several desirable areas of interest for seniors: select parking spaces, The Nest (a social gathering area near the lunch loggia), a private cookie line, signing out for off-campus lunch, to standing around the Upper School Commons during assemblies.  For years, these privileges have “come with the territory” of being a senior.

But at the opening assembly this past Wednesday in the Commons, seniors realized that some of the privileges that they’d been waiting for the past three years are not as they imagined.

While many of the privileges remain the same, there is one area that the Class of 2019 has been discussing: the privilege of standing around the Upper School Commons during assembly, while the rest of the grades sit in the middle of the Commons.

This new school year, for various reasons, the administration came to the conclusion that all of the students in each grade level should sit in the Commons during assemblies.

So why the change this year? Well, the change is due to the size of the freshman class, along with the desire to foster a closer community during our meeting times.

“The Commons were designed so that everyone could sit there together,” Mr. Forrester said. “Assembly is a time when we all come together and it’s much better for everyone to be all together especially when we start making announcements and celebrating each other, it makes everyone feel more connected”

“Last year there was a larger senior class, so it was tricky to get everyone in one space,” Mr. Forrester said. “But with the smaller freshman class this year, I believe that we are able to have everyone in the Commons.”

The new policy has been in effect for two assemblies now, and according to some in the student body, grade levels are not pleased with the amount of room that they have during their Wednesday mornings. Seniors in particular are reporting some discontent.

Max Damm, a senior, said: “I feel like the new rule change is hurting us more than helping us. It’s going to get really stuffy and cramped in there, and we won’t be able to pay attention because we’ll be trying to find our own personal space.”

The solution to the new rule is simple. When the bell rings on Wednesday, hustle to the Commons and try to get an area in which you can be both comfortable and able to focus at the same time.

Another senior privilege that has fallen to the wayside this year is the senior parking privilege. This year, the senior class will not have their own select parking in the lot located in front of the Upper School.  That lot is now first come first serve.

Sr. Wolcott, the school’s parking director, is always out managing cars.  You can see him ushering in and greeting students every morning. But what the students don’t see is the planning that Sr. Wolcott has to do to keep the students from Fledglings to seniors safe out in the busy parking lot.

Wolcott said, “The spots out front of the school are set aside for the students who need to leave early. In the past, all the drivers in those spots would leave at 3 o’clock, the same time that Fledglings and other students would get picked up. In order to protect those from all ages, we try and maintain and limit the number of cars leaving at 3 to a minimum.” 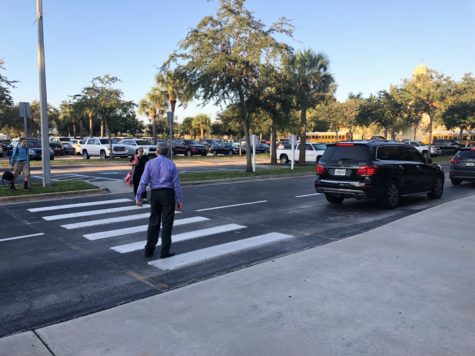 “Señor,” as the Upper School students call him, has put a lot of time and effort in to protect the students and make sure that traffic is flowing smoothly.

“The first come first serve rule seems like the most fair solution to all of these problems,” Sr. Wolcott said. “If you want those spots out front, arrive at school earlier.”

Although seniors are still able to park in the front lot, many do not believe that they should have their parking “privileges” taken away.

One of those seniors is Jarrett Millican. “I just don’t think it’s fair for the seniors,” Millican said. “The seniors have worked very hard to get to where they are today and they shouldn’t be worrying about not getting their preferred parking spot.”

In the end, senior year is a year to enjoy many privileges that you have, not to think about the ones that you don’t. Enjoy this last year while you can and make the most of it.

This story was originally published on The Gauntlet on September 11, 2018.