The Sota clothing store opened in Aug. 2018 and can be found at 6518 Walker St, St Louis Park or visited online at sotaclothing.com.

According to Sota store owner, Spencer Johnson, he was recently inspired to open their first physical location of the clothing brand flaunting Minnesota after being strictly online for seven years.

“Whenever we did events, (people) would ask us where our store front is located, and we’ve always said that we’ve just had one online,” Johnson said. “(Opening the store) was just kind of a way to connect with customers.”

Johnson said that after making the decision to open up their store, the initial matter of debate was actually choosing the location.

“(I wanted to) make sure we were close to Minneapolis, but also (wanted) somewhere they had free parking,” Johnson said. “St. Louis Park is a good location for people.”

Sophomore Hannah Howell said she discovered Sota when she noticed one of her friends wearing the brand.

“I’ve (also) seen their things all over social media so I decided to go and see if I could get some for myself,” Howell said.

According to Johnson, although the best selling items generally have been their hats and sweatshirts, their workout gear has also proved popular since opening. 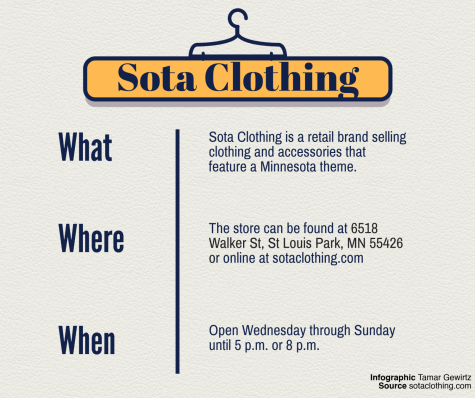 “We had athletic clothing that we only had online and now we have it in the store. We notice that sells a lot better in the store versus online because people can come in and try it out,” Johnson said.

Sophomore Koby Davis said the clothing did not personally suit him but he still admired the design of the products.

“I think they have some really cool designs, and they look great, but it’s just not my style,” Davis said.

Howell said she likes the products because they are casual but still flaunt the brand.

“I’m from Minnesota. I’m proud of that, and I want to wear stuff that says it on there,” Howell said.

Johnson said a major advantage of having a physical store, and his favorite part, is that they now have the ability to throw different events in the space.

“We’ve been able to do yoga and different workouts, and we did two different holiday pop ups here last week so now we just get to use our space in different ways that we weren’t able to before,” Johnson said.

According to Johnson, business since opening has been good, but because of the exact whereabouts of the store, finding it may present difficulties.

“This part of St. Louis Park isn’t as well known as the west end so we’re really doing a lot of marketing effort to really push to let people know where the store is located,” Johnson said.

The Sota clothing store opened in Aug. 2018 and can be found at 6518 Walker St, St Louis Park or visited online at sotaclothing.com.

This story was originally published on The Echo on December 21, 2018.