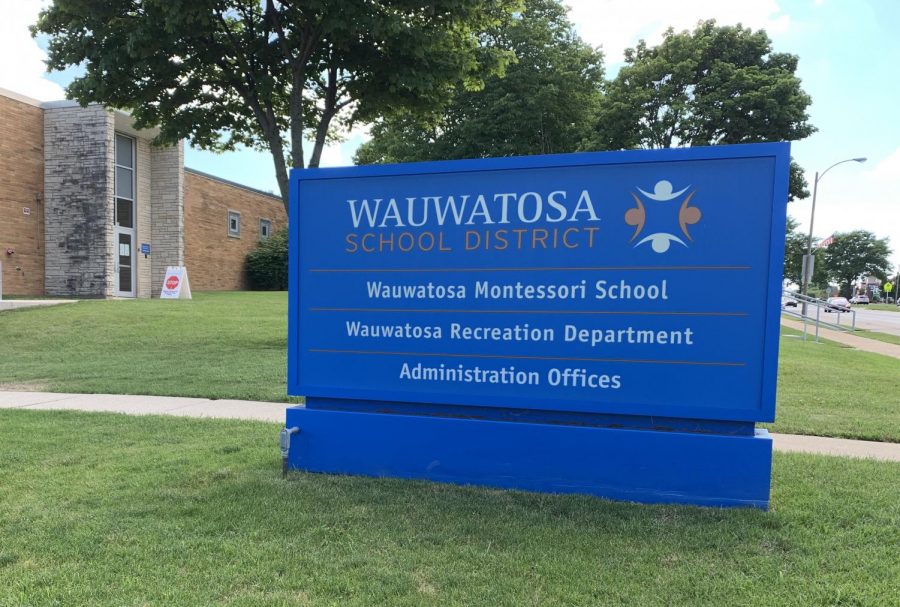 2020 Wauwatosa West Graduate Anyiah Chambers had her first and only minority teacher at West her senior year.

Chambers said she always struggled with math. She says she was willing to learn but faced challenges getting concepts down on tests. However, when she had Wauwatosa West Math Teacher Nathaniel Griff for the class College Math Foundations, something changed.

“When I met Mr. Griff, an African American minority teacher, everything instantly seemed to click for me and I received higher test scores in his class,” Chambers says.

With Griff, Chambers said, “I saw an individual like myself who told and showed me I had the potential to succeed. He also opened doors and opportunities for me to grow as not only a student but as a true human being.”

Chambers said Griff provided a sense of relatability and gave her the “hope and faith to succeed” as a student and person. “Mr. Griff was able to break things down and apply the work to my real life.”

Over her time at West, Chambers said she noticed more minority staff “enter our building which made things for me a little more comfortable but they weren’t teachers.”

Chambers says she would have liked to have more teachers of color. She feels that the Wauwatosa School District should try to hire more minority teachers district-wide especially as the population of minority students has grown in recent years.

Wauwatosa West alum Thomas Leonard finished his time at West in 2016 and had no teachers of color.

Leonard believes his experience is common for students who attended West.

“I think that’s pretty typical for students,” Leonard said. “There was a lot of us who shared the same sentiments just wanting to have that experience of having teachers that looked like you, how important that is.”

Leonard believes that having a minority teacher that looked like him would have provided representation.

“I think it’s incredibly important to see people that look like you doing the work that’s primarily affecting your life and your education,” Leonard said.

Leonard also believes that for students, “having a teacher that looks like you” provides a shared experience to relate to.

Wauwatosa School District Superintendent Phil Ertl says the teaching staff in the district is “more diverse than it has been but not nearly as diverse as our student population.”

Ertl says the district has been and is currently working to increase the number of teachers of color, “similar to a lot of districts in suburban Milwaukee.”

Many other districts locally and statewide have also experienced increasingly diverse student populations in the last decade while the percentages of teachers of color have also slightly increased.

According to a June 2020 report from the Wisconsin Policy Forum, “A Teacher Who Looks Like Me: Examining racial diversity in Wisconsin’s teacher workforce and the student-to-teacher pipeline,” despite the increases in the percentages of teachers of color in classrooms, the gap between the percentage of students and teachers of color widened statewide in the last decade.

Although the teacher-student race gap has not largely widened in the Wauwatosa School District in recent years, like other districts in the state and Milwaukee area, the district aims to hire and retain more teachers of color to reduce the gap. However, Wauwatosa and other school districts are encountering difficulties due to the relatively small pool of teachers of color.

Importance of Teachers of Color

Recruiting, hiring, and retaining teachers, administrators, and staff of color to maintain a diverse workforce is an aspect of the Wauwatosa School District’s plan to ensure and promote an equitable environment for all students.

“There’s a lot of research that points to students of color being more successful when they have teachers that look like them,” Ertl said. “That’s really what it comes down to, if we have a diverse student body we should have an equally diverse staff that works with the students.”

According to the Wisconsin Policy Forum report, “a teacher workforce that closely represents the racial makeup of the K-12 student population it serves holds particular promise as one policy lever (among others) that could support academic performance and aspirations of students of color and mitigate trends in racial achievement gaps.”

Chambers also thinks a more diverse teacher workforce in schools does not only benefit minority students but also “the school’s atmosphere and dynamic will benefit because it’s bringing in diversity which is what the world is made of.”

With a more diverse teacher workforce, specifically an increase in African American teachers, Chambers believes “African American students will have a better outcome as far as behavior and academics because they are being taught by an individual who is definitely able to relate to them across the board.”

The Policy Forum report also suggests teachers of color play an especially important role in education in the time of the recent movements for racial justice and the COVID-19 pandemic.

“In the wake of the pandemic, students of color have been particularly disconnected from the education system. Research suggests that teachers of color appear to be well-positioned to reach those students and push them to succeed,” the report describes.

Wisconsin has some of the nation’s widest racial academic achievement gaps between white and Black or Hispanic students.

According to the 2019 Wisconsin Profile from the National Assessment of Educational Progress (NAEP), Wisconsin had the second greatest score gaps between white and Black students for 4th-grade mathematics and reading in the nation, trailing only the District of Columbia.

“In the context of Wisconsin’s long-standing and severe racial achievement gaps, the severe underrepresentation of teachers of color in Wisconsin schools suggests the state is failing in an area that research has shown to be beneficial in promoting academic and long-term success for students of color,” the report describes.

The Student to Teacher Pipeline for People of Color

Some districts across the Milwaukee area have come together to work to increase the diversity of teacher and staff workforces.

The Wauwatosa School District, along with 37 other Milwaukee area public and private school systems are members of the Closing the Achievement Gap Consortium (CAGC).

According to the CAGC website, the group is a partnership between Milwaukee Area schools and Concordia University “who have united together to create a high impact professional learning community focused on creating greater equity in their schools.”

Through the CAGC, the Wauwatosa School District offers a $2,000 per year scholarship for students of color in the district that enroll in the education program at Concordia to contribute to the district’s student to teacher pipeline.

Ertl says, “There’s not a lot of teachers of color out there.”

This student to teacher pipeline ultimately shapes the diversity of the future teacher workforce.

According to the Wisconsin Policy Forum report, this pipeline depends on the demographics of students “at three key educational junctures: high school graduation, postsecondary enrollment, and participation in educator preparation programs.”

Although the percentage of students of color out of all students at each of these key milestones to becoming a teacher recently increased, it’s primarily due to a decrease in white students rather than a significant increase in students of color.

The report details the current situation in which “the percentage of people of color at each educational milestone has increased over the past decade, but that is not necessarily producing an increase in the number of people of color in the teacher pipeline.”

Furthermore, the possible proportion of people of color who will pursue a career in teaching falls at each educational milestone. Teachers of color also tend to have higher attrition rates.

“Although the share of teachers of color in Wisconsin has been rising in recent years, their numbers remain alarmingly low and their growth has not kept pace with the growth in students of color,” the report concludes. “This has resulted, in part, from the fact that the pool of people of color has diminished at key educational milestones along the educator pipeline.”

Strategies to Increase the Numbers of Employed Teachers of Color

Many districts in the Milwaukee area are focusing on recruiting and hiring people of color from the currently existing pool of teachers.

“In my discussions with other districts, everybody’s in the same position of trying to hire more teachers of color,” Ertl said.

To increase the number of teachers of color in the district, Wauwatosa has worked to take bias out of the selection process during the hiring process.

“We’ve done training with all of our hiring managers and principals to make sure that they’re eliminating bias when they’re looking through resumes,” Ertl said.

Ertl says the affinity group provides “feedback to our human resources and to myself about different things we can or should be doing.”

According to Ertl, the affinity group made recommendations such as that the district “continue all staff development on equity training,” provide “in-depth training on reporting and investigating Microaggressions,” and have “more building-level leadership follow-up equity training.”

“I don’t think anybody wants to go into a building and be the only teacher of color so you want to try to get and hire more people that are going to be teaching our students,” Ertl said.

To retain teachers and staff of color and establish and maintain an equitable environment, all district staff members also undergo specific bias and microaggression training. Ertl says for the last 3 years all district staff has gone through training related to equity.

Ertl believes the most successful method for the district in recruiting and hiring minority teachers comes down to this “training that we’re doing.”

During the last 3 years, the district also constructed district equity plans with goals to recruit, hire, and retain teachers, administrators, and staff of color and specific strategies to do so.

In 2017, a group of teachers, administrators, staff, and parents assembled to “identify specific areas we can improve and/or create equity” and later developed the 2018-2020 Equity Plan, according to the district website. The school district also recently revised its equity plan for the 2020-2022 school years.

“The district equity plan is another step we’ve taken really trying to send the message that it’s not something we’re just putting out there, it’s something we’re actually doing and working hard at,” Ertl said.

Additionally, the district received input from parents and students on their experiences with minority teachers in the district and their impact.

Regarding this input on the impact and importance of teachers of color Ertl said, “Whether it’s conversations or surveys or feedback, based on that we know it’s not just national research that speaks to it. We have students and families in Wauwatosa that speak to it as well. Firsthand knowledge I think is even more important when you look at the local level.”

As a next step for the district in building a teacher workforce that closely represents the diversity of students, Ertl thinks an alternative pathway to teaching should be explored.

“I’ve been having discussions with different colleges and universities about trying to get a program to encourage more students of color to go into teaching, and try to find a different pathway to becoming a teacher that’s different than it used to be,” Ertl said.

Ertl hopes to see a program where students can work to become teachers with a program starting in high school that looks at proficiencies rather than credit and seat time.

With the current training and plans the district has put in place Ertl says, “We want to have a school district that’s inviting to all students, all families, and certainly all staff.”

This story was originally published on West Side Stories on July 29, 2020.