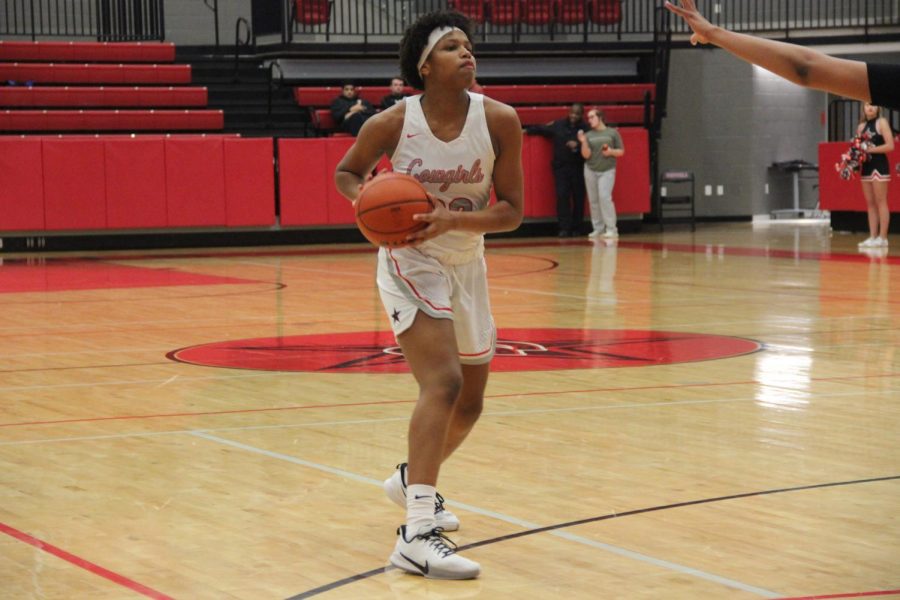 Coppell senior forward India Howard passes against Irving MacArthur on Jan. 21 in the CHS Arena. Howard is one of many students speaking out on social media in support of the NBA strike.

The Milwaukee Bucks’ decision to strike on Aug. 26 – announced just moments before their game against the Orlando Magic – began a domino effect including every remaining playoff team in the NBA.

In just one day, league play came to a standstill in solidarity with the Black Lives Matter movement in the wake of Jacob Blake’s shooting.

Several students took to social media after the shooting expressing their support for the BLM movement, and after the NBA players went on strike, they did so again, specifically in response to conservative commentators’ remarks about athletes staying in their own lane.

“They have a huge platform as basketball players, but that doesn’t mean they’re just basketball players,” Coppell junior Svayam Sharma said. “That’s a racist comment – their sole purpose isn’t entertaining us. They get paid for that, but it’s way more than that. It’s just like the protests: some people don’t like how the protestors riot, but even when players are doing peaceful protests by boycotting, they’re still triggered by that.”

“America runs off entertainment and sports especially, so when they sat out of the game, it brought people awareness,” Coppell sophomore basketball player India Howard said. “Everyone was looking forward to the game, so when they weren’t going on, they made people realize why [players] are not going on, and that brought more attention to the matter.”

Howard is not sure how many people in Coppell would be supporters of the NBA strike, as Coppell has only a small Black population. After the death of George Floyd, similar to Blake’s shooting, Coppell held its own protests. Even though no such event has been organized now, several students are still in support of the movement and inspired by the NBA’s efforts.

“This will go down in history, and will change for a lot of athletes and communities,” Sharma said. “The younger kids who grow up watching basketball are going to see their favorite players are speaking up about this topic and they’re going to be more educated about this [as] they grow up.”

The impact of skipping one game had been widely debated.

“If you sit out for one game and then go back, nothing happens,” Howard said. “People are just going to look past it and not do much about it; it’s like ‘OK, that sucked but now it’s over.’ If they were to keep up with it, real change – or at least more change – would come. The point was to sit out of the game, but now the NBA is saying we’ll have the game a few days later so people are thinking, ‘I can’t watch it Wednesday night but I’ll watch it this weekend,’ so it doesn’t have the same effect as there being no sports.”

On the other hand, according to Coppell junior basketball player Devank Rane, the NBA’s canceling and postponement of the game is its own show of support for the movement.

However, the NBA and its players union reached an agreement in which playoffs would resume on Saturday and basketball arenas would be used as polling places for the upcoming election. These polling places, which the union asked for as part of a plan to promote social justice, are meant to provide safe voting places amidst COVID-19. These spaces would allow for social distancing.

Though all are aware of the topic and largely in support, Coppell basketball players have not explicitly discussed it.

This story was originally published on Coppell Student Media on September 1, 2020.