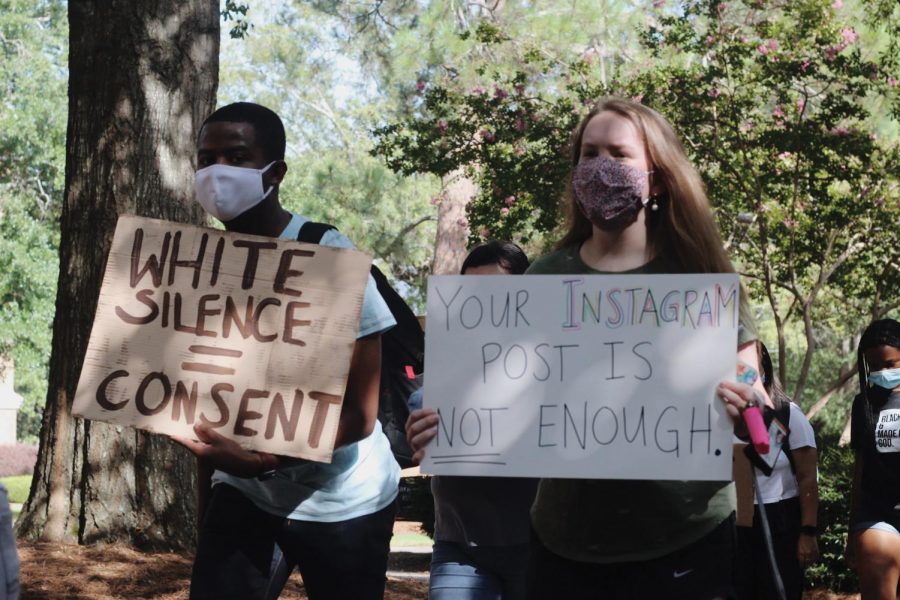 Afterwards, more than 100 demonstrators gathered in Willingham Hall for a rally and vigil where protest organizers read the names of Black people killed in high-profile instances of police brutality and racism in efforts to raise greater awareness of racism in America.

While organizers asked participants not to chant in order to prevent the spread of COVID-19, students brought signs with phrases such as “I may not understand but I stand,” “Not a moment a movement” and other messaging.

“I’m extremely elated and extremely proud of everyone for standing in solidarity and showing support for social justice in America,” Ansley Booker, director of Diversity and Inclusion Initiatives and one of the event’s organizers, said. “I think, again, we are always asking our students to be the change they want to see, and I think they are implementing that change.”

The demonstration came on the heels of large-scale protests this summer prompted by the killings of Black Americans by the police and others, with names like Breonna Taylor, Jacob Blake, Ahmaud Arbery, George Floyd and others taking a prominent place at the protest and vigil.

“What we noticed was that students, faculty and staff wanted a place and an opportunity and even a time — like a safe space — to talk about their feelings and their emotions after these things happened this summer,” Booker said. “Because a lot of students wanted to be called to action. They want to do something physical, tangible.”

Amid those demonstrations over the summer, a social justice book club formed at Mercer to facilitate conversations about racism and other systemic social issues. The idea for a march and vigil started to become real at the book club, according to co-organizer Carol Bokros in the Office of Academic and Advising Services (AAS).

AAS joined forces with Booker’s Office of Diversity and Inclusion Initiatives (DII), along with a number of other organizations, to organize the march and vigil in hopes of raising awareness and educating members of the Mercer community on racial injustices, they said.

“I want all of our students, no matter where they come from and what attitudes they grew up with, to open their minds and hearts and to really listen so that they understand,” Bokros said. “There’s a real problem and we need to fix it.”

And beyond raising awareness of police brutality on a national scale, some participants hoped the protest would shine light on racism that happens within the Mercer community.

“I hope people understand that it’s not something that doesn’t happen here,” student Atia Bailey said. “It happens here. It’s not just the big events and problems. It’s the microaggressions that will make a situation and make campus unsafe. I think the blatant racism is what people think of as racism but no, it’s the little things.”

According to Booker, microaggressions are small acts that make an individual in a marginalized community feel looked down upon, often in the form of backhanded compliments that are based on racial or other stereotypes.

For instance, a microaggression would be telling a Black person that they are well-spoken, Booker said, which is based on the assumption that Black people aren’t often well-spoken.

On top of bringing more awareness to racism, the march and the rally in Willingham Hall also sought to defend the Black Lives Matter movement and discuss arguments leveled against the organization.

“It’s not to say that only Black lives matter,” senior Michaela Jones, of the Student Government Association Merclussion committee, said. “It’s saying all lives do matter — absolutely, I couldn’t agree with that more — but the problem we’re trying to call out is there is a horrible history in our country where we say all lives matter, but the action behind that doesn’t match up.”

At the end of the protest and vigil, the speakers also tried to articulate that a demonstration like that is only one part of the puzzle. And from there, there is a need to take action, they said.

The upcoming presidential election also played a distinct role in the speeches given during the rally in Willingham. Moving forward, Bokros said that they are planning to have political action days, where they hope to set up a table and provide students information about getting involved in political action.

The rally in Willingham included speakers from a variety of backgrounds, including students, faculty members, student athletes, Mercer’s campus minister, Mercer’s chief of police Gary Collins and others.

However, some members of Mercer’s community felt that the rally didn’t go far enough to support marginalized groups, citing the decision to give Mercer Police a platform at an event inspired by a movement against police brutality.

Mercer’s chapter of United for Reproductive and Gender Equity (URGE) released a statement prior to the rally acknowledging that some members felt uncomfortable with the presence of law enforcement at the protest.

“We also want to recognize what it means that Chief (Gary) Collins, chief of Mercer Police, will be speaking,” URGE said in a post on instagram. “At the racial injustice forum that Mercer URGE held in June, we heard from students who had experienced racial discrimination from Mercer Police. Others expressed the lack of safety as members of other marginalized (groups). Some students may feel protesting should move beyond negotiation with the police.”

Collins was the first speaker at the rally and vigil and he spoke about his policing philosophy. Collins said that 40% of Mercer Police’s force “happens to be African American” and that they “do not want any racial injustice, racial bias or anything like that” in their department.

Collins noted how he emphasizes Mercer Police’s role as being “your police department” for Mercer students.

“We got to come together. We got to quit the divisions,” Collins said. “Let’s correct the errors that have been made. I hate to say it, but my profession — we’ve had some stupidity. I mean that. I can’t speak for all departments, but I can speak for my department. We wouldn’t tolerate that. We won’t have that.”

“Chief Collins has always wanted to make sure that they are in support of all students, faculty and staff on campus at all times,” Booker said. “We want to make sure we shine a light on the differences between those police that are educated and trained and are not using deadly force towards minority groups and those that are willing to learn and have those conversations.”

Booker noted that her office has been collaborating with Mercer Police on diversity issues. The Office of Diversity and Inclusion Initiatives are located on the first floor of the Connell Student Center.

This story was originally published on The Cluster on September 8, 2020.