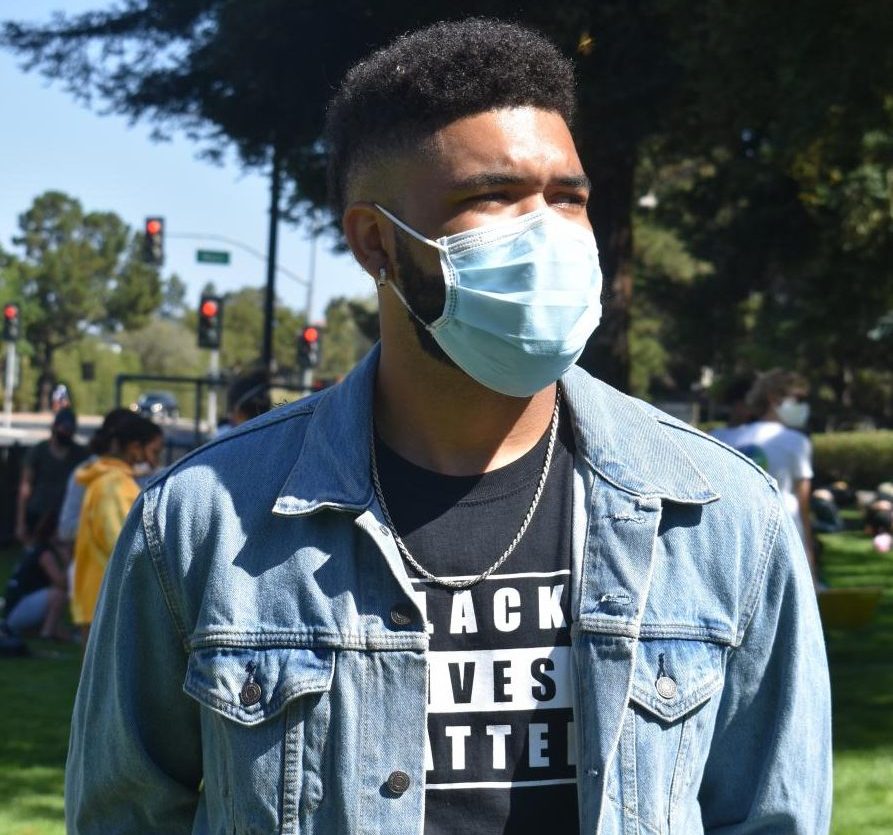 Los Altos High School graduate Kenan Moos, ’16, has battled with racism and discrimination in his community since childhood. As the organizer of the Friday, June 5 Los Altos Black Lives Matter protest, a leader in multiple activist organizations and an independent musician, Moos uses his voice to amplify those of fellow people of color, hoping that one day, they will all "live like kings and queens.”

By Navya Singhai and Isabella Borkovic

The Moos family just bought a new Brother laser printer. Why? Because for the past month, Los Altos High School graduate Kenan Moos, ’16, has been printing thousands of leaflets and flyers nonstop to promote Black Lives Matter events. The family does apologize for all the paper used.

“All I’ve been doing is printing flyers,” Kenan said. “The printer’s in my bedroom, so at night I can just hear whirr whirr birr. The printer pulls it back in, flips the page, nyerr nyerr nyerr. It’s in my head.”

Since coming home to complete his junior year at the University of Oregon online, Kenan has been busy — so much so that he averages four hours of sleep a night, splitting most of his time between activism and summer courses.

Although he only recently became so involved in the BLM movement, Kenan is no stranger to racism and police brutality.

The first incident Kenan can recall was from sixth grade. When the teacher announced his class had to write an essay, a classmate remarked, “That’s gay.” Kenan recalled his teacher’s response: “Saying ‘That’s gay’ is like going up to Kenan and saying ‘Kenan, you’re a n*gger.’”

“That’s probably the first time that I’ve ever remembered feeling completely isolated because I was one of only two Black kids in class then,” Kenan said.

That was just the beginning. Ordinary activities such as playing catch outside his friend’s house and biking with an unbuckled helmet on Almond Avenue resulted in police officers harassing and even pointing their weapons at Kenan.

“I think it was going from sixth grade to seventh grade when everything changed — that was when I went from cute to animal in people’s eyes,” Kenan said.

When hanging out in downtown Los Altos, Kenan would notice store owners keeping an eye on him.

“You’re constantly feeling like you have to do something extra to be accepted the same amount that your other friends would be,” Kenan said. “Anytime I went to a store, I would make sure that I didn’t have my backpack on or people would definitely be looking at me more so than others.”

As he got older, his interactions with the police escalated, especially once he got his driver’s license. In Los Altos alone, Kenan has been pulled over the police 15 times — 23 times in total. He was even questioned by the police while eating a hamburger in his car in the LAHS parking lot.

“We’ve had conversations about how to stay safe, especially once our kids got their driver’s licenses,” Kenan’s mother Toni Moos said. “We told them things like ‘Keep your hands visible.’ We even got Kenan a dashcam for his car after he’d been pulled over several times.”

“There are unlimited stories about the experiences that have happened here, of how I’ve been treated,” Kenan said.

Due to his interactions with the police, Kenan’s parents worry he wouldn’t feel comfortable calling the police if he were in danger, either.

“One of the hardest things as a parent is knowing that our kids will never call the police if they’re in trouble,” Kenan’s father Kevin Moos said. “They don’t feel safe calling the police in any situation, so they’ll do what they need to in other ways to be safe.”
Educating to eradicate structural racism

All of Kenan’s experiences with racism have only fueled his motivation for social reform. As a founder of Justice Vanguard and member of Tha Hood Squad, he spends much of his time working with others to initiate change in the community. Justice Vanguard aims to increase awareness about the systematic oppression of Black people by organizing protests and engaging in local politics, while Tha Hood Squad features media created by artists of color to positively influence the current narrative of Black and brown people in the news.

As a journalism advertising major, Kenan is especially aware of this negative portrayal in the media.

“There are so many positive things that people of color and Black people are doing that are just never covered,” Kenan said.

This extends beyond the media and into schools, as well. While a student at LAHS, Kenan was disappointed by the lack of positive representation of people of color and other minorities in his own education and curriculum.

“I’m Jewish and Black,” Kenan said. “You know what I learned about myself in school? Holocaust, slavery — that’s it.”

He wants to educate people of all races that there are many more positive sides to Black culture than what schools teach. From when Kenan started at LAHS to now, when his younger siblings are rising seniors, the Moos parents have seen almost no changes in how curriculum positively portrays either of their family’s cultural identities.

“If students feel that the only things they are hearing are negative — of oppression, slavery and the Holocaust — then clearly the school can do a better job of showing that were there so many heroes, so many great people to give students a chance to have pride in their ancestry and who they who they are,” Kevin said.

Education in schools isn’t the only thing Kenan wants to change; he also wants members of the community to understand and inform themselves on the hardships and injustices that minorities face.

“Communities need to know what it is that needs to be changed and why there are these issues,” Kenan said. “They shouldn’t just say, ‘Yeah, it’s bad this happens’ — and that’s it. They should ask, ‘What do these things mean?’”

He’s taking it upon himself to educate the community. On Friday, July 3, Kenan held an educational art event at Lincoln Park to inform participants of what local activist groups are doing to educate the community about the BLM movement. Local residents gathered to paint posters saying “Black is Beautiful” and depicting other symbols of BLM, also learning about the movement at FAQ desks adorned with fliers, handouts and more.

In addition to hosting community events, Kenan is creating informative packets to educate specific local residents who have either publicly made racist comments or targetted Kenan with racist statements.

Enclosed in the manila folder is a survey titled “Am I Racist?” alongside articles and educational handouts. These describe topics such as the importance of reallocating police department funding, the lack of diversity in school curriculum and the history of racism in America and Los Altos. In the next few weeks, Kenan will continue to prepare packets, but he won’t be distributing them himself.

“My dad, my white parent, said, ‘I’ll drop it off so if she does call the police, it’s on me, not on you,’” Kenan explained. “He said that with everything going on, he doesn’t want anything happening to me.”

“A Black teenager walking and dropping something off at the mailbox or a door is going to automatically be assumed as if he’s doing something wrong, trespassing or trying to break in because he’s Black,” Kevin said. “I’m white, so I can drop something off and get away with a lot of things because there’s nothing wrong with what I’m doing.”
Expression through art and music

As a Black man with more than a few negative experiences with the police, Kenan often felt he didn’t have a voice; police officers would only believe him when a white friend or adult supported his claims. So he turned to other forms of expression, like music and photography, to convey his story to the world.

“When cops were questioning me, they often didn’t believe me or didn’t seem to listen until some white mom or dad also came in seconding what I said,” Kenan said. “But with music, it was my way of having a voice. It was my way of saying, ‘You can’t not hear me because I recorded this, I got to write and tell my own story how I wanted to.’”

“It Matters,” Kenan’s song about his experiences as a Black man in America, is slated to drop soon. He has also released several songs that he wrote, edited and produced by himself on topics ranging from Mother’s Day to marijuana, all available on Youtube, Soundcloud, Spotify and Apple Music.

As a supporter of his musical journey, Toni has watched her son grow and find a space where he truly feels himself.

“I do not like to listen to explicit music, but that’s the way he expresses himself, and I think he processes a lot of his feelings through his music in that way,” Toni said. “It’s his way of expressing his emotion, his anger, his hurt.”

In addition to his music, as a photographer and videographer, Kenan captures moments at BLM events and posts them on his photography website, Pics by the K. Beyond just taking pictures, Kenan uses art to tell stories that resonate with others.

“I can express exactly how I feel and talk about the pain I’ve been through with music or with images, and it hits harder,” Kenan said. “That’s how you teach people — it’s having the story and feelings play to their emotional side and then backing that emotion up with statistics and facts. If you hit them with a story first, it’s a lot harder for them to be like, ‘You’re wrong. You didn’t get treated like that.’”

Kenan also intends to release a “King K” clothing line in the future. He wants people to “live like kings and queens” and stop doubting their talents and abilities. This idea inspired the design of his brand symbol: a four-pointed crown.

“I’m a quirky-*ss dude; I embrace that,” Kenan said. “It takes a while to embrace that, but once you can, things are so much more fun. That’s where my clothing line inspiration comes from.”

Kenan has discovered his voice in activism and art, and he refuses to let others silence it. He’s independent, and hopes others can be too.

“I do everything because I want to be my own person,” Kenan said. “I don’t want to work for other people. I’ve been working on starting my own company for years. I want to put out my own photography line and have photographers within my brand. I want to have different nonprofits in our communities. I want to strive for a better living, where we’re supporting people of color and minorities. When I see Black and brown kids doing some dope-*ss things, I want to help elevate them in that, so if I have the platform, trust me, I’m going to do that.”

This story was originally published on The Talon on August 17, 2020.