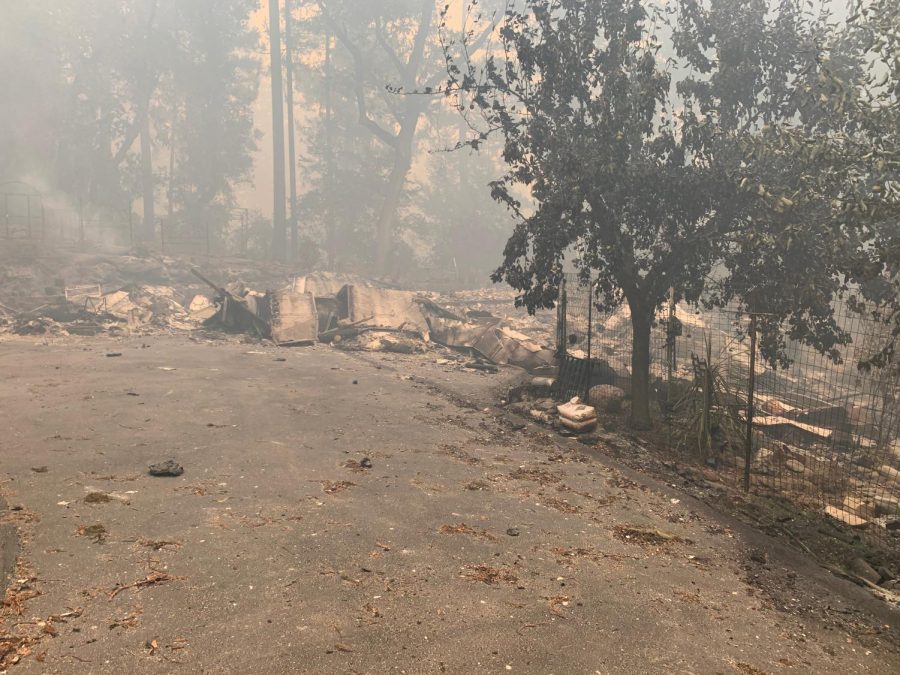 Upper school English teacher Beverley Manning's house was burned to the ground by the CZU Lightning Complex Fire, which has now burned over 86,000 acres. Manning evacuated from the wildfire with her rescued animals.

Since a heat wave struck California on Aug. 14, over 900 fires have rolled through 1.8 million acres, destroying at least 3,400 structures, according to Gov. Gavin Newsom during a press conference today.

Californians experienced extreme heat over Labor Day weekend, with Newsom declaring a state of emergency in the counties of Fresno, Madera, Mariposa, San Bernardino and San Diego on Sunday in response to the recently-started Creek Fire, El Dorado Fire and Valley Fire.

The SCU Lightning Complex, east of San Jose, is now 94% contained, and the CZU Lightning Complex in the Santa Cruz Mountains is 81% contained. Meanwhile, the August Complex Fire, which started in the Mendocino National Forest, is 24% contained and the Creek Fire in Fresno and Madera County is 0% contained. Even with high containment numbers for some fire clusters, Newsom encouraged residents to remain “mindful” of the wildfires.

Upper school computer science department chair and physics teacher Dr. Eric Nelson, whose house is in Boulder Creek, evacuated at 11:30 p.m. on Aug. 18. He is currently staying with family members in San Jose and teaching classes from his classroom at the upper school.

After evacuating, Dr. Nelson has monitored the progress of the fires near his house through satellite. While he is still an evacuee, his house remains intact.

“I’ve been watching the fire lines via satellite, and all it is is red, orange, and yellow dots, that’s all I see,” he said on Aug. 25. “But I can interpret the motion of those dots and watch over 3-hour increments as the fire moves through the mountains and through my neighborhood. And as I watched that over the last week, it’s like watching a tree fall on a child in slow motion. It’s really miserable, because you can’t do anything about it.”

Upper school biology teacher Dr. Thomas Artiss, whose house is in the Bonny Doon area of the Santa Cruz Mountains, evacuated on Aug. 19 after receiving an alert at 1 a.m. His wife had left to drive to Virginia on the same day, so he evacuated with his pets.

“My wife and I had already discussed what to bring in case this happened, so I was pretty efficient in grabbing important documents, photos and a few keepsakes and getting the stuff loaded in the car,” he said in an email interview with Harker Aquila. “We have 4 dogs and a cat, so I had to round up all the animals – and I managed to get off the mountain fairly quickly.”

After initially staying with friends in Scotts Valley, Dr. Artiss relocated to Santa Barbara, where he is now staying with his wife in a family member’s condo, four hours away from his house in the Santa Cruz Mountains. His new living situation has posed challenges. He and his wife walk the dogs more often to keep them from barking in a smaller living situation, and the noisy neighborhood and airport near the condo make Zoom calls more difficult.

“The only thing I ask of the students I teach is to understand that this is not normal for me, and that it’s not the way I usually present myself,” he said. “I am less prepared than normal, I only have 3 or 4 t-shirts I managed to grab so I look less professional on Zoom, I am more distracted than usual.”

As far as he is aware, his house is still standing, although he is expecting significant smoke damage.

Senior Sophia Gottfried evacuated from her house, which is still standing, in the Sky Londa area of San Mateo County at midnight on Aug. 20. After staying in a hotel for a day and a half, she flew to a family-rented house in Florida and has been attending Zoom classes despite a difference in time zones. She and her family are closely monitoring the air quality levels in the Sky Londa region and have booked tickets for a flight back to California on Saturday.

“The first few days [of evacuating], everyone [in my family] was extremely stressed,” she said. “I was having stress dreams about getting burned alive, my sister was all panicky about her ping pong table. It was just that atmosphere of panic. We were so relieved when our front got contained fairly quickly.”

Upper school English teacher Beverley Manning’s house was burned down by the CZU Lightning Complex. Click here to donate to a fundraiser organized on her behalf by upper school director of community service Kerry Enzensperger, director of alumni relations Kristina Alaniz and head athletic trainer Jaron Olson. Proceeds will be going to support Manning in buying a recreational vehicle (RV) to live in until her home can be rebuilt.

Upper school math teacher Dana Lieberman, who lives in the Santa Cruz Mountains, was on high alert as the CZU Lightning Complex burned through parts of the mountains, and she had packed her car in case of evacuation. She is currently still safe and in her home, although the stress accompanying the fires did take a toll and cause feelings of survivor’s guilt.

“With regard to my home, the metaphor ‘we’re almost out of the woods’ comes to mind, but the reality is we will never be out of the woods,” she said in an email interview with Harker Aquila. “27 years ago I chose to live in a forest, and global warming has radically changed what that means.”

This story was originally published on Harker Aquila on September 8, 2020.