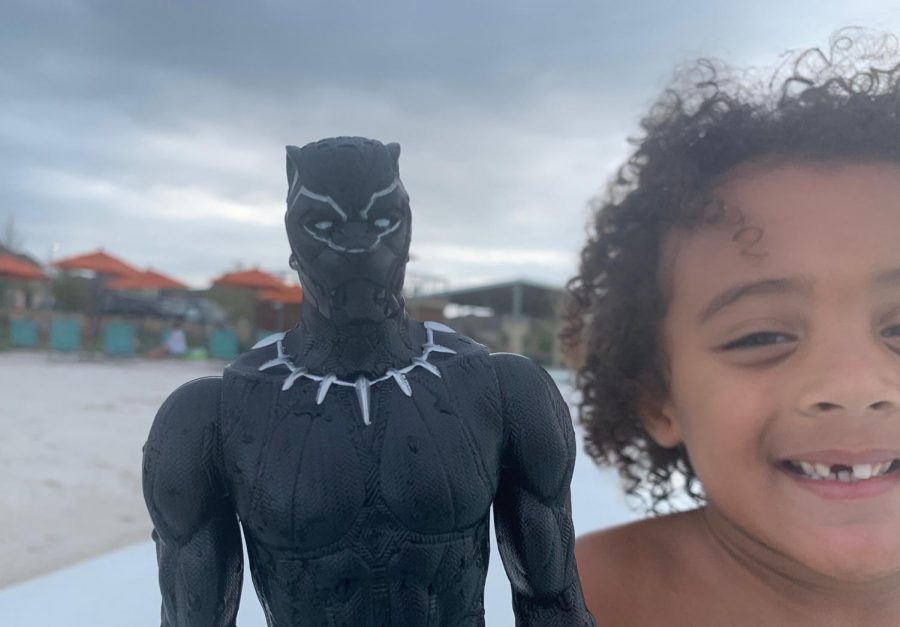 Following the passing of Chadwick Boseman, Black Panther, 4-year-old Drake Freeney plays with a Black Panther action figure. Ashlee Freeney, Drake Freeney's mother, said that having her son identify with a superhero that he sees as similar to him has been huge. "It's been pivotal for him to have a superhero to look up to that looks like him," Freeney said. "He loves how Black Panther is always helping people, it makes him want to do the same."

Parents of young fans worldwide find themselves left with a decision, following the events of Aug. 28, the date on which well-known actor Chadwick Boseman passed away, after a private four-year-long battle with colon cancer. Boseman played King T’Challa in Marvel’s “Black Panther,” and with his death, moms and dads continue to consider whether or not to tell their children of the famous superhero’s passing.

Windsong fourth-grade-teacher Ashlee Freeney has a 4-year-old son, Drake, who she said “looks up” to Black Panther, not only for how the superhero helps people, but also for how Boseman brought representation for children who grew up seeing predominantly white superheroes.

“I think it (Drake’s love for Black Panther) really just started when he told us, ‘Hey, he looks like me,'” Freeney said. “To have him have a superhero that he can identify with is really special. His dad said how pivotal it could have been for him growing up, seeing a hero that represents him. Having that has been huge for Drake.”

A possible explanation for parents’ struggles to tell their children of Boseman’s passing can stem from one truth they identified: Boseman brought diversity to the superhero industry.

“Kids got to see another hero that might look like them,” Windsong fifth-grade-teacher and longtime Marvel fan Matthew Diehl said. “He (Chadwick Boseman) opened the door for the whole universe as a star for a comic movie.”

Other fans believe that Black Panther was a superhero in real life, too.

“(Black Panther) was fighting for his country,” sophomore Kaitlynn McDermott said, “which was something cool to watch.”

For parents, the fact that Boseman brought so much truth through fiction leaves mothers and fathers like the Freeney’s struggling to share the challenging reality.

“Every time he (Drake) sees him (Chadwick Boseman) on TV, he says, ‘Hey, that’s Black Panther!’ and we just decided that it is not age-appropriate for him to know that he (Boseman) has passed,” Freeney said. “He understands that characters die, but the fidelity that’s attached to that is something that we really don’t want him to understand just yet. We don’t want to steal that innocence from him.”

Other parents such as Leah Waters, a Frisco Independent School District teacher and multiplatform editor for The Dallas Morning News, has a five-year-old son named Charlie who is a fan of Black Panther as well. Waters decided that she needed to tell her son of Boseman’s passing.

“At first, I didn’t want to tell Charlie that Black Panther had died,” Waters said. “It just felt like crushing a kid’s dreams that superheroes are invincible. We like to believe those things when we’re kids: that people live forever. But they don’t. Talking to young kids about death is hard because they grow up just a little faster than you want them to. You want them to stay little and innocent of the cruelty of death and life.”

Waters said she believes at some point in a child’s life, “you have to sit down and have hard conversations with them.”

“The funny thing is, when I showed Charlie the front page of The New York Times last Sunday and told him T’Challa had died, he didn’t cry actually. He was just curious,” Waters said. “He (Charlie) asked why. ‘What killed him?’ ‘Why does cancer kill people?’ ‘Will there be no more Black Panther?’ He was questioning things. And to me, that shows me he desperately wants to understand the world around him. How could I not want to help him understand it? How could I hide things from my kid, even the hard facts of life, just because it makes me scared or uncomfortable?”

This story was originally published on Eagle Nation Online on September 10, 2020.