The "folklore" album cover features Taylor Swift standing alone in a forest, looking up at the trees.

On July 24, Taylor Swift released her 8th studio album titled “folklore.” Unlike her previous albums, this album came as a surprise as Swift announced its release less than 24 hours before it dropped. Despite the lack of promotion prior to its release, “folklore” broke multiple records, becoming the best-selling album of 2020 within one week and making Swift the first artist to debut on both the Billboard 200 and Hot 100.

Over the past several years, Swift has undergone a musical evolution, shifting from country to pop, a genre she is now incredibly well-known for. Her latest album experiments with other genres, such as indie-folk and alternative pop — genres she has never ventured in before.

In isolation my imagination has run wild and this album is the result, a collection of songs and stories that flowed like a stream of consciousness. Picking up a pen was my way of escaping into fantasy, history, and memory. I’ve told these stories to the best of my ability with all the love, wonder, and whimsy they deserve. Now it’s up to you to pass them down. folklore is out now. 📷: Beth Garrabrant

As a big fan of Swift, particularly of her lyricism, I was intrigued to see how “folklore” would be different from her previous albums — and after fully listening to it, I was amazed. “folklore” is a treasure chest of meaning for those who are interested enough to look, revealing a more mature side to Swift’s music and containing Swift’s most ingenious lyrics to date. Here are five songs I wanted to highlight from the album.

In “the last great american dynasty,” Swift weaves the past with the present by narrating the life of Rebekah Harkness — the previous owner of Swift’s Rhode Island mansion. “the last great american dynasty” stands out on “folklore” due to its contemporary pop sound. The upbeat rhythms make the song more lighthearted compared to the album’s other tracks, but the lyrics’ vivid storytelling makes it feel right at home in “folklore” — and adds a truly fascinating element to the song.

Details in the lyrics such as Rebekah thinking about “her saltbox house,” filling “the pool with champagne” or losing “card game bets with Dalí” immerse me in the moment. Throughout the song, I feel like Swift is sitting right in front of me and telling me about Harkness’ life herself. Part of this feeling comes from the song’s structure: the first choruses hint towards the public’s harsh criticism of Harkness, as they end with “She had a marvelous time ruining everything.” However, after the song’s bridge, Swift inserts herself into the story, now saying “I had a marvelous time ruining everything” — a parallel between her and Harkness that gives me the sense that Swift is telling me a bedtime story and adding simply her own remarks.

“the last great american dynasty” also stands out due to this single lyric: “And in a feud with a neighbor / She stole his dog and dyed it a key-lime green.” Harkness, in fact, dyed a cat green, and Swift’s choice to change cat to dog is one that, many speculate, was done intentionally to make the song a piece of folklore that was changed through word-of-mouth. In that way, “the last great american dynasty” is a truly fascinating (and kind of meta) song that perfectly encapsulates the album’s name.

Although I’m not usually a fan of sad songs, it only took a couple of listens for “my tears ricochet” to become one of my favorites from “folklore.” The track begins with eerie, almost ghostlike vocals in the background, immediately setting the mood for the song’s dark concept. In the lyrics, Swift takes on the perspective of a dead woman and conveys her bitterness towards an ex-lover at her funeral through lines such as, “Even on my worst day, did I deserve, babe / All the hell you gave me?” and “And if I’m dead to you, why are you at the wake?” Despite the anger that the lyrics portray, Swift sings the words softly. The juxtaposition of her tone of voice and the lyrics denotes that Swift is emotionally exhausted — a thought that punches me in the gut more than if she had been furious.

As the song continues, the background music becomes more complex as percussion joins the melancholic vocals. At the same time, Swift’s voice grows stronger, almost as if Swift is becoming more sure of herself as she talks to her ex-lover from the grave. 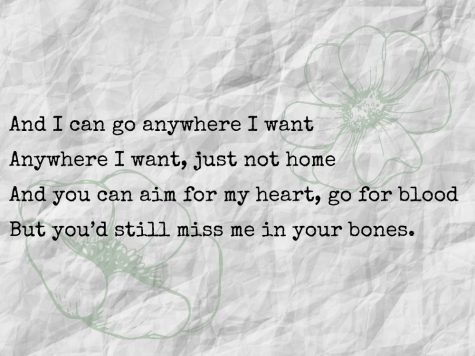 What makes the song particularly poignant is how it displays that Swift and her ex-lover both continue to affect each other even after the end of their relationship.

Hearing the song’s bridge feels like I’m being impaled in the heart, as Swift sings, “And I can go anywhere I want / Anywhere I want, just not home / And you can aim for my heart, go for blood / But you’d still miss me in your bones.”

While the media often shows broken, cliche relationships as one person finding happiness while the other continues to hurt, “my tears ricochet” shows a more realistic portrayal: it’s not always that easy to move on for either side. After all, within the storyline of the song, Swift is dead, and her ex-lover is left anguished despite everything. Altogether, the honest lyrics coupled with the morbid metaphor of a funeral makes “my tears ricochet” one of Swift’s most heart-wrenching ever.

As soon as “invisible string” began, I knew right away that the song was going to be different from all the others on “folklore.” While many of the album’s tracks deal with heartbreak, infidelity and moving on from past loves, “invisible string” describes an invisible string of fate that has connected two people throughout their lives even though they weren’t aware of it.

The track contains many aspects of Swift’s familiar mainstream style — descriptive, scene-setting references to past events (possibly from Swift’s real life), and a romantic atmosphere — but what makes “invisible string” different from Swift’s other songs about being in love is its sense of newfound acceptance. The gentle plucking of a guitar gives the song a content atmosphere, and Swift’s steady, mellow voice throughout the song complements the music perfectly.

In the lyrics, Swift takes on a contemplative tone as she looks back on her past, from when she used to wish she would “meet somebody” at Centennial Park, to her and her lover’s “three-year trip.” This type of retrospection is very similar to songs from Swift’s ‘Lover’ album, and the background music is reminiscent of her older country works, yet “invisible string” slots perfectly into its spot on “folklore” because of its soft atmosphere and artistic descriptions.

As Swift sings, “Time, curious time / Gave me no compasses, gave me no signs / Were there clues I didn’t see?” I’m reminded of how uncertain everything is, and how we can never fully understand it until it’s all over. Despite that, “invisible string” makes me feel like no matter what happens, everything will work out in the end.

In “betty,” Swift takes an unfamiliar stylistic route — all the characters and events narrated in the song are completely fictional. The lyrics are in the perspective of 17-year-old James, who feels guilty for cheating on his girlfriend Betty over the summer and now wants to plead for her forgiveness. This boy-cheats-on-girl-then-regrets-it storyline would normally be a boring cliche, but the music and lyrics work together to prove otherwise. 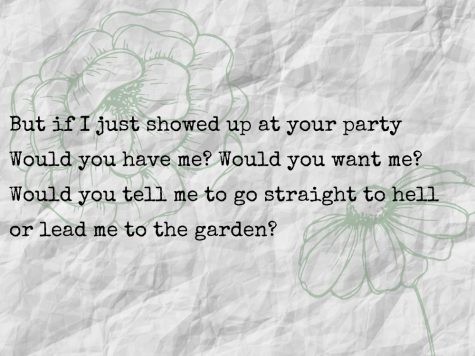 In the lyrics, the first-person perspective immerses me in the experience of James’s youthfulness and vulnerability. The chorus feels like a rambling inner monologue as James fires off question after question in speculation: “But if I just showed up at your party / Would you have me? Would you want me? / Would you tell me to go straight to hell / or lead me to the garden?” Along with that, the specific references to high school, such as Betty switching her “homeroom” or the “far side of the gym” at a school dance, give me feelings of nostalgia — even though I’m currently in high school myself.

Perhaps the most memorable feature of the song, however, is the use of harmonica in the music, which gives the song a classic, vintage feel. Together with the lyrics, the old-timey music adds to the song’s sense of youthfulness.

The storyline hits its climax during the last verse and chorus when the lyrics shift from simple pondering to real-time and Swift’s voice goes from nervous to almost desperate. “Would you have me? Would you want me?” turns into “Will you have me? Will you love me?” at the same time that the music crescendos and the key changes — a uniting of the song’s elements that tugs at my heartstrings as I listen to James make his final stand.

“betty” never confirms what happens to James and Betty’s relationship, but the story doesn’t end when the song does. During a live chat prior to the album’s release, Swift revealed that there are three songs that she considers to be the album’s “Teenage Love Triangle.” While the specific songs have not been confirmed, it is believed that the trilogy consists of “betty” (from James’s perspective), “cardigan” (from Betty’s perspective), and “august” (from James’s love affair’s perspective). On its own, though, “betty” has demonstrated that cliches can be done in original ways — and that some stories just work so better with music.

“folklore” balances the familiar with the unfamiliar exceedingly well. Swift is known for her narrative songwriting, but this album seems to go above and beyond in its artistry and detail. What packs emotion into every track, however, is the softer, quieter music. Not only does it suit Swift’s voice, but it makes the songs feel mythical and otherworldly, like I’m glimpsing into someone’s innermost thoughts and feelings.

Throughout the album, this sound is consistent — not a single track seems out of place. In fact, all the songs seamlessly complement each other. Whether it’s the repetition of concepts or the scattered references (movies in “the 1” and “exile”; cardigans in “cardigan” and “betty”; summer romance in “august” and “betty”), the songs seem to connect to each other in subtle ways, making the album much more thought-provoking.

Some say that “folklore” is reminiscent of Swift’s previous album, “Lover”, and her older country music, but the album marks a change in style that may not be for everyone. Many people know Swift for her pop songs, such as “Love Story,” “Shake It Off” and her previous single, “You Need To Calm Down.” For this reason, listeners who are only familiar with Swift’s music from the radio may not enjoy the album’s departure from her usual sound, finding it too quiet or not upbeat enough. Alternatively, those who don’t know the album’s fictional concept may believe that Swift is going down her usual route, writing songs peppered with personal experiences, and get the wrong idea from some of the tracks.

Swift has shown herself to be an incredible pop artist over the last several years, but “folklore” has given the world a glimpse further into Swift’s potential. “folklore” proves that Swift isn’t just a pop princess — she’s got some new tricks up her sleeve. And I’m eager to find out what she’ll pull out next.

This story was originally published on El Estoque on August 22, 2020.