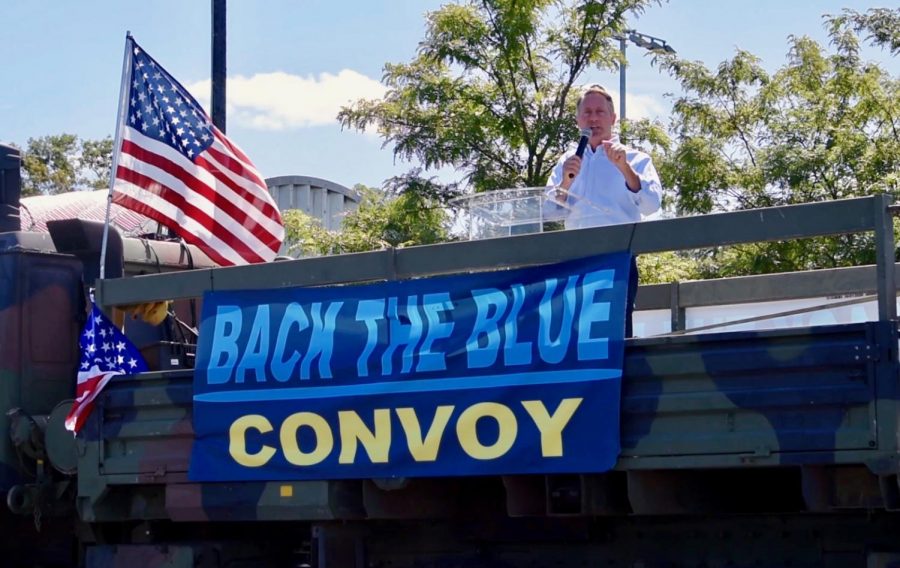 Former Westchester County Executive and candidate for New York State Senate Rob Astorino speaks at a Back the Blue Rally in Tarrytown on Sept. 12. The rally and ensuing convoy drew a crowd of a few hundred.

By Logan Schiciano and Mitch Fink

“Make America Great Again” and “Thin Blue Line” flags were scattered throughout the crowd at a Tarrytown “Back the Blue” rally on Saturday afternoon, as several prominent law enforcement officials and local politicians took the stage to denounce violence in Democrat-run cities, and voice their support for police and other first responders.

Following the rally, which took place at the Tarrytown waterfront, hundreds of attendees packed into their vehicles and drove in a convoy across the Mario M. Cuomo Bridge into Rockland County.

Hawthorne resident Jennifer Martall attended the rally on horseback as she waved a “Thin Blue Line” flag in support of law enforcement.

“We support [President Donald] Trump and the police. We love everything that’s happening. Without the police, we wouldn’t have anything,” she said.

Peter Macaluso, a retired police officer from Peekskill, N.Y. was highly critical of Presidential Nominee Joe Biden and painted a dark picture of what he believes America will become if the democrat is elected in November.

Rob Astorino, former Westchester County Executive and Republican candidate for New York State Senate District 40, addressed the crowd from the podium, which was perched atop a military-grade truck.

Astorino told Tower he believes the violence in the streets of cities like Portland, Ore. and Seattle, Wash. are a separate issue from the police brutality which incited the unrest.

“Police brutality is not acceptable on any level, and you won’t find one police officer who doesn’t believe police brutality isn’t unacceptable. But those [instances of racially-charged police brutality] are isolated incidents by and large. You deal with the millions of police calls each year,” he said. “What’s happening in cities like Portland, Seattle, New York, Chicago and many others is outright violence and anarchy.

Astorino also strongly denounced the Black Lives Matter movement, saying that while he believes that Black lives do matter, the “Black Lives Matter” organization is “communist” and “standing against American values.”

Rev. David Lothrop, the chaplain at the Clarkstown Police Department in Clarkstown, N.Y. shared Astorino’s views on the violence.

Lothrop said. “There’s always a bad apple. But because of what happened to one or two individuals, you cannot hold that against a whole country.”

Black people are three times more likely to be killed by police than White people, despite making up just 13.4% of the U.S. population.

While social distancing was generally maintained at the event, very few attendees wore masks, including Don Knight, who praised Trump’s “measured” response to the coronavirus. The virus has led to the death of over 190,000 Americans.

“This is something no one has ever dealt with before,” he said. “He [Trump] listened to the experts and took some bold steps that were criticized initially, but have come to fruition.” Knight also claimed that Trump never “intentionally downplayed” the virus. However, in a recently released interview with journalist Bob Woodward, the President admitted he had done exactly that.

There was no counterprotest to the event, but a petition was circulated in a local Facebook group calling on Tarrytown town officials to disavow the organizers of the rally, remove signs promoting the event, not provide a protected route to the central business district of the town and require that the rally comply with noise, traffic and littering orders.

The petition, which was signed by over 630 people,  argues that the ‘Back the Blue’ movement is a “direct response to the demand for accountability for institutionalized racism,” and that it is “rooted in White supremacy,” in the rationale for its requests.

Regardless of viewpoint on the issue of police brutality and the resulting protests, all eyes are on Election Day, Nov. 3, as the key date to determine the future direction of the nation.

Astorino said in his speech, “There is a cancer in America. But this cancer has chemo[therapy] – and it’s voting in November and very loudly saying, ‘No. That’s not what our country is about and we will not accept it.’

Eligible voters in New York can register on the New York Government website.

This story was originally published on Tower on September 13, 2020.