WeChat and TikTok to be banned from the United States 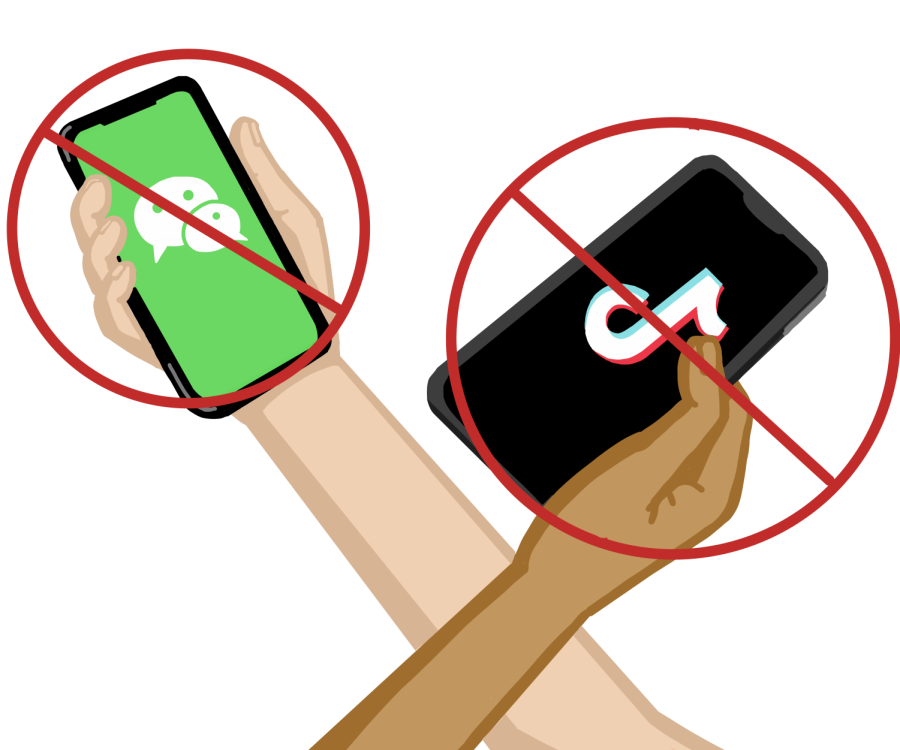 National security concerns prompted President Trump to issue two executive orders banning U.S. citizens or permanent residents from transaction with the owners of WeChat and TikTok. The orders go into effect on Sept. 15.

On Aug. 6, President Trump issued two executive orders that prohibit U.S. citizens or permanent residents from transacting with the owners of WeChat or TikTok, citing national security concerns as the reason for the orders that would take effect on Sept. 15.

This essentially gave American companies 45 days to purchase the U.S. operations of TikTok, especially placing pressure on Microsoft and ByteDance Ltd (TikTok’s parent company) to work out a deal. In the meantime, both WeChat at TikTok can still be used in the U.S.

The national security concerns that prompted the orders lay in the security and privacy of data of the social networking apps. While the two are vastly different, with TikTok focused on sharing videos and WeChat handling several functions such as messaging, payment and taxi, both collect extensive user data. U.S. officials are concerned about the Chinese government having access to the data of U.S. users and using the apps to spread propaganda.

With 100 million Americans using TikTok to connect, inspire and express creativity the ban would “strip the rights of [its] community.” The app is popular among teenagers and young adults, and many creators rely on it as a source of income and a place to reach large audiences. The scope of the app is not limited to its users alone, with its videos being reposted onto other social media platforms, and its trends being followed by many in daily life.

“I’ve definitely seen a lot of TikTok songs on the radio and I’ve seen a bunch of the dances make their way into culture,” Boulus “BB” Ajlouny (10) said. “In terms of the TikTok community [the ban] would definitely be impactful…everyone would either be scrambling to find these other platforms that are very similar to it or trying to copy it and follow their favorite creators, but in my opinion, if TikTok is banned, it won’t ever be the same.”

In the midst of the potential ban, there have been services similar to TikTok surfacing. One such example was Instagram Reels, which was launched in the U.S. on Aug. 5. This new functionality within Instagram has characteristics like those of TikTok, allowing users to record, add effects to, overlay audio on and share 15-second videos.

The other app in question, WeChat, is used universally not only for messaging and posting updates, but also for functions ranging from mobile payments to hailing taxis.

“For most Chinese households and even for me, [WeChat is] usually most[ly] for communication between your family and friends,” Melody Luo (11) said. “Even in the states, where WeChat isn’t as widespread or prevalent as what you would see in China, you would still contact your grandparents through WeChat call or your friends back in China.”

Besides regular users of WeChat, organizations reliant upon it would also be affected. The International Outlook Foundation (IOF), founded by Ellen Guo (‘20) and Tiffany Zhao (‘20), for example, aims to improve the quality of education in non-financially-advantaged areas.

“For IOF we have a lot of connections everywhere, so for example, we have our officer chats, but then we also have chats…with the high schools in Shenzhen that we’re working with and also other chats with the principals of the rural schools we help support,” Jessica Zhou (10), the co-president of the Harker branch of IOF, said.

The organization uses multiple functions of WeChat, such as the chat feature for communication within the organization and with contacts in China, as well as WeChat pay for sending over donations.

In the community, many group chats are made with the specific intention of focusing on one topic. People in these groups do not necessarily know each other in-person, but can learn about different opportunities in the community such as extracurricular class recommendations from others in the group.

“Interest-based groups such as those for education have basically become a virtual community based solely in WeChat,” Huiyang Yang, a Harker parent, said.

Even with the pandemic, users of WeChat have found new ways to use it. Several organizations who handle grocery shopping and drop off goods at homes function through WeChat.

“Now, buying groceries in quarantine these couple months, for me, has been completely dependent on WeChat,” Yang said. “If I didn’t have this ability to grocery shop [through WeChat], it would be very inconvenient.”

While other methods of communication besides WeChat are widely available and used in the United States, many also use WeChat to keep in touch with those in China. With its ban, users would have to get alternate contact information from everyone they wish to keep in contact with.

“Other platforms might not necessarily work in China or it would just be really slow,” Jessica said. “ We have to reestablish all connections.”

Shifting over to other platforms may cause many to have to learn how to use the platforms that may be new to them.

“If I’m, for example, contacting my grandparents in China, usually we would use the WeChat call function, which would be…better than FaceTime, at least for the older Chinese population because it is something that they’re more accustomed to,” Melody said.

Note: Harker Aquila’s interview with Huiyang Yang was originally conducted in Mandarin and translated to English.

This story was originally published on Harker Aquila on September 11, 2020.