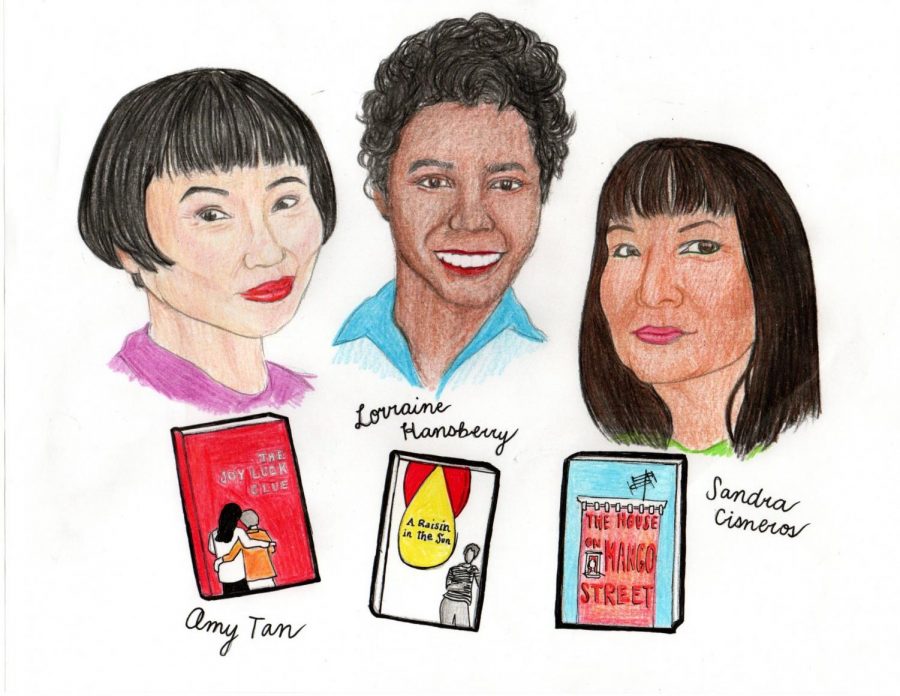 A national push for increased inclusion of figures of color in public school curriculum has become local. The campus may be quiet, but that doesn’t mean the student body isn’t bustling with activity.

In the wake of nationwide protests, many students and faculty have become involved, or intensified their involvement, with local activism — but the conversation has been forced online. Petitions, statements and demands, collaboration between individuals and organized activism are all being adapted to the digital world.

According to the Diversify Our Narrative petition letter addressed to school boards across the nation, “high school is an optimal time to incorporate anti-racist narratives into curriculum because it is the last time they will be enrolled in mandatory schooling. Not everyone chooses to attend college after 12th grade.”

This petition letter outlines a set of guidelines that the writers believe the curriculum of English classes ought to follow.

While many guidelines are delineated, the main proposal in the letter is that “a minimum of at least one book in every English/Literature and Comprehension class be by a person of color AND about a person/people of color’s experience(s).”

“As one of the few Black students at Oak Park High School, I hadn’t seen my culture’s history in textbooks or read any books by people of color,” Burrell-Stevenson wrote to the Talon on why she was motivated to join the movement.

The Instagram page has a variety of functions, including displaying informational content, addressing administrators openly and publicizing content — with consent — that is created by unaffiliated students.

“One of my roles is to manage our social media account and ‘share our story,’ which means that I collect accounts of racism, any form of discrimination, and microaggressions that students have experienced and post them on our story and feed anonymously,” Nori wrote to the Talon.

One such account was written by senior Zoe Berger. Berger’s short essay focused on the lack of authors of color in the OPHS curriculum. She points out that the first novelist was a Japanese woman.

“For a medium invented by Lady Shikibu, it is one that I believe should be represented in our curriculum with more diversity,” Berger wrote in her short essay.

Berger agrees with the mission of Diversify Our Narrative, but she also believes that the curriculum must also incorporate works by people of color about things other than race.

“While people of color are certainly best equipped to tell these kinds of stories, they should not be regulated to them. Diverse authors have a wealth of creativity and skill,” Berger wrote to the Talon. “People of color deserve more focus in our curriculum, but they also deserve to be given attention for more than their race.”

This movement goes beyond the Diversify Our Narrative campaign. In a letter addressed to Superintendent Tony Knight and Principal Kevin Buchanan, OPHS students and alumni make a series of demands, including, among others, the institutionalization of non-Christian holidays (beyond the few that are currently institutionalized), the inclusion of cultural competency training and, of course, a curriculum featuring more people of color.

“OPUSD and OPHS must do a comprehensive review of course curricula and update them — in continued collaboration with communities of color — to include the experiences and contributions of marginalized peoples in the U.S. and around the world,” states the letter.

“This is just the beginning with what we can do now with books already approved by the Curriculum Council,” English department chair Kathy Bowman wrote to the Talon.

Additionally, two new Senior Options classes are being developed by English teachers Leslie Miller and Jennifer Hankins that address these issues. While the courses are not finalized, the teachers hope to launch these classes in the 2021-2022 school year.

“These are changes that we have been looking at for some time, and given the state of our world and country, there is now a sense of urgency,” Bowman wrote.

Hankins hopes to develop a course focused on social justice movements, both historical and contemporary, including but not limited to the Civil Rights Movement and the Indigenous youth group movement against the Dakota Access Pipeline. The class will culminate with students writing in-depth research papers about a movement of their choice.

“Students will be expected to read analytically, participate actively, and reflect deeply through their writing,” Hankins wrote to the Talon.

Just as distance learning has affected student activism, so has the effort to make curriculum and instruction changes.

“Distance learning provides new challenges as we all acclimate to a new platform,” Bowman wrote to the Talon. “However, as difficult as it may be, we are determined to drive this change forward whether it’s remotely or in person.”

Associated Student Body President and senior Anna Stephens played a critical role in forwarding this curriculum change. She reached out to the English department and offered to help facilitate the process.

“Her email presented us with a perfect opportunity to begin our move forward — working student representation; one who was elected by the student body to represent their voice,” Bowman wrote to the Talon.

Stephens has always had a passion for social justice, and she felt that her unique position allowed her to contribute to this change.

“I felt called, as Student Body President, to uplift the voices of community members and help create the changes that they were calling for,” Stephens wrote to the Talon. “The goal is to create a campus environment and community at large that is more just and equitable for all.”

Stephens has worked collaboratively in her efforts to change the curriculum. She thinks that social justice ought to be a group, not an individual, effort.

“My role entails amplifying the voices of those who want to be heard and serving as a liaison between stakeholders and the English department,” Stephens wrote. “I’m so inspired by the people I’ve come into contact with and hope to continue this work until positive change is made.”

Stephens thinks that the curriculum change shouldn’t stop at the incorporation of texts into English classes.

“Social justice can also be examined in other areas aside from English, which is something our school can hopefully pursue in the near future,” Stephens wrote to the Talon.

Similarly, the letter to Knight and Buchanan makes demands beyond the incorporation of texts with authors of color in the English curriculum, including changing the curriculum in history, economics, geography, biology, psychology and health classes. The same letter also makes demands beyond the curriculum, including promoting diversity in the hiring process, mandatory cultural competency training and providing accommodations for non-Christian holidays.

“Administrators must fully commit themselves to combating racism and anti-Blackness. OPUSD’s Diversity and Equity Task Force is not, in and of itself, a sufficient response to these deep and systemic issues,” the letter states.

Stephens agrees that activist efforts must extend beyond diversifying the English curriculum.

“The movement isn’t over until the Black community and other mistreated groups receive the long-overdue justice and equity they deserve,” Stephens wrote to the Talon.

Stephens believes that one of the next steps is enlisting third-party assistance in her efforts within the district. She hopes to work with Dr. Linda McKenzie, who runs a program called Global Empathy Training Academy.

“Before many other changes can take place, we all need such guidance about how to navigate making change. With OPHS having a predominantly white staff and student body, people tend to avoid uncomfortable discussions related to racism because these issues don’t affect many students and teachers personally,” Stephens wrote to the Talon. “But that’s where empathy comes in, and that’s why we need Dr. Linda McKenzie to continue making progress as a community.”

While Stephens holds that there is progress yet to be made, she is optimistic about both what she has already achieved and what is yet to come.

“It feels like our generation has mobilized,” Stephens wrote to the Talon. “And now that we have the world’s attention, activism is abundant in all its forms.”

Berger acknowledges that neither she nor anyone else knows exactly how to proceed in this situation.

“As someone raised in the veritable bubble of Oak Park, I thought it was important to educate myself about this issue and read books by POC and about their understanding of race,” Berger wrote to the Talon. “I’m going to make a fairly boring recommendation: read more and listen more. It is better to be receptively ignorant than willfully incorrect.”

This story was originally published on The Oak Park Talon on September 11, 2020.