How local musicians have adapted to the ongoing pandemic 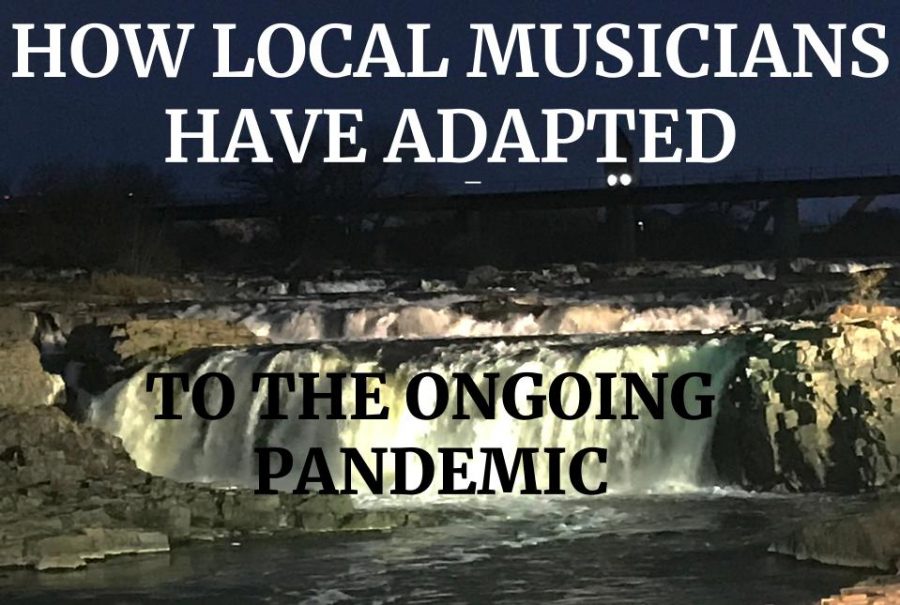 The nature of music, especially its live variant, has radically changed. How are local musicians adapting to the new normal?

For many, music is the primary form of recreation, especially if it involves playing rather than just listening. Recently, however, musicians across the globe have been jolted into a radical shift of how they perform or compose music, and this includes many musicians right here in Sioux Falls.

Since mass gatherings and contact with others has been rightly limited over the past few months, performing in-person live music or collaborating to produce new music has become much more difficult. Whether it is to make a living or just a hobby, musicians across the city and world have had to come up with alternatives to their usual routine. One such musician is Thomas Hentges, singer and songwriter of Burlap Wolf King.

Hentges has not seen his full group together since the last time they rehearsed, which was the second week of March.

“My creativity has been completely stunted by the pandemic but also just the state of and division of our country right now,” said Hentges. “It’s hard to find the energy to try and be super creative right now.”

Although they have released multiple albums and have been together for much time, Burlap Wolf King is presently not an active band. Still, Hentges has publicly performed three times since March. Early on in spring, Hentges performed on his front porch for the neighborhood; then, he performed in a livestream with Megan DeBoer (who does backup vocals for the band). Furthermore, in April the band digitally released a new single. But pro tempore, Hentges wishes to avoid public performances.

“I don’t feel good about it—I don’t want to be part of the reason why people congregate in larger groups right now,” said Hentges. “The more we try to push this to happen too fast, the longer it’ll take for everybody.”

The most recent performance of Burlap Wolf King was at 605 Made Night on Aug. 25, outside of Cherapa Place, which was organized by some close friends of Hentges. Had that not been the case, Hentges would have been strongly inclined to cancel. However, he feels like such a performance was a unique opportunity.

“With everything that’s been going on in the country, it has weighed extremely heavily on me,” said Hentges. “That gig, I didn’t feel like my vocal was strong… the emotions of what’s been going on definitely were coming out; it was therapeutic in a way.”

In spite of all this, Hentges still gets songwriting ideas, but his biggest struggle is deciding what the song is about or what it is getting at subconsciously.

“[Getting] at the root of all that, with everything that’s been going on… doesn’t feel important right now,” said Hentges. “I’m not a ‘working musician.’ I empathize with [musicians] who are without a paycheck now, but I’m also envious of all that time. It’s tough just trying to find a balance.”

However, none of this is to say that Hentges and Burlap Wolf King are completely impeded right now; as mentioned prior, Hentges conjures songwriting ideas often, principally through what he calls ‘moments of inspiration.’ He keeps a digital recorder full of constantly evolving song ideas. Therefore, Burlap Wolf King still has many prospects ahead, and they will continue developing new, constantly evolving pieces.

“Some of the best things I’ve recorded take me four or five years to go from when it was first just a little seed and eventually it becomes a full song,” said Hentges.

Another musician in the Sioux Falls community and, in fact, our school is Isaac Shelton, under the label SlowDown. He has spent the past few months working on an album which is set to come out in spring 2021.

“I use this music as more of an emotional outlet… it’s my way of dealing with my own inner thoughts and way of getting something out there,” said Shelton.

Shelton believes that music, especially in his studio, has been the best way to deal with everything.

“Having my own creative space where I could go in and nothing mattered except what I was working on really helped,” said Shelton.

Since school has started again, Shelton believes the composition process has been facilitated. It has also allowed him to incorporate a vast array of previously less used elements into his music, such as strings and synthesizers.

“The goal for me personally is to release some anxieties I have and get my thoughts out there. Another one is so people can maybe hear it and be inspired to start a discussion,” said Shelton.

Shelton started working on the previously mentioned album at the beginning of this summer, where he had one song idea but quickly realized it could not be contained in only one song. Shelton views this upcoming album as cerebral and psychedelic.

“You go into this dreamworld and you’re like, ‘Wow, there’s something inside of me that’s better than what’s out here. So, if I could just stay here, that’d be great,’” said Shelton.

Later in the album, which is set to have 12 tracks upon completion, Shelton explores the human psyche, trying to tell a story through the music about how futile running from one’s problems is. This complex idea has been in the works for months, since Shelton first came up with the concept; in fact, the whole idea arose because of the pandemic.

“[Early on,] I had a lot more time with myself. I was really struggling with who I was,” said Shelton. “I had a dream that felt like nothing else. So, this idea of living in this dream state and not actually facing my issues came up. It helped me get through that while also making a story. It killed like seven birds with one stone,” said Shelton.

Given that Shelton has not done many live shows in the past, he was not too severely hit by that aspect of the pandemic.

“It made a few things easier… I started to think a lot more about music. I loved having time to myself if it was in short little doses,” said Shelton.

Shelton remains optimistic but cautious about the future of music, especially local bands, which he believes rely primarily on live performances.

“Thinking of amphitheaters of like 10,000 people is terrifying. It’s crazy that used to happen. Now we’re just terrified of people, and that’s a topic I want to talk about [in the album],” said Shelton.

We do not know if music will ever be what it once was, in its ‘normal’ state. Local musicians, clearly, have reacted to the past few months in their own ways, but the one common factor is that all hope for a safer, normal-again future wherein human health and music alike can prosper.

This story was originally published on The Statesman on September 15, 2020.