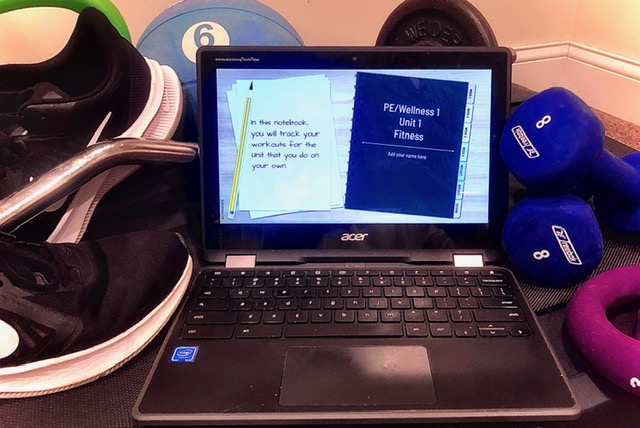 “I was always the type of student that needed to be in class to be able to interact,” physical education department chair Courtney White said. “[As] human beings, that’s what we crave, and to not be in the building and have that social interaction is going to be tough to overcome.”

This school year, remote learning has devastated each academic department. But while some divisions may have endured smaller hardships, others have undergone trickier misfortunes – and as reported by White and other accounts, the physical education department is one of them.

According to White, not only is there less socialization occurring, but his department’s courses are facing troublesome complications because they involve “hands-on” and “lab-based” material. Consequently, many of their curriculums have altered, and teachers have prioritized their students’ physical and emotional well-being.

“We cut a lot of stuff out. We focus on what we truly want kids to learn and [have] added in some social-emotional types of activities we don’t always do in person. The last thing we want to do in our department is [to] load you down with a bunch of work knowing that you also have other work,” White said.
Physical Education Classes
Many things have proven burdensome with teaching P.E. 1 and 2 virtually this fall – both on student and teacher levels. According to P.E. teacher Tonya Giannone, the limited socialization has troubled her and her classes the most.

“The thing I miss the most is having conversations with students when they come into class and when in the middle of activities,” Giannone said. “It’s so different when you’re online with 40 students than in person when you can have an actual conversation.”

While P.E. 1 leader Julia Latocha holds similar thoughts, she believes the most significant struggle among the freshmen she leads is the absence of in-person guidance.

“As freshmen, they may not know what teachers are looking for or even how to complete [certain] tasks. I always see some confused faces on camera. We try to help the best we can, and we usually have one of the leaders demo to show how to do things,” Latocha said.

Despite the several oppressing Remote Learning circumstances, Giannone remains positive, enjoying her physical education classes’ format due to the flexibility that follows.

“It feels like I’m able to teach on a wider range of topics because we will be able to explore different things in the time we have,” Giannone said. “I’m still able to get that full amount of activity in my classes now but teach some of that extra stuff that isn’t necessarily always in our curriculum.”
Fitness Classes
Fitness 2 teacher Joseph Horeni craves the energetic atmosphere and nature of his in-person classes and believes his students are missing out on many course components. According to Horeni, the lack of equipment among some students restricts the course’s activities, many of which incorporate weightlifting.

“[Students] aren’t getting in as many quality lifts,” Horeni said. “Last year we had a female hang clean 165 pounds who probably weighs 125, [and] a 180-pound kid hang clean 315 pounds. A large portion of the grade in the past has been students’ improvement based on a pretest of the major lifts, [but] that’s something we’ve had to take out.”

Early bird fitness student Madeline Antonio feels she isn’t experiencing all she would with her class in an ideal school environment.

“In a typical environment, we’d be doing a lot of team-building activities, but during Remote Learning, we haven’t been able to do them. We [also] don’t get to develop closer relationships as we’d get the chance to do in person,” Antonio said.

But Horeni and his students are finding ways around the challenges of Remote Learning. Those without access to weights and other equipment are generating different alternatives. According to Horeni, water jugs and weighted backpacks have been popular options.

“It’s been fun for me to help students modify and plan for what [resources] they have,” Horeni said. “I’ve been encouraged by the willingness of students who aren’t as fortunate as others who have access to some materials.”
Individual/Dual Sports
Individual/Dual Sports teacher Gabriel Harris praises his students’ cooperation and hard work during remote learning this fall. However, this class, also facing a lack of equipment, has trouble performing many of the activities that they would typically do, according to Harris.

“The reality is [that] without in-person access to proper equipment, I won’t be able to teach skill or technique based stuff hands-on,” Harris said. “It’s not equitable to assume all my students have access to tennis, golf, badminton or [other] class equipment.”

Individual/Dual Sports leader Carissa Blumka, who leads Harris’s class, has been let down by not fully performing and experiencing her role as a P.E. leader this fall.

“Many facets of the P.E. leader role are either not relevant in a remote setting or not possible to execute,” Blumka said. “My strengths as a leader are usually my ability to assess the class situation quickly and make necessary modifications to promote the success of the activity, [along with] elevating the overall level of participation and encouraging others to put in their full effort as well. Both are minimized in the remote setting.”

To keep his students active and in the correct mindset, Harris has them take screenshots of workout evidence, record fitness achievements and reflect on goal setting prompts. But according to Harris, students’ engagement and effort are still hard to measure.

“It’s up to the student to understand the importance of exercise and pushing themselves. I can’t be there to correct technique or make adjustments on the fly as I used to. Students have to follow the rubric individually and intrinsically motivate themselves to challenge themselves,” Harris said.
Team Sports Classes
During remote learning, Advanced Team Sports and Team Sports 1 and 2 aren’t the same. With them excluding many of their typical collaborative group activities, enrolled students aren’t experiencing all they signed up for, according to Advanced Sports teacher Jim Haack.

“I feel bad for the students in my Advanced Team Sports class because some were signing up because of what they have heard and what it is about,” Haack said. “I think it will just be rough for these kids the longer this goes on and how much they will miss the competitive physical aspects that have made this class what it is.”

But Haack remains optimistic for the future and has created a new way to account for his class’s team aspect.  Placed in six-person teams, his students earn points for assignments separate from those for their grades. Individual points students obtain contribute to the “team total” of their team.

“For me, it’s just hard because I know [my students] want to compete. I get that and understand that. I have told them every day that we are truly in this together,” Haack said. “The best part, though, is the students in my class will do a great job as long as this goes on because they are the best.”
A Word of Pride and Primacy
All struggles set aside, White is proud of his department’s hard work and motivation to push through these troublesome times and try to attain a measure of normalcy.

“We’re doing our best. It’s hard to know how to feel when you don’t know what will happen in the future. This is new to us, and our main goal is to make sure that you guys are okay. If you’re okay, then we’ll teach,” White said.

This story was originally published on DGN Omega on September 18, 2020.