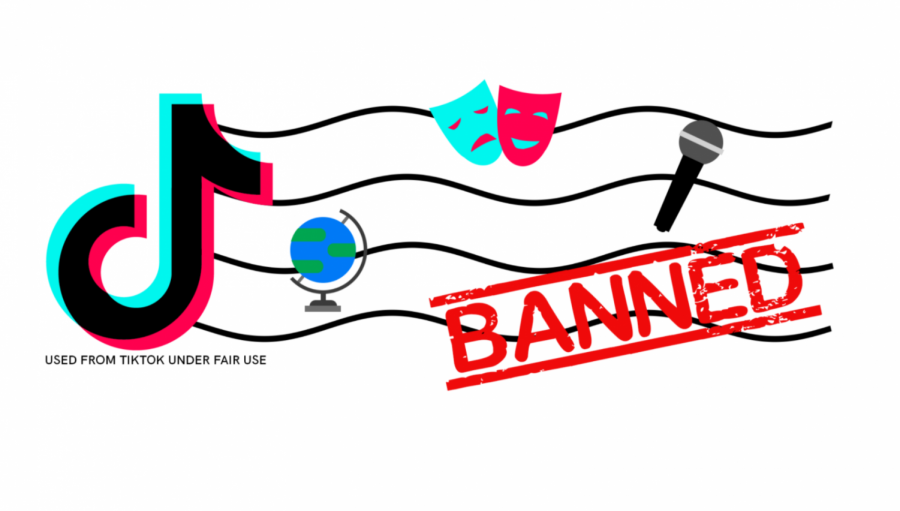 On July 31, President Donald Trump released an executive order to ban the popular social media app TikTok if it was not sold to an American company before Sept. 15, which was later extended to Nov. 12.

As president of the United States, Donald Trump has many responsibilities concerning the well being of the citizens and safety of the country. However, one of the president’s latest concerns has garnered heated attention from the public. Trump is trying to ban a popular social media app, TikTok, by issuing an executive order that could ban the app on the basis of “national security.” Opponents to this order claim that his statements are not backed by enough evidence and that the Trump administration should be concerned about other more important issues, such as the COVID-19 pandemic, U.S. Immigration and Customs Enforcement (ICE) facilities and the Black Lives Matter (BLM) movement, rather than a social media app.

TikTok is an app produced by the Chinese-based company ByteDance. Since its arrival in the U.S., the app has gained massive popularity. Although most people know the platform for its original humor and eye-catching dances, TikTok is also being used as a political battleground for the younger generation. There are various accounts dedicated to posting about politics, which has led to more exposure and discussions about politics among students.

On July 31, the president released an executive order stating that he would put a nationwide ban on TikTok if it was not sold to an American company before Sept. 15. This order has now been extended to Nov. 12. He claims that the app is used to collect and report information on American citizens to the Chinese government. This is a bold claim, which according to research done by Check Point, a Palestinian cybersecurity company, is not supported by enough evidence.

Although Check Point did originally find flaws in TikTok’s user security, TikTok reported that these issues were fixed by Dec. 15, 2019. Check Point then confirmed that all the issues they had previously reported were fixed, meaning TikTok no longer had any large user security issues. TikTok has also stated that the regional managers of their company have control over their respective areas, meaning the regional manager of TikTok USA has more control over TikTok’s operations here in America than China does.

Even if Trump’s claims are true, he should be dealing with more pressing matters, such as the COVID-19 pandemic, the BLM movement and the detention of children in ICE facilities. These issues are more pertinent because they are currently directly affecting the safety and overall well being of the people in the U.S. and should be addressed before the TikTok ban. Yet President Trump has fought harder to prosecute TikTok than taking steps in any direction regarding these pressing issues. He was quick to take action on banning the app under the premise of “national security,” however he has completely ignored national safety when it comes to COVID-19.

The Trump administration has done an inadequate job of addressing the virus in America, as the U.S. leads the world with COVID-19 cases, currently reaching approximately 5.42 million cases. Additionally, Trump has set a bad example for the citizens of the United States by refusing to wear a mask in public and falsely endorsing injecting bleach into the body as a potential COVID-19 cure. These statements, accompanied by the Trump administration’s delayed reaction to the virus, are proving a disastrous combination for the U.S..

“[Trump] can do so much to ban an app, but [he] can’t do as much to protect [his] country from a deadly virus?” junior Alaap Rag said. “I’m shocked. There’s nothing to say. This just shows his lack of leadership ability.”

Besides the COVID-19, Trump has also handled the protests for the BLM movement extremely poorly.

In this horrifying statement, he referred to how he planned to bring in the military if the police could not get the protestors under control. Rather than listening to the protestors, he is allowing the violence to continue by threatening to shoot protestors. Whether he actually meant this seriously is unclear, but even the fact he said it in the first place is completely unreasonable.

Another glaring issue the president has yet to address adequately is ICE’s detention of immigrant children. When families are detained, parents are forced to make the decision whether to remain together with their child in the facility or give their child away in order for their child to have a chance to be released. ICE is separating families and the Trump administration has not made any moves to improve this situation.

Yet none of these issues seems as dire to the president as they do to the rest of the population. The president, instead, has decided to focus on the possibility of lax security surrounding the popular social media platform, TikTok.

When hearing this statement about the supposed relaxed security provided by TikTok, the situation does seem more dire than previously thought. Even if these claims are true; however, Trump still needs to handle the divisive U.S. conflict with China with more tact and precision, rather than making claims that vilify and alienate the Chinese government.

Furthermore, even if this executive order becomes executive action, it is unrealistic for the government to entirely ban the app across the United States, along with its various territories. The app could be removed from various app stores, but it would be an impossible task to remove the app from every device on which it was previously downloaded on. The large tech companies that produce these devices, such as Google, Apple and Samsung, would likely not comply with removing the app from every device in America. There are no U.S. laws that can ban people from accessing these apps, making it a violation to both the citizens’ freedom as well as the ideals that this country was founded on.

TikTok users have already devised ways to bypass the ban, including jailbreaking their phone or using a virtual private network to change their location. Jailbreaking is a function specific to Apple devices, which is used to remove software restrictions on Apple operating systems. For the Trump administration, the only realistic option to completely ban the app would be to make the business environment in the U.S. so hostile that TikTok would not be able to make a profit in America without selling its operations to an American company, such as Microsoft.

While Trump claims banning the app is solely a matter of preserving national security, creators on the app have hypothesized that Trump’s motive for the ban may be personal. Users on the app came together to inflate the attendance rates at previous rallies, such as the one in Tulsa, by purchasing tickets to attend and then not taking part in the rally. This gives Trump yet another reason to ban the app, because his reelection campaign may be disrupted. Another motive that seems to stand behind the TikTok ban would be the president’s agenda for cutting all ties with the Chinese government. The growing popularity of TikTok has made the app a possible competitor against American social media companies, and Trump has expressed previous concern regarding Chinese companies having power in the United States. Appearing tough on China could also help his chances in the upcoming election, due to the history of tensions between the U.S. and China.

Trump taking the app down so quickly also sets a dangerous precedent for government censorship in the U.S. Many TikTok users are left-leaning, giving Trump even more incentive to remove an app that is allowing his opposition to communicate with each other. Banning the app also raises a discussion about whether this action would be an infringement on Americans’ first amendment rights. It could very well be a restriction of free speech if Trump bans the app simply because its users are criticizing him and his actions.

TikTok has had security issues in the past, but it is unclear whether those issues still exist. Instead of concerning himself with banning TikTok, Trump should focus more on immediate domestic issues and work with the Chinese government to resolve their difference instead of antagonizing them. He should focus on the millions dying due to his own poorly coordinated response to the COVID-19. He should focus on the hundreds of families being detained in ICE facilities. He should listen to the thousands of protestors on the street and make America the home everyone thought it was.

But instead, Trump has stubbornly set his eyes on banning an entertainment app designed for young adults.

This story was originally published on The Epic on August 17, 2020.