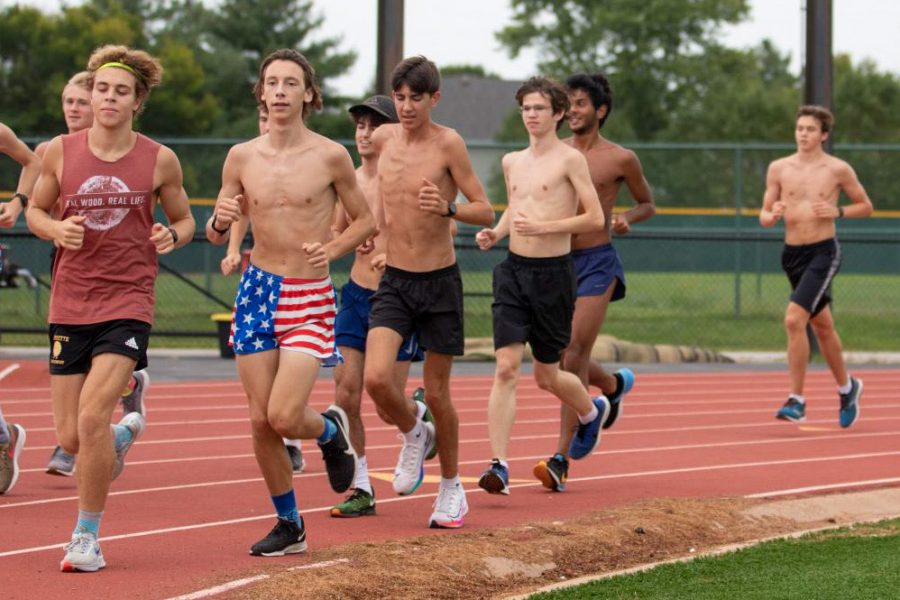 Juniors Sam Aven and Nikolas Malek run in a boys varsity cross country practice. Cross country for both boys and girls, along with boys swimming, girls golf and girls tennis, was recently cleared by St. Louis County to resume play.

“The counties around us [St. Louis County] have been going to school and playing sports and nothing has happened to them, so why can’t we play if they can? That is my main question,” senior cheerleader Maddy Burnet said.

St. Louis County has announced new regulations concerning youth sports. The regulations allow youth sports with players under 14 years of age to start playing games, while still following guidelines from the Centers for Disease Control (CDC).  However, these new guidelines still do not allow for most high school sports to start playing games. The City of St. Louis has even tighter restrictions, not allowing any youth sports to hold games, regardless of age group.

Junior Tommy Hagan plays for the Lafayette varsity football team and has been playing ever since his freshman year. Football is considered a high contact sport by St. Louis County, and therefore, not allowed to play any games or host scrimmages in practices.

“It hurts. A lot. Those nine games mean the world to everyone who plays on the team, and to have it just taken away and see everyone else play hurts,” Hagan said.

Scott Holtmann is an assistant coach for the varsity softball team. Softball is considered a moderate contact sport, players can scrimmage in practice but still cannot participate in any games.

“As a softball coach, it’s disappointing that we still can’t play games, but it’s encouraging that we seem to have gotten a step closer because low-frequency contact sports [for players 14 years of age and under] have been cleared for competition,” Holtmann said.

Sophomore Molly Brim is a member of the Lancer Regiment Marching Band.

“I think the county made the right decision. They just wanted us to be safe, and to be honest, at first I was a little worried about it happening, but now that precautions are in place, I’m better,” Brim said.

The reaction from Lafayette athletes and coaches has been mixed. Senior athletes on sports teams that have not been cleared by St. Louis County are in jeopardy of losing their senior season, which would be their final one.

“I think the county is erring on the side of caution. As far as softball goes, I know I would feel safe if we were allowed to begin competing,” Holtmann said.

“I am a varsity cheerleader, and without games, we don’t have anything left. They have already taken away pep assemblies and other things we usually participate in. If this delay moves fall sports into the spring, I know many of the girls on my team play spring sports, so they may have to end up picking [between cheerleading and their spring sport],” Burnet said.

Lafayette Activities Director Jonathan Sumner has already said, however, that the district has decided not to opt for the alternate fall season that would take place in the spring.

Senior Ava Scaglione, who is a spring sport athlete, attended one of the demonstrations against the county ruling.

“Whatever it is, they’re all emailing him [Rockwood School District Superintendent Mark Miles ], emailing our principals. I don’t think it should be this one guy’s [Page] decision. I think it should be a school choice. Like a district,” Scaglione said.

The St. Louis Sports Medicine COVID-19 Task Force has also disagreed in some part with the county not allowing all sports to move forward and compete, saying in a statement that “we are still not aware of a single case of COVID-19 spread through youth sports.”

The high school sports of cross country, golf, swimming and diving and tennis have been cleared by St. Louis County to start competition.

“Our first race will be this coming Saturday at the Festus Invitational. While there will be some extra precautions put in place such as social distancing; masks for spectators, officials, coaches and athletes who are not actively competing; and restrictions on the number of spectators. Our season is on, at least for now. But otherwise the format for competition looks like it will be largely the same as a normal season. I’m looking forward to it,” Dirnbeck said.

This story was originally published on The Lancer Feed on September 16, 2020.