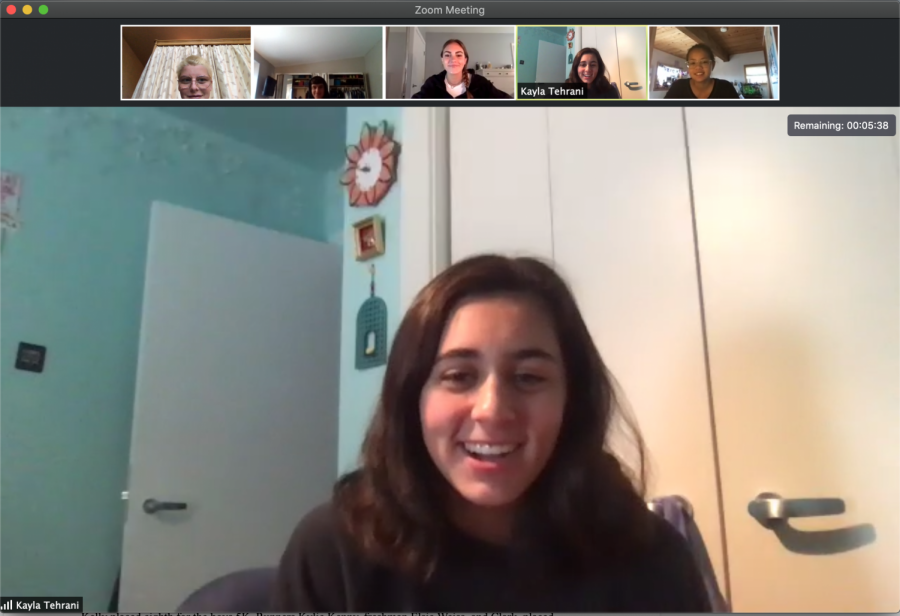 Students acting appropriately while remaining on task in a Zoom breakout room.

During the second week of online learning, Zoom bombing and the use of hate-speech and images in class prompted stricter security measures and guidelines for Zoom calls.

In the preceding weeks, a few AHS students, predominantly underclassmen, decided to air inappropriate and distasteful background images including a swastika and the new white power symbol – in which fingers form a w and a p – changed their names to racial slurs and other profane words, and made racist and derogatory statements in chats. Some of these students joined zoom through secondary, non aspenk12.net affiliated Zoom accounts to present blatantly racist and anti-semetic messages, “anonymously.”

These students may have seen online classes as a means to covertly act unsuitably. Screen recordings and screenshots, however, provided the AHS administration with efficient and accurate records of distracting and derogatory actions, allowing them to identify students and the severity of their misbehavior.

Joey Dziedzic, one of the Spanish teachers at AHS, dealt with a student who logged into one of his Spanish III Zoom calls on two separate logins. This student then flashed a white power symbol on their unidentified account. This student, among others, likely viewed their chauvinistic actions as somewhat harmless antics.

“I don’t think young adults realize how this has some long-term consequences [in terms of] their schooling and letters of recommendation,” Dziezdic said.

AHS vice principal Becky Oliver believes that students are being emboldened by the ability to hide behind a screen, which has increased the amount of racism presented in class.

“We don’t believe the whole school has a systemic racism problem, but we have some students feeding into [racism] in a[n] inappropriate way,” Oliver said.

Oliver, who has a direct role in the discipline of bigoted and disruptive students, prioritizes educating students about the severity and harmfulness of their actions.

Oliver has asked students if they “would stand up in the middle of class and say what it is you are unmuting yourself and shouting or putting in the chatroom?” More often than not, students responded with no.

Josh Berro, one of the AHS guidance counselors, also stresses the importance of empathy.

“Some kids don’t know what it’s like to belong to a minority group or come from a religion or a race that is different from the majority of people where they live,” Berro said.

On an individual level, students will receive a warning for distracting behavior, suspension for derogatory or racist behaviors, and possibly expulsion for a second case of degrading or bigoted conduct.

A new set of guidelines has been set following recent misbehaviors:
Camera’s must be on during online classes, students that fail to comply with this rule may be marked absent (unless there are extenuating circumstances).
In all zoom calls there is now a mandatory waiting room.
In order to login to classes, students must use an authenticated aspenk12.net zoom
Students are no longer allowed to change their names.
Backgrounds must be one of the default zoom backgrounds or a solid color.
If students have a profile photo, it has to be of themselves.
In some classes, chat restrictions have also been implemented.

Sarah Staussburger, the principal of AHS, hopes students are aware that “any derogatory commentary, racial or otherwise, is unbecoming of an AHS student, as well as a violation of the student code of conduct. We will not tolerate behavior that targets or demeans others. We live in troubling times, and I hope that our students can come together to support one another rather than tear each other down.”

This story was originally published on The Skier Scribbler on September 23, 2020.