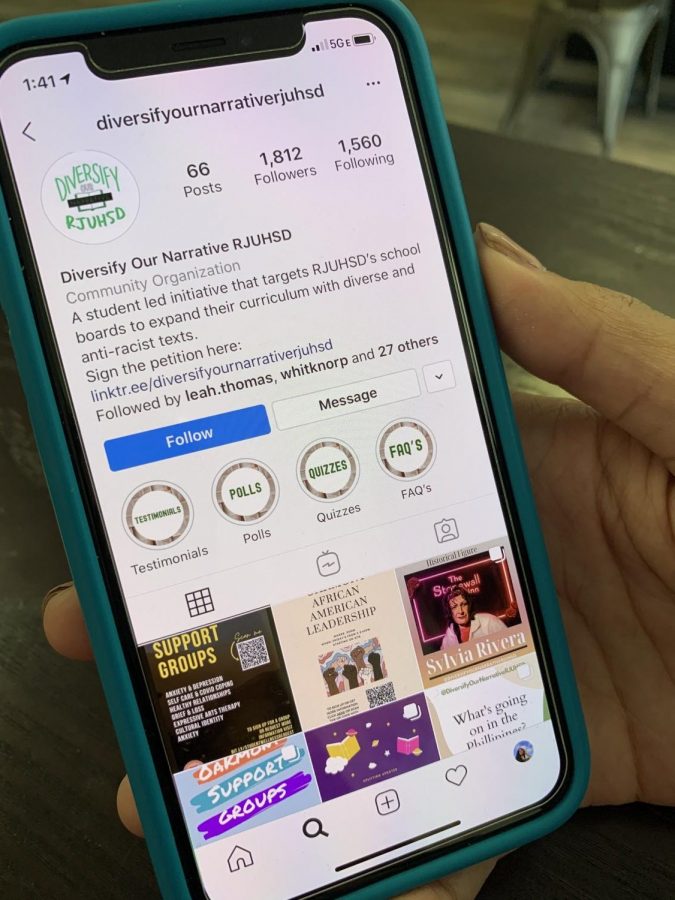 On Instagram, @diversifyournarrativerjuhsd posts infographics, petitions, and testimonials to help educate the community on injustices.

Amidst the “resurfacing” of  racial tensions, many students have begun to express their voice on fragile issues through social media and other activism platforms.

In response to growing tensions, RJUHSD students created the district’s very own chapter in early July that focuses on opening the eyes of students within the district to racial injustices. It appears on Instagram, and provides students with petitions, infographics and testimonials to help them become involved in joining the movement towards equality.

“It is so important that students feel safe on campus and represented in their learning, and that they have a well rounded education that represents the large diversity of experiences that exist in the real world before they step out into it,” said Kaneesha Goyal, a senior at Oakmont High School and lead organizer of Diversify Our Narrative’s RJUHSD chapter. “We need an education that gives students the background learning so they can work to be anti-racist and put an end to the discrimination and harassment we see on our campuses.”

In broader terms, this organization does far more than solely advocate for racial justice, as it also brings light to a whole spectrum of often targeted minorities.

Despite having already passed her high school years, Gonzalez still finds this organization’s mission to be extremely important.

“(Although) I’ve graduated already and it’s been two years, my high school experience is still fairly relevant in how I see certain things today,” Gonzalez said. “I’ve always been a staunch advocate for education in general…and I realized that the quality of education itself can…make a huge difference (in students’ lives). For this reason, I wanted to do what I could to try and make a difference where I had the opportunity to.”

Additionally, Goyal prefaced that, although many of the issues being discussed today seem new, they are deep rooted societal problems.

“There is a lot of momentum right now because of recent events, especially in terms of having these difficult conversations about race with the context of police brutality,” Goyal said, “but at the same time…we want these conversations to keep happening because none of these issues that we are confronting are new.”

One way in which this organization works to combat these pressing issues is through proposing and pushing for an expansion of school curriculums to incorporate more diverse literature as a way to further educate students on systemic racism and inequalities. Their website consists of various resources including recommended school reading lists and sample curriculums.

“I am really glad that (Diversify Our Narrative) is educating people while also trying to get the school board to make the curriculum more inclusive and diverse,” senior Shreya Holikatti said.

Exposure to an array of diverse and anti-racist texts at school can motivate students to carry out their own conversations and thinking, even outside the classroom.

“I think that the curriculum, which is what we’ve been targeting a lot, is a great way to start those conversations that are often very difficult to start otherwise,” Goyal said.

Christy Honeycutt, the English Department Coordinator and AP Literature and Composition teacher at GBHS, similarly expressed the importance of having a myriad of different texts from various backgrounds.

“By studying diverse literature, students are able to learn about cultures, countries, perspectives and ideas that are different to their own,” Honeycutt said. “Often, literature is the first way students may be exposed to differing ideas or beliefs and thus, it’s important to expose students to a variety of literature.”

However, despite its benefits, there are several obstacles that must be faced before a curriculum change is implemented.

“There are…a lot of bureaucratic hoops to jump through when changing a curriculum,” Honeycutt said. “While teachers do have some say in what we teach, there are agreed upon ‘core texts’ that are much harder to change and that have been decided (long ago). (There also) is a large financial undertaking…that we do not enter into lightly.”

Plans to discuss such ways in which RJUHSD schools can diversify the english curriculum are in progress.

“RJUHSD’s English Lead Team, with cross district representation, will be meeting soon to plan ways to integrate more culturally responsive material into our English course, but intends to do so in a way that integrates these new titles with some of our existing curriculum,” said Valarie Buckingham, the District Director of Humanities. “This route allows for a bit more flexibility by school, (and)…is usually less costly.”

Despite financial and logistical encumbrances, teachers work to the best of their ability to create an environment in which all students can learn from different perspectives.

“Our hope is, that by the time you have graduated, you will have experienced literature from multiple views, perspectives, races (and) cultures,” Honeycutt said. The proposed curriculum change will help drive that mission forward.

In addition, the Diversify Our Narrative RJUHSD chapter has many plans they hope to implement in the future and are continually finding new ways to amplify their impact.

“We’ve been setting up student equity teams on every single campus,” Goyal said. “We want these changes to not just be with us and with this group, (but) we want to create systems where these changes keep on happening because these are conversations that need to continue happening, long after this whole movement is over.”

Ultimately, Goyal believes that one of the most important and effective ways in which students can sustain this momentum is by staying active and engaging in difficult conversations.

“(These present issues) are things that we have been reckoning with, and these are issues that are going to continue to persist,” Goyal said, “…unless we decide to take action to combat them. Inaction does nothing but continue to uphold an unjust status quo.”

This story was originally published on GraniteBayToday.org on September 24, 2020.