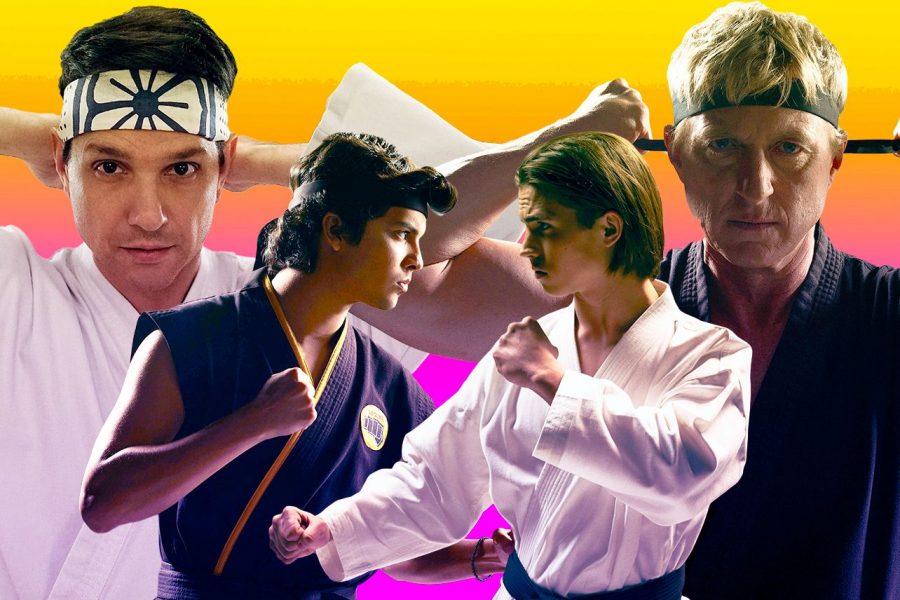 A promotional image from Youtube original series "Cobra Kai," which was re-released on Netflix this month. The show reframes the original "Karate Kid" story, reversing the black-and-white ideals of privilege and morality.

I still remember the first time I saw “The Karate Kid.” I always felt a deep connection to the story and what it said about the true purposes of fighting and ideals of honor. It was the first classic 80s movie I saw, and ignited a passion for the campy comedies of the era. As an Asian/Pacific Islander American, Mr. Miyagi, played by Pat Morita, was one of the first meaningful portrayals of Asian/Islander culture I saw on screen.

No matter how many times I watched the film, one thing was always clear: Mr. Miyagi and his teen student Daniel (Ralph Macchio) were in the right. Their rival dojo, Cobra Kai’s, ideals of “Strike First, Strike Hard, No Mercy” were fundamentally flawed and wrong.

I first watched “Cobra Kai” because of the series’ immediate popularity following its release on Youtube Premium and recent appearance on Netflix. The series follows the original villain of “The Karate Kid” and his plans to reopen the dojo that rivaled Daniel in the first film. I found it subverted the black-and-white binary the movies present, while keeping the same campy, adventurous fun I loved from the original series of movies.

The series opens in the modern day, and focuses on quintessential 80s villain and bully Johnny Lawrence, portrayed by William Zabka. His longtime rival Daniel LaRusso (the protagonist of the original trilogy) runs a high-end auto dealership, while Johnny himself has a blue-collar job and goes home every night to a grimy apartment and a six-pack of Coors.

After saving his teenage neighbor Miguel (Xolo Mariduena) from a bully starkly similar to himself 30 years ago, Johnny makes the decision to reopen the dojo that he trained in, Cobra Kai, to help vulnerable kids like him. As soon as he secures a lease, he paints the three fundamentals of the dojo on the wall: “Strike First. Strike Hard. No Mercy.”

As Miguel and Johnny train together, I found myself connecting more and more with Johnny’s ideals. Miguel’s insistence on “striking first” brings him out of his shell, builds his confidence and eventually lands him a date with Daniel’s daughter, Sam (Mary Mouser). Later, “striking hard” allows Miguel to protect his fellow students and convince his friends to join Cobra Kai. Miguel, a nerdy Latino kid from the wrong side of the tracks, knows that the world shows no mercy. He soon decides he will show no mercy back.

The story also follows the somewhat vanilla plot of Robbie Keene (Tanner Buchanan), a misguided teen who also happens to be Johnny’s estranged son. Daniel takes Robbie under his wing and teaches him Mr. Miyagi’s form of meditative, defense-only karate. As much as I enjoyed Mr. Miyagi’s unorthodox “wax on, wax off” method in the 1984 “Karate Kid,” it paled in comparison to the self-proclaimed “badass” methods of Cobra Kai in this new series. I found myself rolling my eyes when Daniel went on moralistic “inner balance” rants and used training as an excuse to make his students do chores.

However, these plots gave me an intense insight into male relationships and father figures. Daniel and Johnny’s 30-year karate rivalry is always compelling, and their on-again-off-again friendship is almost as dramatic as a teen drama love story. Johnny becomes a father figure to Miguel, while Daniel tries to raise Johnny’s biological son.

The reversal of privilege in this new series is also fascinating. Johnny, once a rich, popular Encino denizen, now lives just blocks away from Daniel’s old apartment in Reseda. His Cobra Kai dojo is filled with “nerds” and “losers,” kids who have been shown no mercy by bullies at school and want to fight back.

This is not to say that the show is a television masterpiece. Unlike the friendships in the series, the romance plots quickly go stale as the series tries to force love triangles and rivalries on its teen characters. The villains outside of Johnny and Daniel’s rivalry bored me. The lines were sometimes so predictable that I found I could finish them despite never seeing the show before. However, this kitschy 80s-style camp is also exactly what makes the show so unequivocally fun.

As a Pacific Islander American, some of Daniel’s practices in “Cobra Kai” also disturbed me. Time and time again, he waters down Mr. Miyagi’s lessons and pieces of his Japanese culture in order to sell cars and karate lessons. Daniel’s appropriation of Japanese culture is mostly made into a joke by the series. This is further exacerbated by the lack of substantive Asian characters and the almost fully white students in Daniel’s Miyagi-Do dojo.

“Cobra Kai” is, as promised, a modern “Karate Kid;” however the story’s’ 30-year maturity has seen it present fresh perspectives on good versus evil and right versus wrong. Previously silent stories become visible in this new narrative, such as Miguel’s immigrant story and the nonexistence of women in either of the dojos in the original movies. “Cobra Kai” will reignite your 80s nostalgia, and have you questioning whether the original tale of privilege and morality was as simple a story as it once seemed.

This story was originally published on The Oracle on September 25, 2020.