A look into Georgia’s history of voter suppression 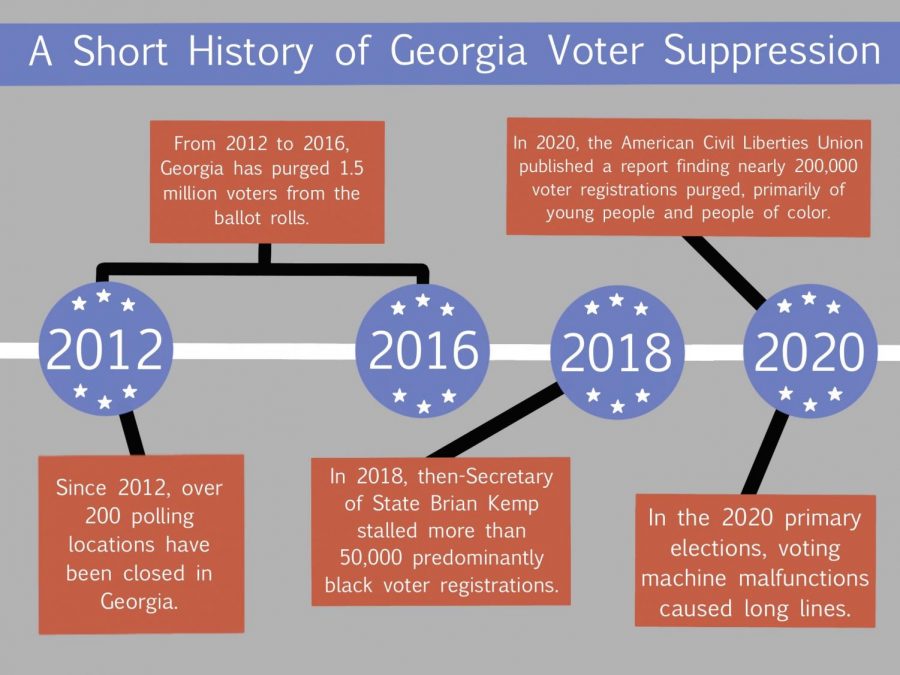 Since the 2018 gubernatorial election all eyes from the nation and from the citizens of Georgia have been glued to the polls and the subsequent election resuts.

While voter suppression is a consistent topic across the United States, no state has seen its dramatic implications and consequences like Georgia.

Since the 2018 Gubernatorial Race between current Governor Brian Kemp and former State Representative Stacey Abrams, Georgia has faced mounting pressure from Capitol Hill and its citizens as voting disparities and having every vote counted continue to grow clearer and clearer.

Georgia has been accused of voter suppression as early as 2012, although its rising concern was popularized by the 2018 election. The Atlanta Journal-Constitution and The New York Times found that since 2012, over 200 polling locations across the state have been closed, amounting to 8 percent of the state’s total polling places.

Following Kemp’s narrow victory by 54,723 votes and allegations of voter suppression directed at Kemp, Georgia residents began to follow elections more closely to make sure their vote was counted. The chaos on Election Day in 2018, and the days following, would not be seen again until the 2020 primaries in June.

The same issues of malfunctioning polling stations and long lines that defined the 2018 election reappeared. Voters across the state saw new voting machines (meant to prevent the fiasco of 2018) missing or malfunctioning. Hours-long lines formed in the midday sun as people attempted to cast their ballots. Absentee ballots didn’t arrive. The primaries only further proved that the 2018 voting system flaws were not a fluke.

Unfortunately, election days aren’t the only days when voter suppression grows and festers. NPR reports that from 2012-2016, 1.5 million voters were purged from rolls in Georgia, a result of the “exact vote” law, passed in 2018. Under this law, the information on new voter registration forms is put in a system that checks the voters’ information against information registered in the Social Security Administration’s database or the state’s Department of Driver Services database.

This “exact match” program has put thousands of Georgia voters in limbo. Those with applications that don’t match are put on a “pending” list. But if voters don’t clear up these issues within 26 months, their applications are rejected. While some claim the law is supposed to protect against voter fraud, critics have determined that applications can be rejected over the most unimportant details, like a missing hyphen.

Recently the ACLU of Georgia published a report recounting the purging of nearly 200,000 voters over seven years. The report found that 198,351 voters were wrongfully flagged as having moved addresses when they did not move at all. The report also concludes that the primary victims of this purging were young people and people of color.

The disenfranchisement of voters and voter suppression in Georgia doesn’t seem to be going away. Again and again, we have seen rampant complications and mishaps with very little explanation. Kemp has consistently denied the allegations, although all the evidence suggests otherwise. This blatant denial of struggles that are so clearly plaguing communities is just another example of the systemic inequalities that invade every sector of America.

Georgia is not the first state to engage in voter suppression, and it won’t be the last. But that shouldn’t stop people from voting. No matter how tedious, how painstaking, how aggravating it might be, go out and vote. To end voter suppression, we must vote for local, state, and federal representatives who will advocate for our vote and our representation. On Nov. 3rd and beyond, we must continue to endure the lines and vote for those who will preserve and strengthen our rights.

This story was originally published on The Southerner on September 24, 2020.