Two teachers, one mission for change 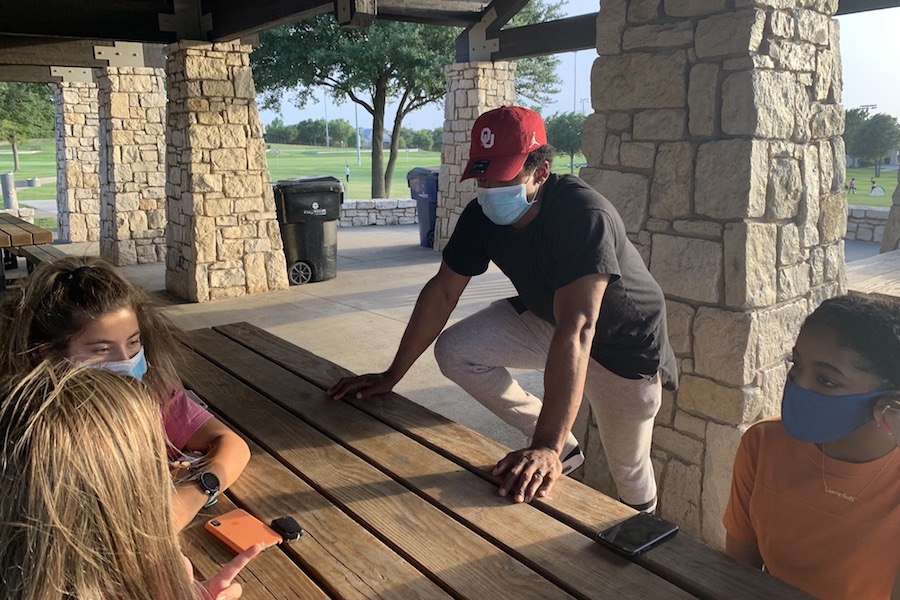 Co-founder of Perspective, Reedy teacher and coach Malcolm Hill talks with students about racial injustice during a discussion event he and Graham put on for community members in July. This event was an extension of their video series, which is arranged as a panel discussion with other educators to discuss various social issues.

Then-kindergartener Malcolm Hill sits with his dad in the bleachers at a Frisco High School football game in 1998. A racial slur is chanted by fans.

“Go c—-s!” Hill remembers being yelled in support of Frisco High. His dad told him they wouldn’t go to Frisco if people continued to support the mascot.

In 2002, Frisco ISD changed the high school’s mascot from one including the slur to “Fightin’ Raccoons.”

Witnessing that change was cool to see, Hill said, as was seeing progress and growth in diversity, however small, within the community year after year.

Hill graduated from Liberty in 2011, and is now a coach and teacher at Reedy High School. He hopes to fight for even more change, joining his Frisco ISD colleague, Wakeland teacher and coach Kevin Graham, in creating a video series on YouTube titled Perspective.

After a summer that brought a greater national acknowledgement for the Black Lives Matter movement following the murders of Ahmaud Arbery, George Floyd, and Breonna Taylor, Hill and Graham sought to contribute to the cause on a local level.

Starting out and continuing to highlight racial injustice, racism and improving race relationships, the goal of Perspective is “to gain understanding by having difficult conversations about serious topics that our society has to deal with.” Each video is arranged as a panel discussion with other educators and then posted onto their YouTube channel.

“The premise behind it is when you hear somebody’s perspective, that helps you understand why they think a certain way or view things a certain way,” Graham said.

Like Hill, Graham is a Frisco ISD class of 2011 alum, graduating from Wakeland. Both of them found themselves having to present the most palatable versions of their Blackness at predominantly white schools.

Graham said for a Black boy to fit in, wearing Hollister and Abercrombie and Fitch was a must, as well as having a two to three story house.

“Being a kid at that time that didn’t come from any of that, I felt like I had to make my adjustments,” he said. “So it was a little bit of a struggle.”

As an educator now, Graham can look back and see how important representation is for high schoolers.

It wasn’t that he couldn’t or wouldn’t talk to non-Black teachers, but Graham said that there was a sense of security in knowing Black teachers have been through some of the hardships he faced as a Black man.

“For Black students to see Black educators is huge,” he said. “It makes them feel like we’re all represented to a certain extent.”

Sully said she was happy to be there for Graham as she knows when kids see teachers that look like them, there’s a feeling of comfort.

Sully was Graham’s last Black teacher until he became one himself.

During Hill’s time as a student at Liberty, he saw a few Black teachers, but the majority were white.

“Don’t get me wrong, the white teachers did a great job,” Hill said. “But when you see someone who looks like you in the classroom, or as a principal, it gives us a different type of hope and willingness and want to learn because they’re in a powerful position, and we want to be in some of those positions too.”

Now providing the representation they wish they had more of as high schoolers, Graham and Hill hope to bridge the gap between various viewpoints and backgrounds through Perspective.

With videos posted about racial injustice and women empowerment, they also plan to host panels that highlight Hispanic, Indian, Middle Eastern, Caribbean, and mutli-racial culture. A video with other coaches talking about the family environment for athletes is also in the works.

“It’s not even a thing of the district or solely for the district, it’s for anybody that’s watching it,” Graham said. “A teenager should be able to find at least one of our videos and find themselves represented by somebody we have on the panel.”

It isn’t just about him and Hill as Black men or educators either, Graham said, as he hopes to be a voice for every student no matter who they are.

Perspective is an outlet in which they hope to tend to such advocacy, and Graham and Hill don’t plan to stray away from having these discussions any time soon.

Hill said as long as he and Graham have their platforms as educators, they will continue to work to spark conversation about issues in the world.

If the conversation stops, Hill said, then it’ll be like every other thing that comes in waves or phases, and according to him, people don’t take phases seriously.

“They will in the moment, but outside the moment, it’s like out of sight, out of mind, and I want to make sure this thing is never out of sight or mind,” Hill said. “You can always look for room to progress and improve on yourself as a human and as an influence of whoever you’re around.”

To watch episodes from Perspective, visit their YouTube channel or watch the first part of their Racial Injustice Discussion episode above.

This story was originally published on Wingspan on October 2, 2020.