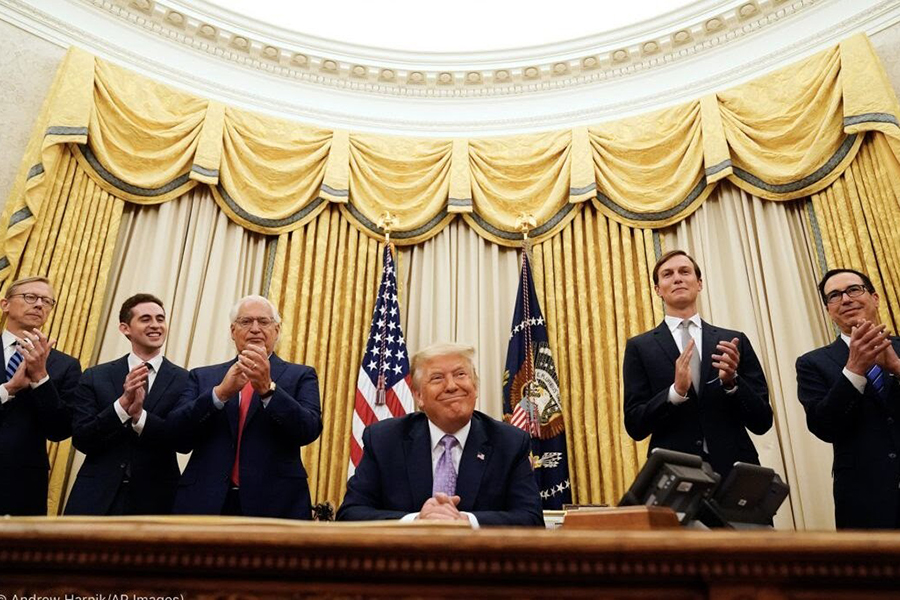 New treaties with the United Arab Emirates (UAE) and Bahrain — only the third and fourth Arab countries to normalize diplomatic relations with Israel in its 72-year history — will be economically beneficial and shift mindsets in the Middle East towards Israel, according to Dr. Hillel Newman, Israel’s consul general in Los Angeles.

Called the Abraham Accords — in honor of Abraham, held as the ancestor of both Jews and Muslims — documents formalizing the treaties were signed at the White House in Washington, D.C., on Sept. 15.

“The first thing is that it’s going to be a warm peace,” Consul-General Newman said in an interview with the Boiling Point.

As part of the treaties, Israel agreed to temporarily retract their plans to annex parts of the West Bank.

According to Dr. Newman, Israel and the UAE have already drafted 170 agreements, some involving science and Covid-19.

Equally important, he said, is that the peace was agreed to for the sake of friendship, not in exchange for land or other concessions — although the agreements were only enacted once Israel agreed to suspend annexation of the West Bank, which was supposed to begin on July 1 of this year.

“It’s the first time it’s a peace for peace, legitimacy given to the state of Israel without any price paid,” said Consul General Newman. “Now we’re coming to a reality where they understand that Israel is an ally and not an enemy, and they understand that they can benefit from Israel.”

The consul general said the new peace agreements changed the nature of Israeli-Arab negotiations by removing resolution of Palestinian claims as a precondition.

“The third aspect” of progress shown by these agreements, he said, “is that they’re turning the tables on the peace process. There was this acceptance that we have to resolve the Palestinian issue first before we normalize relations with the Arab countries. At last this has been broken.”

According to Consul-General Newman, however, both treaties had been in the works for over a decade.

“I have actually had the privilege of partaking in this process,” Dr. Newman said. “I visited UAE one year ago in July 2019 together with our foreign minister, and we visited UAE on an official visit with official meetings. Then it was still kept confidential.”

Though Israel previously has not had diplomatic relations with any Arab countries in the Persian Gulf region, it reached similar agreements with Egypt in 1979 and Jordan in 1994.

According to Consul-General Newman, the vast majority of Israelis support the recent deals — around 90% — and most of the opposition comes from those who believe Palestinians have been unfairly isolated, and on the opposite end, those who do not support the suspension of annexation.

According to Consul-General Newman, the annexation may be temporarily suspended, but Israel will eventually follow through with it, though he did not say when.

“There is an understanding that we suspend our intentions of any extension of sovereignty for a period of time,” Dr. Newman said. “That was agreed upon.”

Max Rabin, who graduated from Shalhevet in 2004 and lives in Jerusalem, said he expects the new agreements to help Israel’s economy.

“I know that economically this is expected to bring a lot of business into Israel, to provide a lot of business opportunities for Israelis outside,” Mr. Rabin said. “The foundation for all economic growth is trade, and Israel only looks westward for trade, [which] limits opportunities, whereas eastward there should be a lot more opportunity, a lot of wealthy countries.”

According to the World Bank, the United Arab Emirates had a gross domestic product of over $422 billion in 2018. While Bahrain is not quite as wealthy as the UAE, its

economy is ranked 23rd largest in the world.

Galya Nisenbaum Aderet, who graduated from Shalhevet in 2009 and lives in Leshem, east of Tel Aviv, said she believed the agreements were a great achievement. But she said she had not seen much reaction from Israelis — partly because of a huge resurgence of Covid in recent weeks.

“Truthfully, for most people it wasn’t the main thing they were paying attention to because of the pandemic,” Ms. Aderet said. “A lot of people were feeling contemptuous that Bibi was able to go to this event in the White House while we’re all in lock-down. People were feeling that that’s a bit ridiculous and unfair.”

Palestinians are mainly opposed to the Abraham Accords. A week before the signing, the Palestinian delegation to the Arab League proposed an official condemnation of the treaties.

It did not pass because Egypt, Sudan, Jordan, and every Gulf nation declined to vote. Because of this, Palestinian Foreign Minister Riyad al-Maliki announced that the Palestinian delegation would be resigning from rotating-presidency of the Council of the Arab League, i24 Israel News reported.

Dr. Sara Deen, president of the South Coast Interfaith Council, said she felt the agreements unfairly left out the Palestinians.

Further, according to Dr. Deen, the decisions of the UAE and Bahrain do not necessarily reflect the views of the Muslim world, even though both are Muslim countries. (She also said her views don’t necessarily represent those of the South Coast Interfaith Council.)

“As a Muslim I feel like it’s important to say, there is no ‘Muslim world,’” said Dr. Deen. “It’s not like one entity or body that has one agenda.

“I often think that this conflict becomes misconstrued or framed as Jews versus Muslims, and that’s just not accurate, because the Muslims are not a monolith group. The UAE making these diplomatic relations, there’s no feeling for me as a Muslim going, ‘Oh ok, we are now engaged with Israel.’ It’s kind of irrelevant.”

As for the move to temporarily suspend annexation, Dr. Deen believes it doesn’t have much significance.

“I think it’s just smoke and mirrors,” she said.

According to media reports, the initial agreement between Israel and the UAE was agreed to during a telephone call among President Trump, Israeli Prime Minister Netanyanu, and the Crown Prince of Abu Dhabi (which is part of the UAE), Sheikh Mohammed bin Zayed bin Sultan Al Nahyan. Bahrain signed on afterwards.

Iran’s military activities have been a longstanding source of worry for its neighbors, as well as for Israel and the United States, who both hope the recent agreements will reduce any threat.

Consul-General Newman said the new agreements signify moderates joining together against radicals in the Middle East.

“UAE and Bahrain are moderates in the Arab world and we can work together,” Consul-General Newman said. “We will stand together and confront Iran, [which is] one of the leaders of the radicals, one of the leading factors in the world today that’s supporting worldwide terrorism.”

According to Consul-General Newman, Israel is also discussing normalizing diplomatic relations with between five and 10 other Arab nations, though he said he could not share the names of those countries.

A few weeks after the peace agreements were finalized, President Trump was nominated for the 2021 Nobel Peace Prize by Christian Tybring-Gjedde, a member of the Norweigian Parliament. Media reports said his nomination letter expressed hope for further peace treaties to follow.

“As it is expected other Middle Eastern countries will follow in the footsteps of the UAE,” Mr. Tybring-Gjeddge wrote in his nomination letter, “this agreement could be a game changer that will turn the Middle East into a region of cooperation and prosperity.”

Opponents of the nomination argue that it is too soon to tell whether the agreements will indeed bring peace.

Within Israel, however, many people are hopeful.

Yoni Bain, who graduated from Shalhevet in 2005 and lives in Jerusalem, Israel, said he believes the peace treaties are a “step in the right direction.”

“People see this as a major win for Israel,” Mr. Bain said. “I think putting us all in the right step to working together for the security of the region, and for the economic benefit for all parties, is really going to help everybody hopefully.”

“The average Israeli is yearning for peace,” Dr. Newman said. “The fact that an Arab state comes forward and says, ‘We recognize Israel, we’re prepared to live in peace with Israel,’ it gives a tremendous moral support to the average Israeli. It’s a dream come true.”

This story was originally published on The Boiling Point on October 5, 2020.