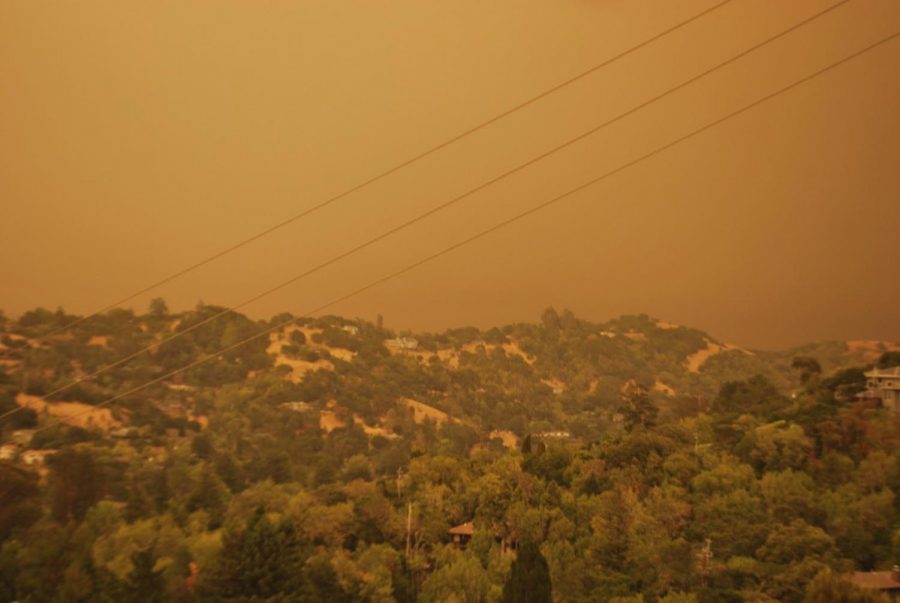 On Sept. 9, at the top of Stuyvesant Drive in Sleepy Hollow, smoke from local wildfires fills the sky.

It’s wildfire season in California, which means months of hazardous air quality, evacuation orders, and new headline-worthy fires flaring up every week. The general population is advised to stay indoors during periods of heavy smoke. But what does this mean for homeless people, many of which spend all of their time outdoors?

“The wildfire smoke has all kinds of particulates in it – not just from wood and forests, but from plastics and building materials and all kinds of nasty chemicals…inhaling that into your body, your nasal passages, your lungs, can cause all kinds of reactions and irritations,” said Interventional Cardiologist and MD Tony DeFrance.

Wildfire smoke inhalation is unhealthy for everyone, but it especially impacts the homeless population because they are constantly exposed to it during fire season.

According to the San Rafael Police Department Mental Health Outreach Liaison, Lynn Murphy, many homeless people have pre-existing health conditions. She says that many of the people that she works with have asthma or Chronic Obstructive Pulmonary Disease.

Having underlying health conditions is extremely common among the homeless population. According to the National Alliance to End Homelessness, homeless people are three to six times more likely to have conditions such as heart disease, diabetes, and HIV/AIDS than the general population.

“If you have underlying medical conditions, or you’re elderly or immuno-suppressed, the toxicity of the smoke is going to have a greater bearing on their health and they’re going to require more medical care…they may go into respiratory distress or be more likely to have cardiac incidents, like cardiac arrest or heart attacks,” said a Southern Marin Fire District Captain, Josh McHugh.

Homeless people who have underlying health conditions and do not have access to shelters during fire season are extremely vulnerable to smoke, as they spend all of their time outdoors when it is considered unsafe to do so. According to the EPA, everyone should avoid outdoor activities and stay inside when the air quality index is between 201 and 300 (on a scale of 0 to 500). Beyond that, an air quality index of 301 or higher is considered hazardous.

But what about homeless people who are exposed to smoke every day just by living outdoors?

According to DeFrance, some short term effects among the homeless population during heavy smoke could be sinus infections, bronchitis, pneumonia, and lung inflammation (pneumonitis).

“Since this is so recent, I don’t know that we can prove that it’s actually increasing heart attacks, but the suspicion is that it likely will. It reduces the body’s ability to get oxygen where it needs to be: to the heart muscle, to the brain, all over the body,” DeFrance said.

According to Murphy, the city of San Rafael opened a clean air site for higher-risk people for four hours on Sept. 12 and 13. St. Vincent de Paul, located in San Rafael, is also open seven days a week to offer food, housing, and crisis assistance for homeless people in need. However, many do not choose to seek these shelters.

The county of Marin also got a large supply of N95 masks and distributed them to non-profit organizations who work directly with homeless people who may need them. Murphy says that there is a resistance to wearing them, however, and that many people just see it as “just one more thing” to deal with.

“People really weren’t all that bothered because everyday life is such a challenge, just meeting your basic needs…clean water, bathroom, food, making sure your property doesn’t get stolen,” Murphy said.

As California’s fire season becomes longer and more destructive each year, people who live on the streets could experience some of the most devastating impacts. Despite Marin County and the city of San Rafael taking action to help the homeless population during the heavy smoke, it ultimately comes down to the homeless people themselves to choose if they would like to receive help.

This story was originally published on Jolly Roger on October 6, 2020.