The trendy spectacle of learning online with blue light glasses 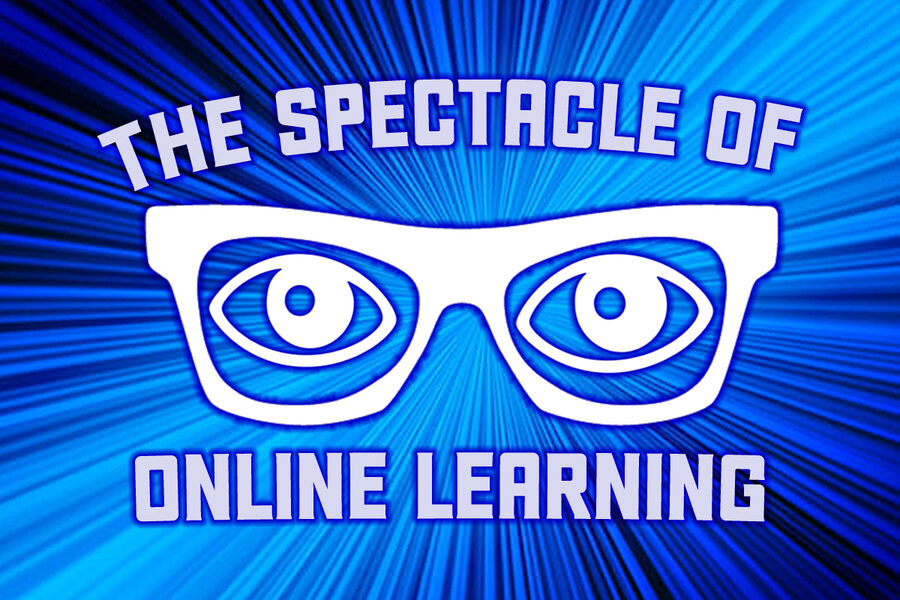 Blue light glasses are the new trend. Do you need them for online learning?

Checking our phones as soon as we get up in the morning is something all are guilty of. Is there anything new on social media? Did my friend text me back about our plans Saturday? With virtual school in session, many are going straight from checking their phones in the morning to opening up their computer screens. What eye damage does all of this screen time do and how can it be avoided?

Blue light glasses protect the eye, specifically the retina, from harmful wavelengths given off by most electronics–the blue part of the light spectrum–short wave lengths with high energy. The retina is the part of the eye that sends this information to the brain through the optic nerve, enabling vision.

Researchers at the University of Toledo (UT) found that body cells, including photo receptor cells in the retina, could be killed by blue light. In comparison, red, yellow, and green light did nothing to these cells. The most significant issue is not that blue light on the screens is very strong–it’s the amount of time we are spending exposed to this light.

Fred Havelock, an optometrist from Reisterstown, has been in the eye care profession for 46 years and recommends a blue light prescription added into some of the eye glasses he prescribes to his patients.

“Blu Block eyeglasses protect the wearer from overexposure to the light wavelengths between 380 and 500 NM,” said Havelock. “Those wavelengths have been found to be harmful to the human eye and are present in all visible light. They are especially present in monitors.”

Have you ever felt like the hours just melt away while working on a digital device for so long? Blue light actually restricts the production of melatonin  that helps us fall asleep.  With blue light exposure keeping us awake, we are more likely to be tired from lack of sleep.

A different Harvard sleep study measured exposure to 6.5 hours of blue light to a similar amount and brightness of green light. Blue light inhibits melatonin production for twice as long as green light exposure. This altered circadian rhythms more — 3 hours for blue light compared to 1.5 hours for green light.
Do I have to get glasses?
Even though optometrists like Havelock recommend investing in some sort of blue light eye  protection, glasses aren’t for everyone. Not all enjoy wearing glasses they don’t need, or they simply just don’t like the way that they look in them.

The stereotype of only geeks and nerds wearing glasses is long-standing. Popular role models who wore glasses such as Steve Urkel from Family Matters and the cartoon Arnold from Hey Arnold both are examples of the negative stereotype.

Senior Dylan Young said, “No way I would ever give them another chance. They would sometimes block my vision with the glaring blue light. They were also somewhat embarrassing to wear because my prescription would reflect that blue light into the room and it would draw unwanted attention to my glasses.”

Google Meetings make glasses more obvious, especially since the camera is only from the shoulders up. Often blue light glasses give a glare and attract attention, which those like Young are not fond of.

Despite the questions about effectiveness, the glasses are “trendy.” Especially with the increase in technology use, many teens are trying out glasses, even if they’ve never needed them before.

There are more and more influencers who style the glasses. Celebrities such as Miley Cyrus, Jennifer Lopez, and Ashley Benson all wear blue light blocking glasses that are slowly changing the nerdy stereotype.

Senior Gabby Krystofiak has never needed prescription glasses before. She recently invested in a pair  because she always thought she would look good in a pair of glasses, and they would benefit her.

“I first got my blue light glasses spring semester of my junior year, right when the Covid-19 pandemic struck. I realized that I was going to be staring at my computer screen for a long time each day,” said Krystofiak.

Krystofiak believes that they work to protect her eyes from blue wave lengths and has experienced the benefits of wearing when she is using a device.

“I personally have liked my blue light glasses because I am no longer getting headaches from looking at my computer screen for a long time. Also by using the blue light glasses, my eyes aren’t as tired and don’t hurt after I have been on my computer all day,” said Krystofiak.
Stylish Specs
Just like prescription glasses, blue light glasses come in different colors, styles, and prices. Most local convenience stores are very likely to have a pair. Walmart sells them for as little as $5.09.

Senior Dante Vettese is a Walmart employee and sees a lot of what goes on the sales floor.

“Walmart has sold blue light glasses for a short period of time, but due to the demand, they are currently out of stock,” said Vettese. “They seem to be all the hype right now, but I find them to be a waste of money since your eye already blocks a wide spectrum of lights.”

They are also at one of Walmart’s competitors, Target, for about $5.99 at their lowest. Since there is a wide range of the quality of glasses with blue light protection, one can basically spend as little or as much as they would like for them. Target also sells pairs of glasses as high as $239.00, but those are glasses that include just about everything from prescription to polarization.

Senior Jordan Webb is an employee at Target and has had parents ask her where little kids blue light glasses would be.

Webb said, “Ever since school started, I’ve seen a lot of parents coming in and buying their kids blue light glasses. Kids are spending so much time on their screens now, and it can be potentially damaging especially for the younger ages.”

The device companies are not unaware of the potential harms of blue light. Electronics have something called a “nightlight mode” which reduces the frequency of the blue wavelengths.

Senior Renata Farrell got blue light glasses a month ago. Farrell said, “I tried using night mode on my computer, but I found that it did not help that much with my headaches from too much screen time. It was just annoying because it messed up the colors on my screens.
The spectacle of working from home
Even though many parts of everyday life are going back to normal, a lot of employees are still working from home. Math teacher Jennifer Purgason and her family are all doing their work from home and are even purchasing more technology to accommodate their busy schedules.

“Going into the new school year I was definitely worried about the amount of screen time we would all experience,” said Jennifer. “I bought huge monitors for my daughters and myself, a new laptop for my husband, an iPad and apple pencil for myself, and for both of my girls, blue light glasses for both my girls and myself, new desk chairs for my girls and floor mats so they don’t ruin the carpet. The desk chairs and the blue light glasses were probably the most important to me. Sitting in front of the computer all day is not good for your body or your eyes.”

Purgason’s daughter Emily is a freshman. She and her middle school-aged sister both work on their school work and participate in Google Meets with their teachers from their rooms while their parents are in other rooms teaching.

10 hours a day and recreation screen time later, on the screen and Emily is just a ninth grader. With all of the benefits associated with even very little blue light protection, giving them a chance, when you are on screens for a long period of time, would be worth it in the long run.

This story was originally published on The Lance on October 6, 2020.