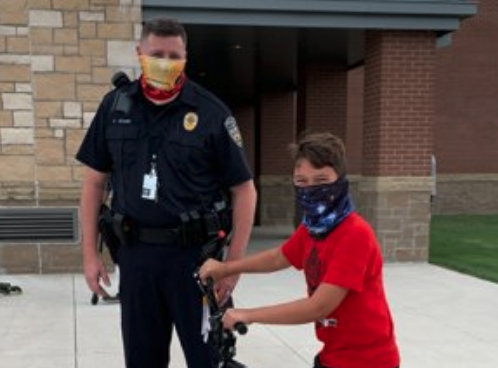 Officer Allen Adams and Lucas Corona are spending time together infront of Furr Elementary School. this photo first appeared on PISD Twitter account on Sep. 16. “Children these days, they need to see some positivity,” Adams said. “We've got so much negative going on in the world that it's just something that our society needs to see these days and see that there is still good in the world.”

Like any other day on the Prosper Independent School District police force, officer Allen Adams patrolled the campus of Furr Elementary School. But on Sept. 14, all seemed well, until a student’s bike was reported missing.

Officer Adams said that before the theft that day, he was working on an efficient route for after-school traffic. The events that would follow may determine the future career of one of the students. During the school day an adult man walked onto the campus of Furr Elementary school and stole 9-year-old Lucas Corona’s bike. The school campus is considered to be a safe place for students and their possessions. But that day while students stayed safe, A child’s bike fell victim to an adult thief who was caught on camera.

“It was shocking to notice that someone would come onto school property like that and take a child’s bike,” Adams said, who found out about the incident after it was reported by Lucas and his father. “It kind of angered me, you know?”

With that voiced determination, Adams said he went to work.

“I immediately went out, started searching the neighborhood to see if we could locate the bike,” Adams said, “maybe sitting in somebody’s driveway, or possibly see the person who had taken it, riding it around the neighborhood.”

Despite his effort, the bike has still not been found.

“The child had saved up his allowance, his birthday money, to buy that bicycle,” Adams said. “He bought it on his own and so when it came up missing, he was disappointed. He questioned ‘why would somebody take my bike?’”

Even though Lucas had his bike stolen, he still wanted to have the well being of others in mind.

“He was pretty disappointed, but then on the following day, we went out and bought another bike and replaced that bike for him.” Adams said. “As of now, his answer is that because he was helped, if his old bike is found, he wants to donate that bike to some other child that may need it.”

The next day, Adams bought Lucas a new bike with money out of his pocket.

“He was extremely happy,” Adams said, “to see that he got a bike back.”

Adams only had one motive as to why he bought Lucas a new bike.

“Children these days, they need to see some positivity,” Adams said. “We’ve got so much negative going on in the world that it’s just something that our society needs to see these days and see that there is still good in the world.”

Adams did mention one of his favorite positives that came out of the entire experience.

“The kid that had his bike stolen,” Adams said, “came to his dad and told his dad that when he gets older, he wants to be a detective.”

On 9/16 at 11:30 AM, the suspect on the left decided to walk onto Furr Elementary and take one of our students bikes.  After hours trying to locate the suspect, Officer Adams took it upon himself to spend his own money to replace the student's bike.  Thank you Officer Adams! pic.twitter.com/XKoWTyw8dz

This story was originally published on Eagle Nation Online on October 7, 2020.