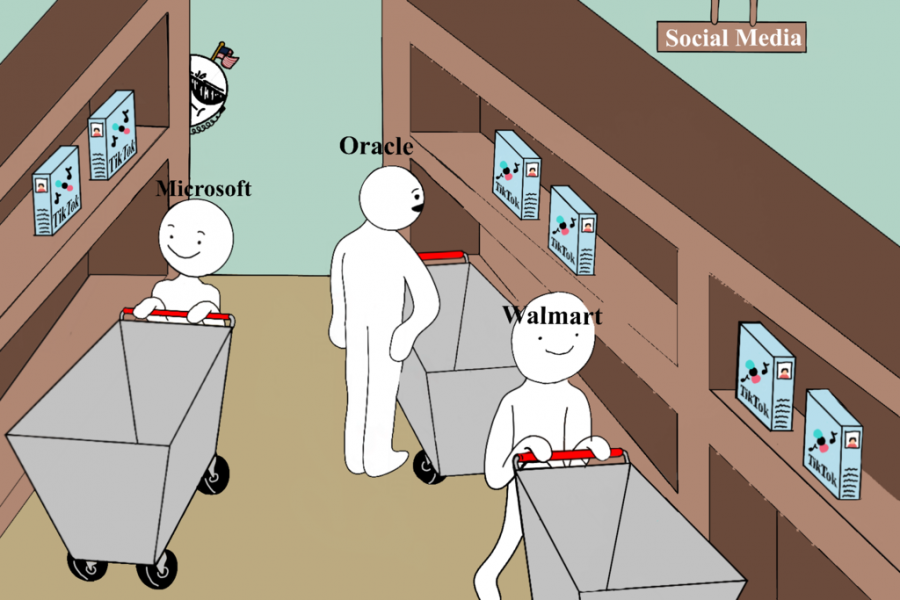 Corporations such as Oracle, Walmart and Microsoft all show interest in purchasing Tiktok, a well-known social media app that creates and shares videos. However, the U.S. government is seeking to ban the popular social media app.

Logging on to the popular social media platform TikTok, viewers are faced by a continuous stream of videos. With comedy, sports, dance and many other video genres, the app has more than 500 million downloads worldwide, of which more than 100 million are from the United States.

However, the company, owned by ByteDance, poses a threat to U.S. security, according to investigations that claim the app gives the Chinese Communist Party access to Americans’ personal and proprietary information. Due to these findings, President Donald Trump will ban TikTok from the U.S. unless further action is taken before Nov. 12.

After President Trump announced the possibility of banning TikTok, a debate sparked on whether this is a breach of the first amendment right to free speech.

“It is legal [to ban TikTok] as there are security concerns from China [such as] stealing [Americans] information,” Coppell High School sophomore Bryan Raitz said. “I’m pretty positive the government knows more [about security threats] than I do. I trust them.”

The TikTok ban could also harm the U.S. economy, as it affects companies’ views on operations in the U.S. Brands and companies may find themselves struggling if TikTok is banned because it could cause a drop in posts on many platforms, impacting their sales and website traffic

“I would want other entrepreneurs to feel like they can enter the market and be successful in the U.S. economy,” CHS social media marketing/Incubator teacher and entrepreneur Brian Simpson said. “If you’re now banning an entity from outside [the United States], where [do we] stop?”

As of Sept. 19, President Trump has approved the concept of a deal which would keep TikTok in the U.S. The deal is between TikTok and Oracle/Walmart, which would form TikTok Global. The new headquarters would be based possibly in Texas.

As a part of this agreement, TikTok will run on the Oracle Cloud and Oracle will become a minority investor, while Walmart will hire around 25,000 people in the United States to run TikTok Global.

Today I talked to @realDonaldTrump about the @tiktok_us deal.

I let him know that if he approves the deal Texas would be the perfect place for the HQ.

“Governor Abbott’s been awesome about bringing jobs [to Texas],” Simpson said. “Toyota, Staples and every company that’s come [to Texas] has really benefited from that.”

With so many companies thriving in the Texas economy, it is possible TikTok could as well.

“Texas is such a big state with a lot [of big corporations]. I think [the deal] would be really good for the Texas economy. TikTok is such a large app with so many creators, [Texas] could probably make a lot of money off of it,” CHS sophomore Farah Kader said.

TikTok’s global business would likely be worth around $50 billion. While operations in the U.S. would be valued less, this offers a large amount of income as well as up to 25,000 jobs in Texas.

This story was originally published on Coppell Student Media on October 7, 2020.