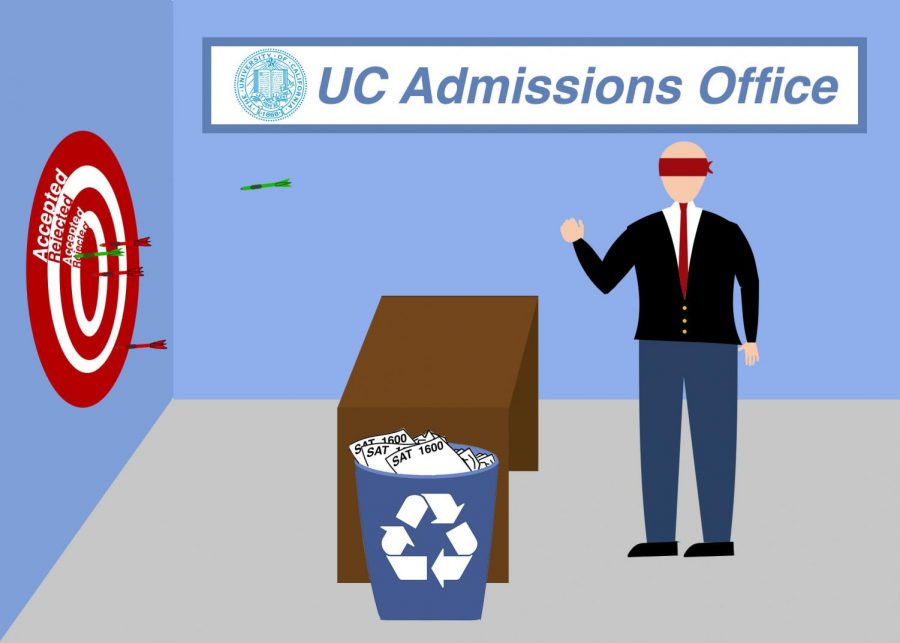 The test-blind policy makes admission officers’ jobs that much harder.

Standardized testing has long been a hallmark of the college admissions process. Regardless of gender, race or ability, most high school students share the experience of preparing for these grueling exams.

However, because of the pandemic, most colleges have opted for a test-optional policy due to the cancellation of testing dates starting in March. Fundamentally, this policy makes sense. Students who haven’t taken the exam won’t be affected in the cycle, but the hard work put in by over 1.5 million students who have taken an exam is not ignored.

This is why it’s surprising that Alameda County judge Brad Seligman ruled that all University of California (UC) schools go completely test-blind for the 2021 admissions cycle. The change is reportedly due to the unfair advantage that normally-abled students have over disabled students in getting test spots during the pandemic.

While this initially seems like a logical decision, the UCs going test-blind for the 2020-2021 admissions cycle is not only unfair to those who invested time and effort in preparing for the test, but also makes admissions exceedingly difficult for students whose grade point averages (GPAs) suffer from grade deflation.

While this reasoning seems sound, there are a number of things wrong with this defense. For starters, although minority groups fare worse in standardized testing, it’s still an important benchmark for overall academic potential. Without the SAT, admissions officers have no way to objectively compare students to each other. The only other numerical comparison they have to go off of is GPA, which not only varies widely between different schools, but also depends on different teachers within the same school. A statistical comparison between students is now akin to throwing darts blindfolded — it just makes the admissions committee’s job that much harder.

Even if the SAT doesn’t currently favor lower-class, disabled students, the UC Regents board unanimously voted to endorse ACA-5, a bill that would reinstate affirmative action in UCs for the first time since 1996. In fact, the UC system was already planning on going test-blind by the year 2025 in order to counteract the harmful effects of standardized testing.

These plans show the UC system is committed to making long-term changes for admissions equity — how anyone could ignore these policies and blindly fault the system for not doing enough is beyond comprehension. Although affirmative action and test-optional admissions certainly do not make a perfect system, the UC system needed a buffer period to phase out the tests in order so as to respect the time and energy of the applicants preparing to take these tests.

The plaintiffs had good intentions when trying to eliminate this buffer zone. It’s true that the College Board has increased its parameters for disabled testing due to the college admissions scandal of 2018, where several individuals used disabled testing accommodations to gain an unfair time extension on the SAT. But when analyzed closely, this policy helps next to no one, especially in the state of California. In a state where most schools have shut their doors since March 13, it’s highly unlikely that many testing centers were open that selectively offered its services to normally-abled students.

“I was gonna take the SAT in March for the first time, but my test was canceled,” senior Pranay Tiru said. “I haven’t been able to find a testing center since.”

As far as the state of California is concerned, the lack of an SAT score on a disabled student’s application is a problem that thousands of other normally-abled students share. Therefore, the basis on which their argument is founded — the elusive second look given to students who submitted an SAT score — is gone when the majority of the state faces the same problem.

It’s also worth noting that admissions officers give second looks all the time for reasons outside of standardized testing. Maybe the student was an excellent swimmer. Or perhaps they won a national competition by taking a test. Or wrote an outstanding personal statement. The list goes on.

There are many extracurricular activities that give students the opportunity to receive a second look; many of these are unattainable for a person with severe disabilities. While this should most certainly change, normally-abled students shouldn’t be punished for excelling at activities they prepared extensively for, such as standardized testing.

Even though the college selection process is deeply flawed and does not favor disabled people in any way, it’s the best the UC system can do for now. Admissions officers are, at the end of the day, human.

Within this quagmire of unpredictability that students face when submitting an application, their standardized test score is one of the only things that can help admissions officers make an objective decision. Removing the standardized testing requirement, a pillar of objectivity in a time of uncertainty, is not only just extremely shortsighted, but also disregards thousands of other applicants’ hard work for the benefit of the few.

This story was originally published on The Epic on October 7, 2020.