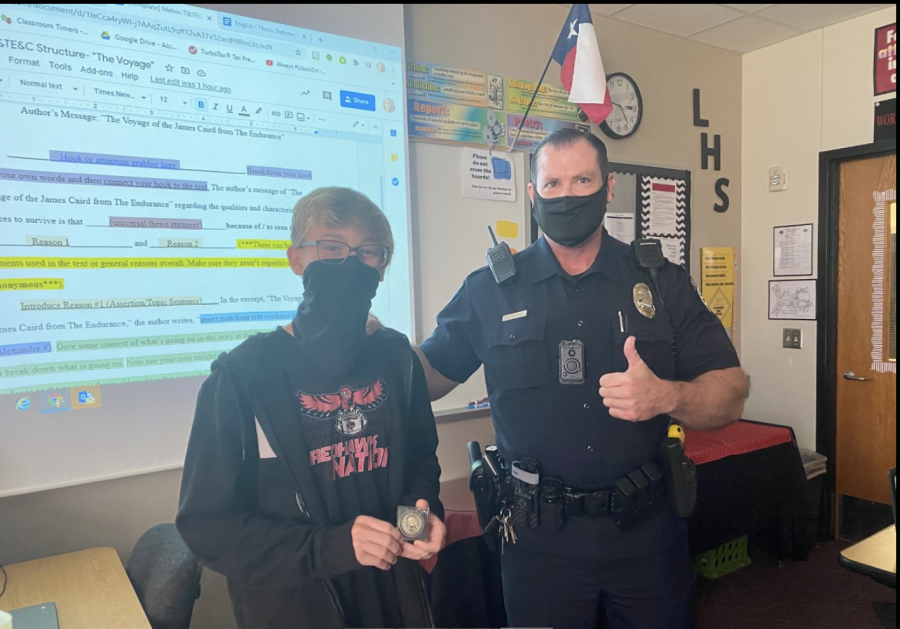 Responding quickly to a classmate undergoing a medical emergency by calling 911, freshman Carsten Swallow was presented with a Frisco PD challenge coin by School Resource Officer Glen Hubbard in recognition of his actions. “I definitely think this will impact me and the way I think," Carsten said. "It really opens your mind to show how much help one person can provide to others.”

September 17 was just another normal day for Carsten as he sat in his 2B class expecting to learn Spanish. That’s when a student had a sudden medical emergency.

“My whole class was in the middle of taking a test and all of a sudden, a kid fell through the plastic screen separating him and another student,” Carsten said via email. “I looked up and noticed a kid having a seizure but froze for a second myself, not realizing what was happening. After a split second of regaining my bearings, I yanked my phone out of my pocket and frantically dialed 911. While on the phone with 911, a girl in my class sitting in the front row began to move everything out of the way and we kept him on his side until the nurse and teachers ran in. We cleared everyone out of the room, sending one person to wait at the front door for the paramedics, but I stayed because I was still talking with the operator and had to answer questions.”

“The irony of the situation is that something similar to this happened with his (Carsten’s) little sister when he was younger,” Carsten’s mom Kara Swallow said via phone call. “That’s the first thing that came to my mind. He was a little boy when it happened, and it’s kind of a traumatic experience.”

In addition to his childhood experiences, Carsten is also training to become an Eagle Scout and was able to apply many valuable skills that he gained from the process in the situation.

“He’s almost an Eagle Scout,” Kara said. “So, there’s a lot of preparation he’s doing and he’s also been taught how to handle such situations. He’s very aware of others. He’s very thoughtful and is quick to help somebody who is struggling; he’s quick to assist without being asked as well. I think that played a lot into why he’s training to be an eagle scout, how preparing to become an eagle scout helped him in this situation, and what values he has that he was able to project that day.”

Even though Carsten reacted timely, it took him a second to comprehend what was happening. He then followed the proper protocol by calling 911 while he directed another student to get a teacher’s help.

“Everything happened very quickly,” Carsten said. “I was a little mind boggled at first in my head, but I kept a calm composure on the outside. The first things that came to my mind were HELP, 911, and seizure. I immediately got up and yelled for someone to go get a coach or teacher. One of the other students in my class snapped out of shock and ran to get help.”

But not only did Carsten know how to respond, his actions encouraged others to respond in the same way.

“Carsten told me that the student was having a seizure and he was the one that said to get a coach so I reacted on it and went across the hall to get Coach Delarios,” sophomore Ethan Ashmore said via email. “It was very scary at the time and my heart was racing. The way Carsten reacted definitely affected how I reacted as he told me to go get help which gave me some confidence and comfort in knowing that somebody knew what to do.”

After informing the operator on the student’s status, Carsten decided to take a step back so that he could process everything that had just happened.

“Once the student had started breathing again, I stepped out into the hallway for a second to take a breather because that really got my heart going fast,” Carsten said.

After help had arrived, he was later awarded a Frisco Police Department challenge coin by School Resource Officer Glen Hubbard for his timely help.

“It’s a metal coin that we give out to honor somebody for doing a good job,” Hubbard said. “I give them to the kids that do something out of the ordinary as a memento from the police department. I went into his classroom and told him that I wanted to recognize him for going above and beyond, for keeping his calm, and for looking out for his fellow students.”

Though it may not seem like much to many, for Kara and Carsten, it could be a lifelong lesson.

“I was really proud of him,” Kara said. “I was really pleased because I think that he’s at that age where kids are very influenced and searching for affirmation. For him to be awarded for doing something good is a really influential thing to be recognized at this age and it really helps others want to do that as well and it motivates him to keep helping others.”

“It’s really humbling to receive a challenge coin, because it just reminds you that you can really make a difference in helping someone else,” Carsten said. “I definitely think this will impact me and the way I think because it really opens your mind to show how much help one person can provide to others.”

This story was originally published on Wingspan on October 7, 2020.