COVID-19 should’ve brought us together 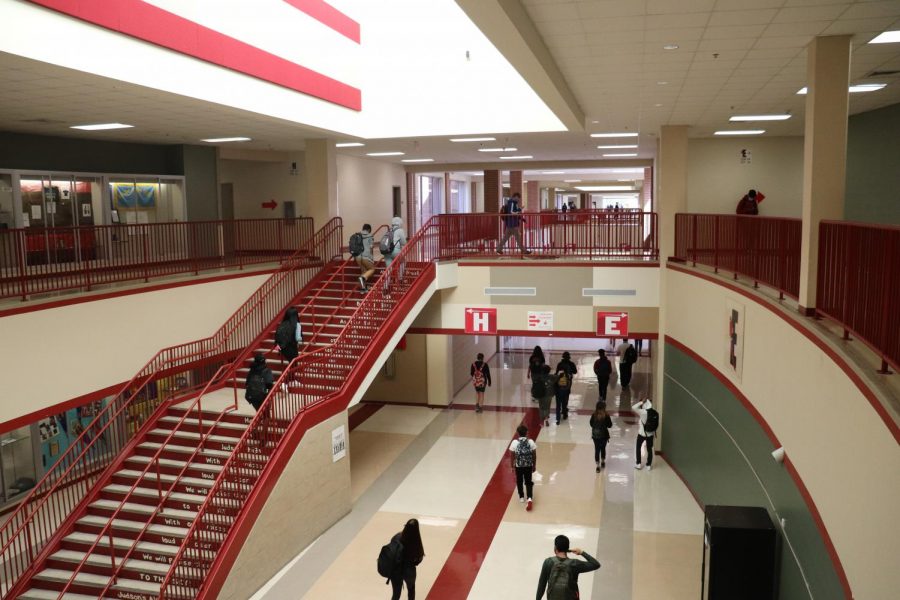 Students change classes between 2nd and 3rd period. With an enrollment of 2700, the vast majority of students have decided to stay online because of COVID-19 fears. Education, like every other industry, has been impacted and politicized because of the pandemic.

On December 7, 1941, Pearl Harbor was attacked by Japanese forces during World War II, resulting in the deaths of just over 2,400 Americans. Following this attack, the United States announced official involvement in the global conflict, as they began drafting soldiers and manufacturing weapons to fight the Axis Powers on the European Front.

Though romances are usually told of the US soldiers battling German forces, it was the events on the homefront that showed the true resolve and togetherness of the American people during a time of conflict. Women entered the manufacturing plants in lieu of the men who were fighting across the Atlantic. Rationing, working, and manufacturing were now the responsibilities of the homefront to support the war effort, and unity was created amongst the people.

On September 11, 2001, the World Trade Centre in New York City and the Pentagon were attacked by a radical Islamic group known as Al-Qaeda. These attacks, resulting in the deaths of thousands, went down in history as, not only a day when American freedom was compromised, but the day a sense of American pride and unity was created.

Regardless of our differences, our political beliefs, or our social standing, Americans have an uncanny ability to unify when faced with a devastating enemy. Al-Qaeda, Germany, the Spanish Flu, and even the British all served as enemies that united the people of the country.

However, in the face of our newest American enemy, COVID-19, we fall short on the virtues we once maintained.

Despite the messages of togetherness that fill the media, actions of togetherness are difficult to pinpoint. Situations where people refuse to wear masks, disregard public safety, scrutinize, penalize, and villainize each other all point to these hope-filled messages being mere platitudes, and not a reflection of the American people’s current mindset.

There is not one sole cause for the change in the ideals and resolve of the people, rather thousands upon thousands of invisible factors that pushed society into a constant state of social war, even in the face of a life-threatening global pandemic. However, there are more than a few possibly notable reasons for the increasingly aggressive state of individuals throughout the country. Perhaps the most devastating of these causes would be mass politicizing of a non-political issue, but a global and national health issue.

It is no secret that America prides itself on being a free country made to accommodate its citizens through democratic elections and personal protections. When establishing a government, one of the most important elements to decide is the ratio between freedom and safety. During this global pandemic, it is clear that the unity of people has been compromised for the sake of freedom, freedom that far exceeds that healthy ratio, and, in turn, drastically compromises safety.

Just like during World War II and 9/11, a conflict has been presented that challenges freedom, but instead of uniting against the enemy of COVID-19, the American people have been divided, fighting instead against each other.

It didn’t just start with COVID-19 though – the divide between people has been growing wider and clearer for decades of America’s history. But it seemingly is only now that a peak has been created and a bigger picture can be seen.

If America was previously unable to unite under any circumstance other than facing an enemy, and we now stand, divided, in the face of an enemy, what future is there for us? If freedom is living in a world without these enemies, without this divide, is the only way to be free to eradicate all opposition?

These questions could be debated for eons by the most qualified scholars on the globe and the answers would still be more or less an enigma. Instead, hope lies within small actions of unity for the sake of peace and personal liberation. Simply doing what’s right for the sake of the safety of yourself and others could be the key to securing a bright and happy future. Perhaps claiming true freedom in the society we’ve built for ourselves is unattainable is a viewpoint far too pessimistic, but claiming everything will be okay if we all work together is far too optimistic if not downright dishonest.

We’ve separated ourselves into factions to the thousandth scale and, realistically, there is no undoing what is done easily or quickly, if at all. One thing is for certain though; small acts of togetherness, accommodation, and understanding can only better this world we’ve made for ourselves. We must take responsibility for what we’ve done and move toward the best possible future, and if it is not done together, it will not be done at all.

This story was originally published on The Fuel on October 12, 2020.