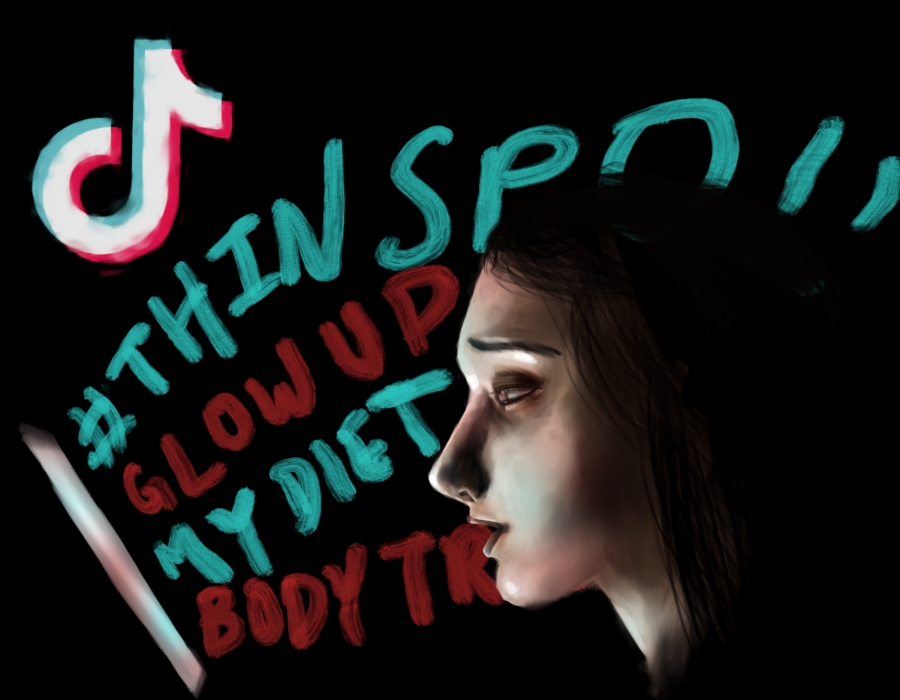 TikTok's huge platform and unhelpful algorithm feeds into the creation of eating disorder related content on the platform.

Struggling with body image issues is nothing new for a lot of people. In a world where appearance influences every aspect of our lives, many of us become hyper-aware of what we look like. With social media use on the rise, body image–centered mental illness has never been more prominent of an issue.

I’ve never come across an app with so much toxicity, which is a high bar to meet. I’ve witnessed some form of body-shaming or unrealistic beauty standards on nearly every social media app, but what makes TikTok so different?

Its “For You” page.  Much of the app’s videos have been progressively pushing harmful eating disorder-related content as the latest “trend,” and has been noticed by nearly every single girl I’ve talked to. I’m sure it’s an issue for male users as well.

While there’s always the chance it can be genetic, eating disorders are primarily learned behaviors. It is human nature to eat. People wouldn’t put themselves in this situation naturally if not learned from other people, thus, the harm of normalizing the behavior. Due to TikTok’s algorithm, there seems to be an endless amount of eating disorder-related content, furthering the spread of the detrimental mindset.

The way a user’s feed works on TikTok is slightly different than apps like Instagram and Twitter: On other platforms, your feed will only show the posts of those that you follow. The For You page, on the other hand, uses an algorithm that takes into account the amount of time spent on each post, the ones you like, the ones you save — pretty much any and all of your activity.

This means that anyone can see any video on their For You Page, whether they want it or not. While it’s helpful in terms of feeding you content you enjoy, when it becomes harmful content, there’s no effective way to block it from continuously coming up. With this algorithm, patterns of disordered eating have been trending lately, flooding people’s For You pages. And that’s absolutely disgusting.

This initially started with weight-loss content, and it didn’t seem to have malicious intent.

Just about seven months ago, when quarantine began, weight-loss-related videos were popping up everywhere. This was not only to keep people active when stuck at home but because many wanted to “glow up,” or completely change their appearance with the new time on their hands. From workout routines to “What I eat in a day” videos — there was no escaping it.

Chloe Ting, for example, is a YouTuber who offers free workout programs. Much of her content gained popularity through TikTok, with special attention toward her “25-day hourglass” challenge. Whether the TikToks were jokes of the cringey background music or showing results each day, it seemed to be an expectation that every girl would be using quarantine to “improve” her body’s figure.

I can’t lie: I, too, was putting in extra effort, hoping for a body transformation. For the record, the 25-day programs are not going to give everyone the same results, as I found from personal experience. While I was already quite the active athlete, I had been sucked into the idea that it was now one of my biggest responsibilities to shred off any excess stomach fat, while making sure not to lose the curves that apparently define me as a woman.

Reflecting back on it, I now realize that users as young as 10 years old are being told that their bodies aren’t good enough. When I was in elementary school, barely any of us even had social media, but looking at TikTok’s demographics, it’s evident how times have changed. However, this content has not taken into account it’s potential young audience.

These workout trends aren’t even the issue. Having motivational videos to stay active and keep a balanced routine is not problematic by itself.

The real problem began when people started to turn harmless content into motivation toward disordered eating. I would look at the top comments on any thin creator’s video to see, “I wasn’t planning on eating anyway” or “Okay, I’ll put the chips down.”

Not only are these comments entirely unnecessary, but they imply that if someone else appears to be thinner than them, they should stop eating — an idea that is unquestionably triggering.

As quarantine drew on, TikTok content progressively became obsessed with physical appearance, creating a pattern for other users to take in and mirror.

This “diet culture” turned into something much more dangerous. Truthfully, it’s become an eating disorder culture.

Videos started to pop up, displaying content from unhealthy diets to people claiming that heartbreak is the best way to lose weight. The content was just everywhere, subconsciously planting seeds in young viewers’ minds that losing weight should be their ultimate goal.

On TikTok, where trends can so easily blow up, my For You page was flooded with videos of malnourishment, giving me the idea that every other person had an eating disorder when in reality, it was the disproportionate content TikTok was feeding many of its users. But, the more the content is viewed, the more it becomes a reality. Eating disorders are being normalized, in fact, romanticized.

Creators sharing their experiences of suffering from eating disorders would do so by simply showing before and after pictures, essentially broadcasting the visible weight they lost. When excluding any and all of the negative aspects of such disorders, viewers often perceive it as a whole lot more glamorous than the reality. Instead, it comes across as nothing more than an effective way to lose weight, which is extremely damaging content.

So then began the wave to “stop romanticizing eating disorders,” and although it definitely has good intentions, it’s oftentimes just as triggering. The videos displaying negative aspects of such disorders such as the hair loss or the constant chills continue the spread of content and triggers the competitive nature of eating disorders. When the negative side effects of the disorder are publicized, others struggling will often use this to gauge whether or not they’re doing enough, and can push them further if they don’t see those side effects in themselves. Blatantly put by Emma Whidborne, a writer who struggled from anorexia, “It wasn’t just a competition with myself to reach my lowest weight, which many may think; it was a competition with other people with eating disorders to beat their lowest weight and be the ‘best anorexic.’”

Written in The National Center for Biotechnology Information by Ph.D. Wade Berrettini, “The eating disorders anorexia nervosa and bulimia nervosa traditionally have been viewed as sociocultural in origin,” meaning that someone struggling with their eating habits does so primarily because they compare themselves to others, or due to social interactions in general, hence the need to limit this exposure through TikTok.

But these videos still fall under general TikTok trends. It goes beyond the videos when there are explicit pro-ana (pro-anorexia) and thinspo (thin inspiration) hashtags, travelling into the realm of dance and vlogging TikTok.

Pro-ana is intended to be “motivation” of sorts to continue triggering people into anorexia. Using images of specific body types, underweight scale numbers or meal plans dangerously low in calories, it is intentionally harmful content from others struggling themselves, who’s hashtags make the For You page too often.

While many social media websites, including TikTok, work to block this content, these trending hashtags, often with misspellings to avoid a shadow ban, still have thousands of videos under them. Without the feature to be able to block a hashtag, the terrible content continues to spread.

One viral account consists of content from someone in an actual eating disorder recovery center. The girl, probably about my age, who required medical help to start recovery, consistently posts videos of her body checking, excessively monitoring her body’s physical appearance. Although she’s supposedly in a stage of recovery, her content has not been beneficial in empowering that of others. As someone struggling herself, she should understand how her videos can impact those watching. And when her specific intent is to act as “thinspo” (a comment she actually liked), there is no other way to perceive this content as anything other than harmful. Both for her and her viewers.

The never-ending trends are reaching so many people of such young ages and instilling these mindsets they might’ve never come across otherwise.

This content probably won’t stop being made all together. But when it can just show up on your feed, and you watch the video one too many times by reading the comments, boom, you’ll get three more videos on the same topic tomorrow. It’s a difficult cycle to break out of, and a harmful one.

This story was originally published on The Talon on October 13, 2020.