The retirement of the PV Indian

The push to change the mascots 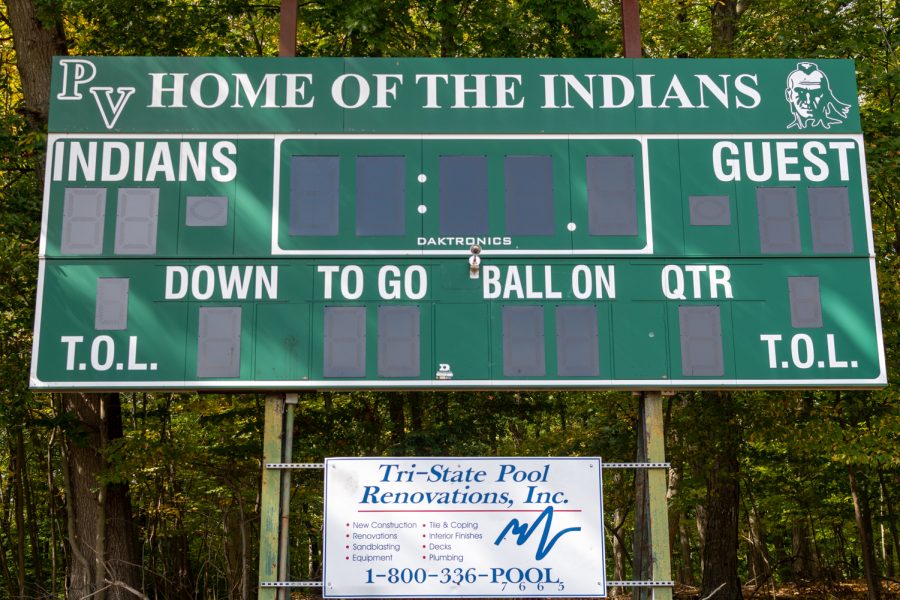 Discussion surrounding the PV Indian mascot has "been going on for years," according to district Superintendent Erik Gundersen. Several clubs and community members spoke out in favor of removing it in the months leading up to June's Board of Education meeting.

By Ellie Kim and Abby Shapiro

The Board of Education meeting on June 22, lasted for two hours and 30 minutes. The Board discussed and approved the retirement of the Indians and Cowboys mascots near the end of the meeting. The topic “Discussion of School Mascots” was put under Old Business on the regular meeting agenda, which was available to the public on the district’s website prior to the meeting.

During the comments from the public section at the Board meeting, over 50 community members, including parents, PV graduates, and current students, commented on the mascot’s retirement.

After two hours of discussion, BOE member Arnold Scher motioned to remove both mascots during the policies portion of the meeting.

“Perhaps once upon a time there was a sense of rivalry between the two schools, but we don’t foster that kind of environment anymore so we shouldn’t have nicknames that [conflict with] each other,” BOE member Kenneth Ralph said before the motion to remove the mascots was put to a vote.

The motion passed by a unanimous 9-0 vote.
The lead-up
Although there has been conversation about the mascot in the past, it wasn’t at the “forefront of the work that the district was doing” at the time, district Superintendent Erik Gundersen said in a September interview with the PV Student Publication. Recently, the district had been focusing on its goal of equity and inclusivity.

President Tammy Molinelli, who was interviewed in July, is the only member on the Board who is allowed to comment to the press. Regular Board members can not make comments to the press outside of official meetings.

“If inclusion and diversity embraces everyone as being unique, having mascots that compete with each other is a little counterintuitive,” Molinelli said.

Molinelli said that the decision to remove the mascot was based on facts. She said that “experts and past students helped them to understand the harm that this mascot was doing to individuals.”

“The Board’s only job is to look at policy. We’re not political. We don’t do things personally,” Molinelli said. “We just simply look at factual information. And we ask the singular question: What is in the best interest of students today and students in the future?”

Discussion of the PV Indian mascot arose during a BOE meeting April 27. Although the focus of the meeting was primarily to address concerns about a graduation ceremony, several parents and students spoke in favor of removing the mascot. This came in the wake of a t-shirt created by a PV parent, which displayed the Indian logo wearing a mask. The t-shirt was not endorsed by the district.

“We have not been approving any apparel with the Indian head logo on it for quite some time,” Gundersen said at the April 27 meeting. “I can understand why [the t-shirt is] offensive.”
The push to retire the mascot
The decision to retire the two mascots on June 22 came on the heels of two ad hoc meetings between members of the Board and the PV One Spirit and Human Rights League clubs, district Superintendent Erik Gundersen said. The Board occasionally creates ad hoc (temporary) committees to address certain topics, according to Gundersen. A committee can not have more than four Board members present at a time, or else the meeting becomes official and must be advertised and open to the public.

Several community members, including ones from the PV One Spirit Club and the Human Rights League, have advocated for the removal of the Indian head mascot. The One Spirit club believes that it has a “responsibility as Americans and students themselves and others about Native American culture and values,” according to its website. Students who are part of the Human Rights League discuss, educate, and advocate for human rights. In the past the group has proposed adding education about the Indian mascot to the school curriculum.

Rachel Cohen and Olivia Jones, last year’s One Spirit presidents, formed a committee of students to help them advocate for the removal of the Indian mascot. The group was composed of current One Spirit presidents Paige Gorman, Sarah Tamagny, and Lucy Disalvo, as well as Human Rights League member Skylar Fay.

“Leading up to the decision [to remove the mascots], we started a Twitter campaign. Our biggest goal wasn’t to try to argue with people, it was more to educate — we wanted people to understand why we feel the way that we do,” Jones said.

The group gave a presentation to members of the BOE in two separate ad hoc meetings. They voiced their concerns about the mascot’s effects on the school’s environment.

“We have a mascot that has been proven to lower the self esteem of American children and adults,” Gorman said. “I think it’s a bizarre concept to have a minority, especially a minority in which a genocide was committed against, as a mascot.”

The sessions were not official Board meetings, since only half of the members were present at a time. The presentations took place at the end of the school year in the two weeks leading up to the June 22 Board meeting.

“Everything [official is] done publicly, there’s not a single thing that is done by the Board of Education that is not public and is not meant for public record,” Molinelli said.

Molinelli said private personnel matters and staff issues are the only topics discussed during closed sessions. Otherwise, the topic is discussed in a public setting. Additionally, Molinelli said the Board is not required to “stick to a very strategic specific agenda” during meetings. All community members are allowed to attend meetings and speak during the public comments portion.

“The Board didn’t go out shopping for a controversial issue to drop into the community for the sake of doing [so],” Molinelli said. “It really was an organic policy decision we made based on a very large amount of people coming to us expressing extreme distress over not only the logos individually, but the fact that there was a rivalry [with] the Cowboys and Indians between the two schools.”

This story was originally published on The Smoke Signal on October 23, 2020.