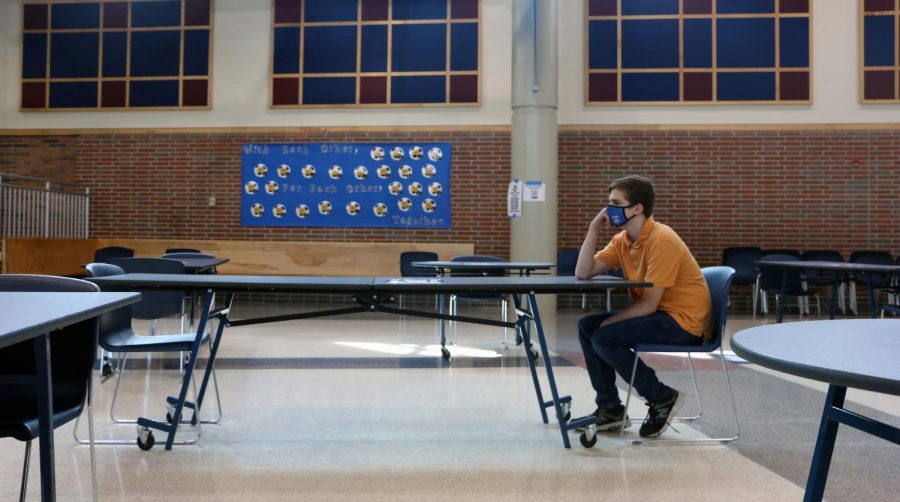 Freshman Joseph Sandy sits in the Freshman Cafeteria by himself. “I expected negativity, but instead I got positivity,” Sandy said.

It’s hot in the classroom. Junior Emily Long lowers her mask to take a sip of water. A classmate jokingly quips, “Don’t pull down your mask,” and Long is reminded of the fact that she is a COVID-19 survivor in a school where many people are scared of getting infected.

It’s a stigma of which Long said she’s fully aware.

Long said she doesn’t share this information as much for the fear of stigma and the fact that she doesn’t want to be labeled in her junior year.

“I don’t want to be looked at differently, especially at the beginning of the year. I’m trying to make all these friends with my new classmates, not (to be known as) the girl who had (the) corona(virus),” she said.

When Long said she did tell people about her experience with COVID-19, she was met with questions like, “Are you still contagious?” or “Were you really sick?” which she said made her uncomfortable.

She also said she received some hate messages on her content online. She said a Snapchat picture of Long and her friend in a dance studio without masks received passive-aggressive comments such as, “Thank you for spreading corona,” and, “You’re contributing to the deaths in the world.”

“People just automatically jump to conclusions  now about it, and they don’t understand what’s happening behind the scenes,” she said. “That was just upsetting, a little bit, but I just ignore it.”

Long said she and her friend have also received threatening messages, and Long claimed her friend even received a death threat. Although it’s not outwardly obvious, Long said invasive questions and some student reactions made her self-conscious about sharing her experience of having had COVID-19.

But while Long’s experiences with outsiders were difficult, the experience of freshman Joseph Sandy was different. Sandy was quarantined for two weeks after his sister was diagnosed with COVID-19 and returned to school on Sept. 1.

“I expected negativity, but instead I got positivity,” Sandy said.

He said he didn’t receive any kind of bullying or stigma for having had COVID-19 and said he had an amazing support system to help him get through this tough time.

“I always thought that people would not go anywhere near (people who have had COVID-19), but it turns out people help them more instead,” he said. “This whole pandemic has really brought out the good in people.”

Stigma is not the only issue that COVID-19 survivors face. According to IB Psychology teacher Peter O’Hara, there are several short-term psychological effects of having had COVID-19, such as anxiety and depression. O’Hara said the virus was hard on students who were social and forced to quarantine.

“Humans are naturally social animals. There are a lot of high anxiety levels right now, based on the fact that we are not around other people, there’s so much we don’t know about the virus, there’s so much we’re unsure of, and all of that could cause various forms of anxiety, etc.,” O’Hara said. He also said the difference in psychological effects between adults and students was based on perspective.

He also said while he hasn’t seen any outward stigma or bullying against students who have had COVID-19 at this school, he encouraged anyone getting bullied for any reason to report it immediately. O’Hara said the fear of not knowing what the virus could do made people extra cautious, and situations of this kind often lead to mass hysteria.

“False accusations, false information, false definitions, all of these could lead to hysteria. Hysteria is the fear of the unknown,” O’Hara said. “A lot of people having issues with this virus (are having them) because they don’t know.”

During this time of uncertainty and limited knowledge, Long suggested students get their information from a reliable resource, be aware of what they see and post on social media and just be respectful of boundaries with anyone who had COVID-19.

“I know it’s just something that happens naturally, but maybe just think before you speak about it. It’s uncomfortable to talk about, and try to explain ourselves and literally debate with you if I’m healthy or not,” Long said. “We’re all in this together, and there’s no reason to bring us apart.”

This story was originally published on HiLite on September 24, 2020.