Exploring what it means to express oneself

Every year on Oct. 11, National Coming Out Day is celebrated to raise awareness for individuals within the LGBTQ+ community. On this day, many people who identify as queer choose to come out. According to The Trevor Project, coming out is when someone reveals an important part of them self with another person, which can involve sharing their sexual orientation and/or gender identity. The Trevor Project adds that coming out isn’t always easy.

Such was the case for sophomore Brooke Frei, who identifies as a trans woman and a lesbian. Because of her anxiety, she found it easier to come out to her parents by sending them a text message with all the details she wanted them to know, such as that she identified as a girl, her pronouns were she/her and her name was Brooke.

After receiving the text, her parents called her downstairs and asked her questions, such as questions about how they were going to proceed with transitioning or how to make Frei more comfortable. Some of the questions were slightly uncomfortable, but she didn’t mind them; she believes it is better to get awkward questions answered by an actual trans person, rather than an internet stranger.

*For the purpose of maintaining their anonymity, we will refer to this student as A.

Similarly, A, who identifies as bisexual, experienced a lot of anxiety and frustration during the process of coming out. However, she doesn’t regret coming out because she was able to become more honest with herself.

“I’ve just gotten better at accepting my feelings and … acknowledging how I feel in any aspect, whether I’m stressed out on homework or mad at someone,” A said. “I’m better at telling myself that it’s OK to not be like everyone else even though it might feel weird. That’s how I am and I can’t change it.” 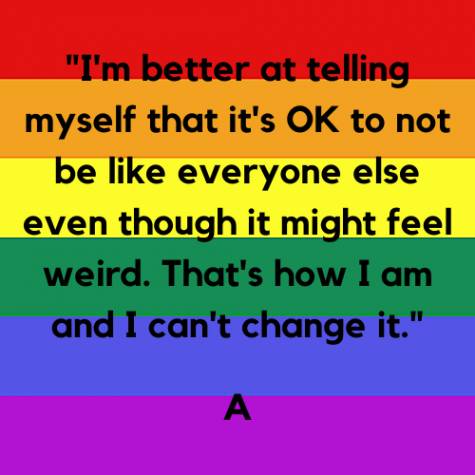 Additionally, coming out helped A narrow down her friend group to those who respect her depending on her friends’ level of acceptance. Frei also found that coming out has positively impacted her because it became a lot easier for her to feel and be seen as feminine.

“Over time, that’s definitely helped me be … more comfortable with dealing with dysphoria, including body dysphoria and social dysphoria,” Frei said. “Being able to act more feminine has helped [my] general self esteem, not even with my body necessarily. Just having people be aware that I identify as a girl has helped me feel more comfortable, even [when I am] presenting masculine.”

Although A thinks coming out has helped her, she believes many people treat the process as a big deal and wishes this weren’t the case.

“I think the only thing it is is just letting people know one more thing about yourself,” A said. “No matter who you are, it’s not like your life has changed because you’re one gender or another. I hope that it’ll become something … small, because it is. Because it doesn’t change anything. It’s just letting someone know another part of yourself.”

English teacher Mark Carpenter, who identifies as queer, also hopes that people won’t place such large emphasis on labels, such as pronouns. He acknowledges that some people are attached to their pronouns and have had to fight hard for theirs, but personally he is ambivalent about them.

“With most questions in life, I try to come from an anarchist position and say, ‘Does imposing this system, does imposing this order do anyone any benefit?’” Carpenter said. “And I don’t really feel much benefit from gendered pronouns. That being said, I also don’t feel much harm personally from them, so I’m open to any and all.” 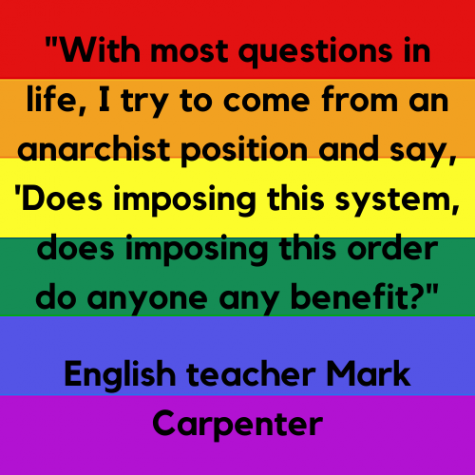 Carpenter also hopes people won’t feel obligated to come out. He understands that some people figure out something about themselves and want the world to know, and he applauds that. But he doesn’t think people have to do so, or be held accountable to what they said as if it were a life declaration. Despite this, Frei notes that some people feel especially pressured to come out on National Coming Out Day.

A echoes the sentiment. She came out because she wanted to be open with her friends, and encourages coming out if one feels safe doing so. She believes the timing depends on each person, and no one should feel obligated to do it if they don’t feel like it yet.

“I think it’s easy to just succumb to the pressure of other people because it [seems] like an obligation that you should do it,” A said. “But no one should tell you when you should do anything, if you’re not ready, because at the end of the day it’s about you and your safety.”

This story was originally published on El Estoque on October 11, 2020.