8 months later and the championship memory lives on 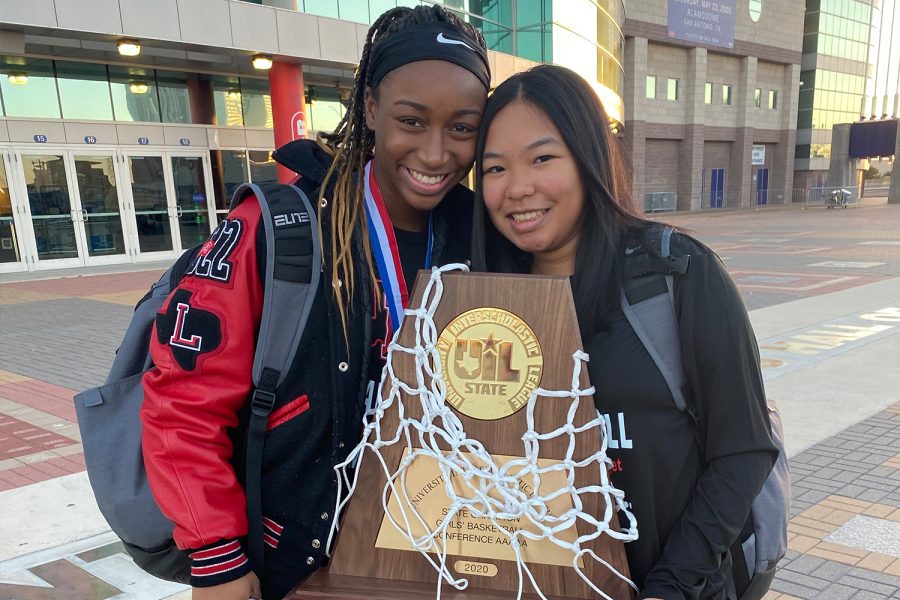 Holding the UIL 5A state championship trophy, MVP of the tournament Jazzy Owens-Barnett and Kayla Pernis (left) stand outside the Alamodome after the Redhawks claimed the first basketball state title in Frisco ISD history. But the team didn't get to celebrate the win when they got back to school as the COVID-19 pandemic forced all students to virtual learning just days after the state championship.

By Remi Williams and Erika Pernis

It’s been eight months since the Redhawks beat Veterans Memorial High School (35-26) in the state final in San Antonio.

No matter how much time has passed, the sound of the cheering fans still rings loud and clear in head coach Ross Reedy’s head, even if he never truly got to celebrate back in Frisco due to the outbreak of COVID-19 shifting all school to a virtual environment.

“I would say winning state is surreal in itself,” Reedy said. “So not going to school maybe gave it a little more ‘did it exactly happen’ vibes. You know not really being able to celebrate it, not being in the hallways, not letting the kids bassic in the championship glow. Then I think that everyone’s attention turned to the virus, pandemic that is COVID-19, and the uncertainty that was loaming because of it.”

For senior Maya Jain, coming home to a new normal was not as important as actually getting to play as the boys’ state championship tournament was ultimately cancelled.

“I think we were just happy we could do it,” Jain said. “Given the circumstances, we got lucky we even got the chance to play.”

For state tournament MVP Jazzy Owens-Barnett, the switch to virtual learning was an abrupt change that was a challenge to overcome.

“We have always been close but we bonded a lot during our playoff/regional/state run,” Owens-Barnett said. “To just not see each other or walk into another practice together was super hard. We got through it eventually but obviously time has passed and celebrating state soon just became a memory to all of us. It also became motivation for us to do it all again.”

Although the state celebration is long over, the players are still waiting on their championship rings.

“They are in, but the biggest thing is, we want to have some way of kind of presenting them,” Reedy said. “And I don’t know how we’ll do that, given that we’re in this COVID era. So other than giving them to the girls, we’re trying to figure out a way to properly unveil them to the girls.”

Along with the Redhawks ring, the team will get to take home something even more unique from a special fan.

Leon Zoellers, a local artist, framer, and teacher, who passed away in October, was an avid supporter of the girls’ basketball team, and he took it upon himself to start designing plaques every season.

“The most recent one was the coolest one, he put the hawk on there and it said we were state champions,” Reedy said. “But he started doing those for us every year, and with the kid’s names and it became something very special.”

Zoellers was even there to witness the team winning the state tournament in the Alamodome.

“The first one I look up and see in the stands is Leon, you know, well into his 70s,” Reedy said. “And he’s given two big fist pumps with his right hand and then he waits a little bit and gives a big fist pump with his left hand.”

The support and loyalty from Zoellers made him more than a fan, and news of his pancreatic cancer diagnosis was tough for the Redhawks.

Knowing how much he had poured into the team, whether it be watching every game or talking to the girls’ families, the team decided to show their appreciation by writing letters to Zoellers.

“When I was writing my letter, I really wanted to express my gratitude for his support of our team, and I felt very sad about his current situation,” junior Kamen Wong said. “Knowing we had a fan who didn’t have a kid on the team, we knew we were doing something right. Continuing to play hard and perform well was our way of thanking him for his support.”

With the new season beginning Friday, the team hopes to continue to show their postseason run. Making it to the championship tournament two years in a row, finishing second in 2019, and claiming the title in 2020, there is a big unknown this year.

“We lost two people due to going all virtual as a response to COVID,” Reedy said. “Then we’ve lost other people in health situations, injury or conditions that are going to prevent them from playing either completely or for a significant time. Now we still have had a big group back and maybe we get in and out of some drills quickly, and in terms of how we’re building our identity, and our collective chemistry.”

One of those players is out, is Owens-Barnett, who suffered a torn achilles after the state championship.

But even though she is starting the year on the sideline, Owens-Barnett isn’t going to let the team rest on its laurels.

“We all just have the mindset of state is over,” Owens-Barnett said. “It’s a new season back to the bottom of the pedestal we go.”

Hear what the team has to say about Leon Zoellers and what his art work means to them in the Thinglink below.

This story was originally published on Wingspan on November 6, 2020.