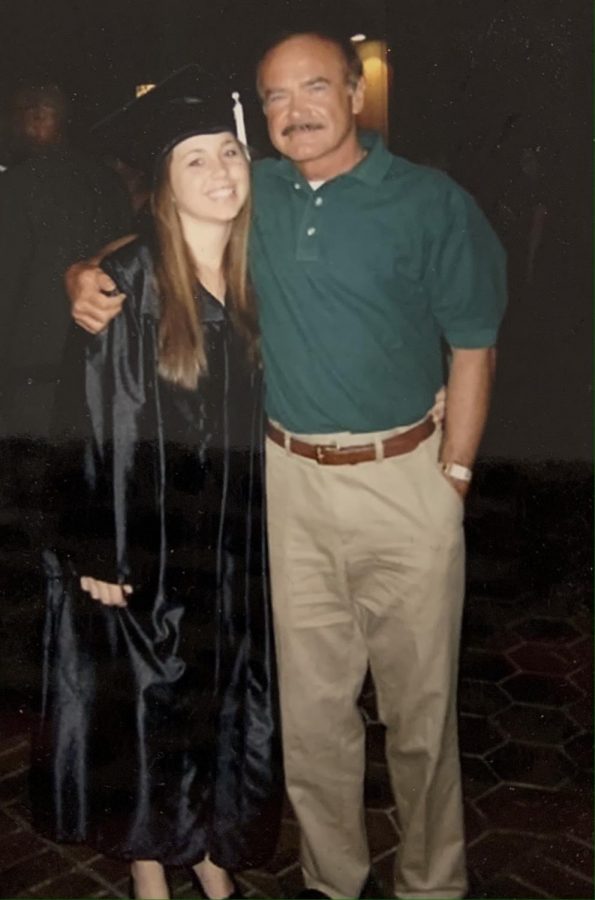 Jones and her father at her high school graduation a year before he passed.

Death to suicide has become so common that it has also almost become numbing.  Mourning those who passed is often the automatic response to hearing of such tragedies.  However, the strenuous battle survivors from suicide loss are left to fight is often forgotten.

The story of James Jones II and his family is a reflection of this effect.

Jones was a father of three.  As a working man, a husband and son, he was loved, cherished and respected by many.

Jones passed by suicide in 2008, leaving his family confused and heartbroken.

Elizabeth Jones, his daughter, had just graduated from high school, unexpectedly commencing her journey into adulthood without the presence of her father.  As it was difficult to distinguish the signs of his mental illness beforehand, her father’s decision was shocking, to say the least.

“I really believe now that my dad was undiagnosed bipolar,” Jones said.  “He came from that kind of generation where there was definitely a stigma with asking for help.  My dad was definitely a suffer-in-silence kind of person, so I would never know when he was sick or when he didn’t feel good just because he didn’t talk about it.”

2008 was a year marked by economic stress due to the stock market crash, so Jones recognized that financial strain in addition to her father’s foot injury that prevented him from maintaining his active lifestyle likely contributed to his sense of hopelessness.

“It was like a bucket of water that filled with little drop after little drop until it eventually overflowed,” she said.  “I think he got to the point where it was too much, and he couldn’t handle it.”

As survivors from suicide loss, her family’s mental well-being took a heavy blow as well.

“This was such new territory to us,” she said.  “We had never walked through anything like this that we just were in survival mode for such a long time.  But everyone’s survival modes look different.”

As her family members had separate personal lives, their grieving processes also differed.

“(My older sister) lived out of state and was preparing to get married,” Jones said.  “Her wedding was a month after my dad died, so for her, it was completely different because she hadn’t seen my dad in a month or two.”

Her younger brother was only ten years old at the time, and he also was not able to be there when his father died.  Her mother inevitably grieved but differently as well.

“My mom held the mindset that she was healing because she never laid in bed all day…but for me, there were times when I just felt like ‘I can’t’ and did stay in bed all day.  I think just grieving differently but together was kind of hard.”

Opening up about suicide death is an emotionally-demanding issue that survivors from suicide loss severely struggle with.  Guilt is a common sentiment that can burden families for years.

“There’s just a lot of survivor’s guilt when you go through something like that,” Jones said, “so I think sometimes when people who haven’t experienced loss or a similar loss, they don’t know what to say.”

The trauma after such a loss as suicide often leaves survivors with questions of “what if”.  Overestimation of their contribution to the death becomes significantly prevalent under such circumstances, as a result.

With the help of her counselor, Jones was fortunate enough to find a way to overcome the heavy guilt she carried after the death.

That is just too much for one person to take on.  Yes, you need to love that person and pray for them and do everything you can, but you can’t bear that burden for the rest of your life.  You have to make peace with it even though that sounds impossible and kind of felt impossible.”

The stigma surrounding mental health issues and particularly suicide due to religious controversy inevitably proposes another obstacle for survivors from suicide loss to face.

Some members of Jones’s family were certainly not exempt from the fear of social disapproval.

“Some of my family like my dad’s parents and siblings didn’t want to tell people how he died,” Jones said.  “They wanted to just say he had a heart attack or there was an accident or something.”

In order to help their healing process, however, Jones felt that it was necessary to be straightforward about her father’s death.

“My mom, my siblings, and I were all in agreement that we needed to be forthcoming — not like we were going to tell everybody we know, but we didn’t want to lie,” she said.  “We didn’t want to cover it up.”

Despite his absence, Jones’s father is kept alive through memory.  Collecting his old shirts, reminiscing over his pictures and laughing at amusing times they had have significantly helped the family through the loss.  His burial ceremony was especially memorable.

“Growing up, we would go to Florida every summer,” Jones said, “and my dad always said he wanted to retire there and move there.  So a few months after he died, we went to Florida and scattered his ashes on the beach.

The bravery of Jones’s family to be able to heal from such an emotionally-tolling event translated into their determination to spread awareness about suicide and help fellow survivors.

“A few years ago, my sister and I created a hashtag and went around a bookstore and put little encouraging notes in books on his birthday,” Jones said.  “My sister also became a volunteer for an organization that allows people who have lost someone to suicide to reach out to have somebody to talk to.

I honestly think it’s really heavy because they are reaching out to her when it’s so very brash and new…so I really admire her for doing that.”

A driving motivation in Jones’s life is to prioritize her mental health in order to avoid finding herself in the same place her father was.  She aspires to help everybody struggling with mental health issues also recognize their self-worth.

“My dad couldn’t see past his immediate future and the things he was struggling with,” Jones said.  “His decision to end his life was so final and so permanent.  Because of that, he missed out on so many good things the last 12 years.  He thought his family would be better off without him, but he was wrong.  We still miss him every day.  To anyone who might be struggling, I hope you know that there is hope.  Things can get better.

You’re so valuable and absolutely can not be replaced.”

This story was originally published on GraniteBayToday.org on November 9, 2020.