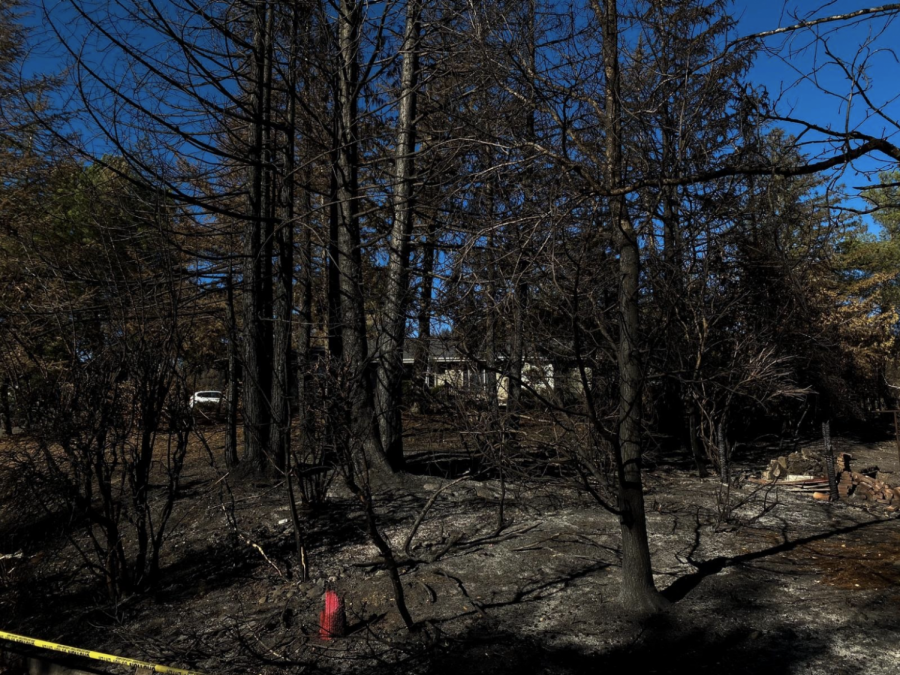 The Santa Rosa Glass Fire burned over 1,517 buildings and was active for 23 days. The cause of the fire is still under investigation.

As we delve deeper into a state of climate disaster, the best way to see the ramifications is simple – just look around.Our Earthis struggling, and it’s evident in everything from the dry forests to the spread of disease.

As the planet continues to heat up, animals of all different shapes and sizes head to the poles to escape the heat. This results in animals coming into contact with other animals that they normally wouldn’t. The collision of different species creates an opportunity for pathogens to infect new hosts.

Additionally, deforestation remains the leading cause of habitat loss worldwide. Loss of habitat forces animals to migrate and come into contact with other animals or people, sharing germs.

Natural disasters are ruinous for society. They can cause up to billions of dollars in damage, leaving millions of people in dire situations, and cause numerous deaths. They are hard enough to navigate alone, but now there’s a new element added to the devastation.

These changes affect everyday life in numerous ways, but perhaps where it hurts the most is during times of environmental disasters. At the most basic level, the health of workers can be put at risk as environmental hazards, and COVID-19 procedures clash.

In the past couple of months, fires have raged over Northern California, causing evacuations, destruction, and poor air quality.

While businesses do the best they can to adhere to all therequired regulations, there is no perfect solution. On days when the air quality was uncomfortable, businesses were able to combat the quality through ventilation systems like fans and air conditioning.

When working a shift at Yumi Yogurt in San Mateo, Cooper Perez, a Yumi Yogurt employee, was able to complete her shift without any difficulties with the air.

“While working during the fire, my employers kept a fan on for ventilation purposes,” Perez said. “Though the door had to be open due to COVID-19regulations, the air didn’t bother me, and I felt fine throughout my whole shift.”

Kylie Holzman, an employee at Pete’s Coffee in Burlingame, had a similar experience as Perez. Working indoors with ventilation, she was able to work with minimal discomfort.

“I am lucky that Iwork indoors, so the air quality wasn’t a big deal. To protect ourselves and customers, [Pete’s Coffee] kept the front door and all windows shut and had the fan running,” Holzman said. “It wasn’t a perfect scenario, as customers would let in the bad air as they entered, but we did our best to make it safe for everyone.”

Though businesses were able to combat the air quality at more moderate levels, some employees began to see effects on their health as it grew more severe.

“Working when the air quality was bad was very different from my normal shifts,” said Brooke Oshie, another employee at Yumi Yogurt. “I definitely noticed the smell and the overall condition of the sky. By the end of my shift, my head hurt a little, and my chest felt a little tight.”

Oshie worked in San Mateo when the air quality was at its worst. With an Air Quality Index (AQI) well into 300s, she saw definite declines in her health by the end of her shift despite the efforts to ventilate. COVID-19 regulations kept the doors constantly open as customers entered the storefront, causing unhealthy particles to sit inside the store.

Clashes with COVID-19 and the fires are seen at a basic level in the workplace, where safety concerns begin to conflict with each. However, these problems are nothing compared to those faced at the sites of the burns.
Water

Residents of the Bay Area are no strangers to the droughts of California. To many, it feels miraculous and unique when a blanket of rainy clouds replaces the translucent blue sky. According to U.S. Climate data, San Francisco receives a mere 23.66 inches of rain annually, falling well below the national average of 30 inches.

Why are there so many droughts in California? The state is used to dryness, but droughts in recent times have been the worst in its recorded history. The root of the problem is global warming. Higher temperatures make wet regions wetter and dry areas drier by causing shifts in weather patterns; for the Bay Area, storms are shifted away from the California coastline.

According to the National Integrated Drought Information System (NIDIS), the longest drought since 2000 lasted 376 weeks        – from 2011 to 2019. While California is no longer in an official state of emergency, over 15 million residents (41% of California’s population) remain in drought conditions. These residents may have to follow water restrictions or experience water shortages. 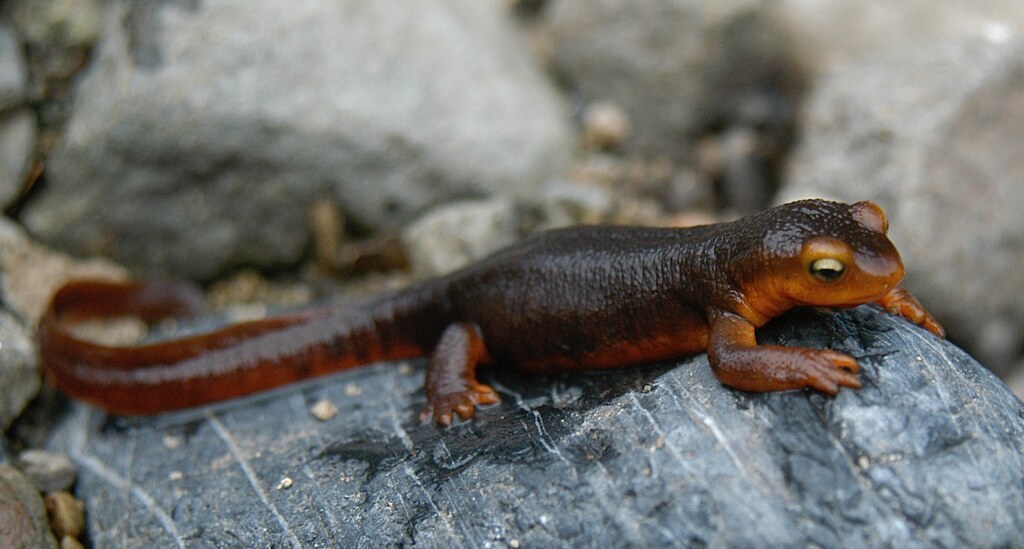 The Califonia newt is one of California’s treasured wildlife severely harmed by climate change and droughts.
Plants and animals are highly vulnerable to harsh conditions, making them susceptible to terminal injury: death by dehydration, starvation, and loss of habitat are among these many challenges.

In particular, amphibians are profoundly affected by climate change. According to UCLA, it is estimated that the amphibian extinction rate is 45,000 times greater with human influence than without it.

For example, the California newt is especially hard-hit by droughts. Their habitat ranges from San Diego to the Bay Area, and they are known for their orange bellies. They can occasionally be spotted under a moist log or relaxing in a small pond. While those around the Bay area are yet to be severely affected, newts in southern California have been negatively impacted by climate change. From 2008 to 2016, their body mass has decreased by an average of 20%.

Further details are still being studied, but one thing is clear: it is only a matter of time before these effects worsen and reach the newts in the Bay Area. While California’s guidelines to reduce water use are beneficial, it is not a solution to preventing intense droughts. The problem stems from global warming and the buildup of greenhouse gasses.

Rain is a blessing for wildfires, but for the San Francisco Bay, it’s a nightmare. When water runs along streets and gutters towards storm drains, they pick up trash, microparticles, and chemicals. Eventually, these pollutants are pumped out into the Bay. San Francisco Estuary Institute (SFEI) estimates that 7 trillion particles of microplastics make their way into the Bay annually. Additionally, fertilizers, pesticides, oils, and – worst of all – toxins like polychlorinated biphenyls (PBC) as well as Mercury all run into the Bay. 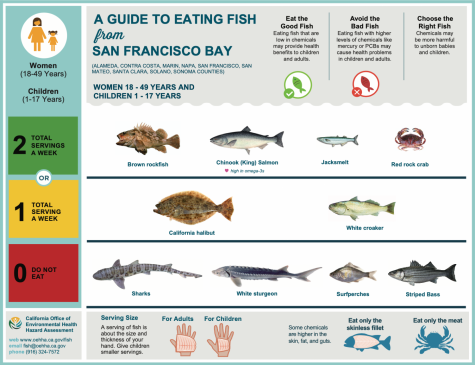 Currently, 91 contaminants are monitored by the Safe Drinking Water Act, but this is minuscule compared to the hundreds of thousands of chemicals in use today. Fertilizers provide the nutrients needed for algae to grow, lowering the oxygen content in the water. At the same time, PBC and Mercury contaminate the fish in the San Francisco Bay. According to the California Office of Environmental Health Hazard Assessment (OEHHA), White Sturgeons, sharks, Surfperches, and Striped Bass have such high concentrations of these chemicals that eating them is unsafe.

Chemicals are passed on from plankton to fish, to bigger fish, and to top predators like the Harbors Seals—each step of the way, there is an increase of concentrations. The Harbor Seals range all across the globe, including the San Francisco Bay. These creatures grow to a little over five feet in length and 130 lbs. Their coats are gray and sport black dots across their bodies. Harbor Seals are not endangered, but they cannot escape the effects of environmental change. Studies from the California Academy of Sciences reveal that toxins lower reproduction and dampen their immune systems. A decline in Harbor Seals in Scotland is attributed to the chemicals in their waters, and there’s no telling if the population around the Bay will also suffer similar effects from prolonged pollution. 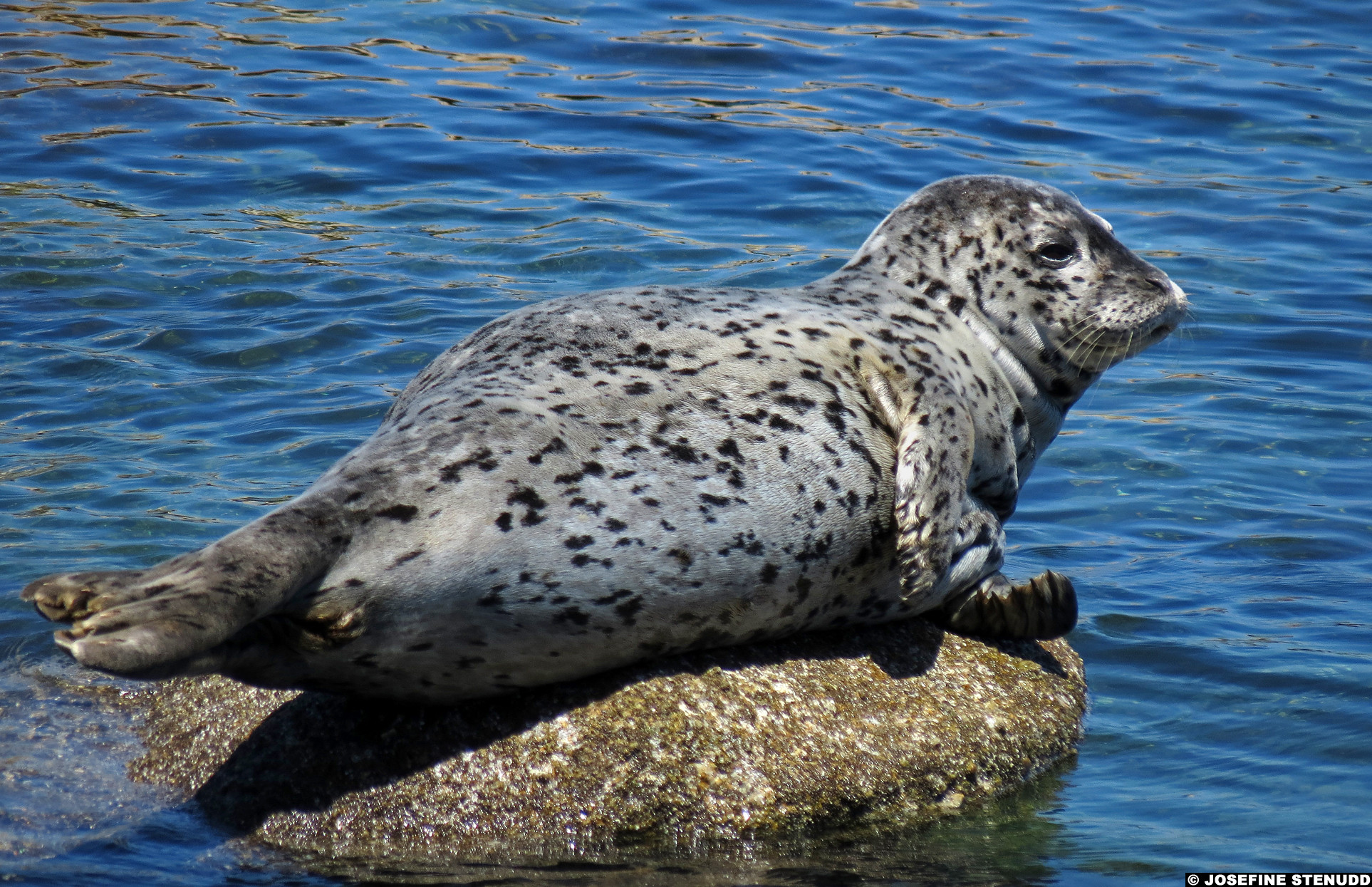 Harbor seals live with the pollution humans dump into the ocean, including trash, microplastics, and harmful chemicals.
Of course, if the problem were just water pollution, it would be much simpler. The warming water shifts the seals’ prey elsewhere and supports new pathogens that cause diseases. Furthermore, the rising water level and strong storms can erode the shoreline causing loss of habitat. While water pollution most directly affects the seals, humans also eat the sea creatures of the Bay. The waste humans pump out into the ocean come full circle and make their way back to hurt the polluters.
Air Pollution

Going hand-in-hand with global warming is the most commonly known form of environmental change, air pollution. Greenhouse gases trap heat from the Sun to help regulate the temperature of the planet. The Earth is all about balance; low concentrations of greenhouse gases can bring about ice ages, whereas high concentrations heat the Earth.

Emissions from agriculture, transportation, landfill, and buildings are all disrupting that balance. Following the Industrial Revolution, the production of greenhouse gasses rose drastically. Since 1880, the Earth has warmed a little over 2 degrees Fahrenheit overall, according to NASA.

The Bay Area is no exception. Since the 1950’s the average temperature has risen 1.7 degrees Fahrenheit, and in 2018 San Francisco ranked 49th out of the 723 worst air polluted cities in the U.S., according to IQ air. These statistics are quite frightening on paper, but those fears became a reality to the Bay Checkerspot Butterfly.

As the name implies, these butterflies display a beautiful white and orange checkered pattern on their wings. They only reside around the Bay Area, specifically Edgewood Preserve, Kirby Canyon, Coyote Ridge, and San Bruno Mountain State Park. Of the sites listed, the butterflies of Edgewood Wildlife Preserve, located next to Highway 280, were hit the hardest by air pollution.

Initially, the preserve was home to a healthy population until 2003, when the butterflies disappeared. It was soon discovered that nitrogen from car emissions helped invasive grasses take over the hillside and overrun the native plants; the butterfly larva’s food, as well as the butterflies themselves, went extinct. Since 2007, scientists and volunteers have continued to reintroduce these butterflies to Edgewood. They mow down the invasive grasses and release caterpillars from the neighboring communities into the reserve. The Bay Checkerspots of Edgewood has been making their slow recovery. 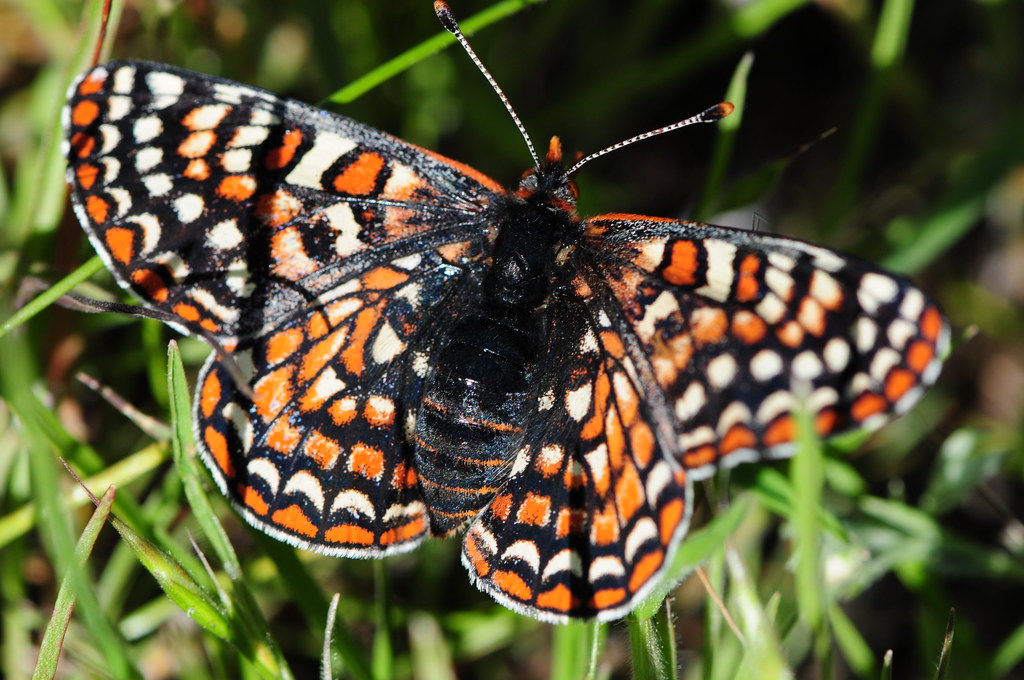 The Bay Checkerspot Butterfly, native to the Bay Area, are victims of air pollution.
The story of the Bay Checkerspot in Edgewood leaves both a sinister and hopeful note for air pollution in the Bay Area. California is fighting to resolve that problem, potentially saving species in a similar situation as the butterflies. By 2045 California has a goal of going carbon-free. Furthermore, on Sept. 23, Gov. Gavin Newsom issued an ambitious executive order:

This story was originally published on Scot Scoop News on November 11, 2020.