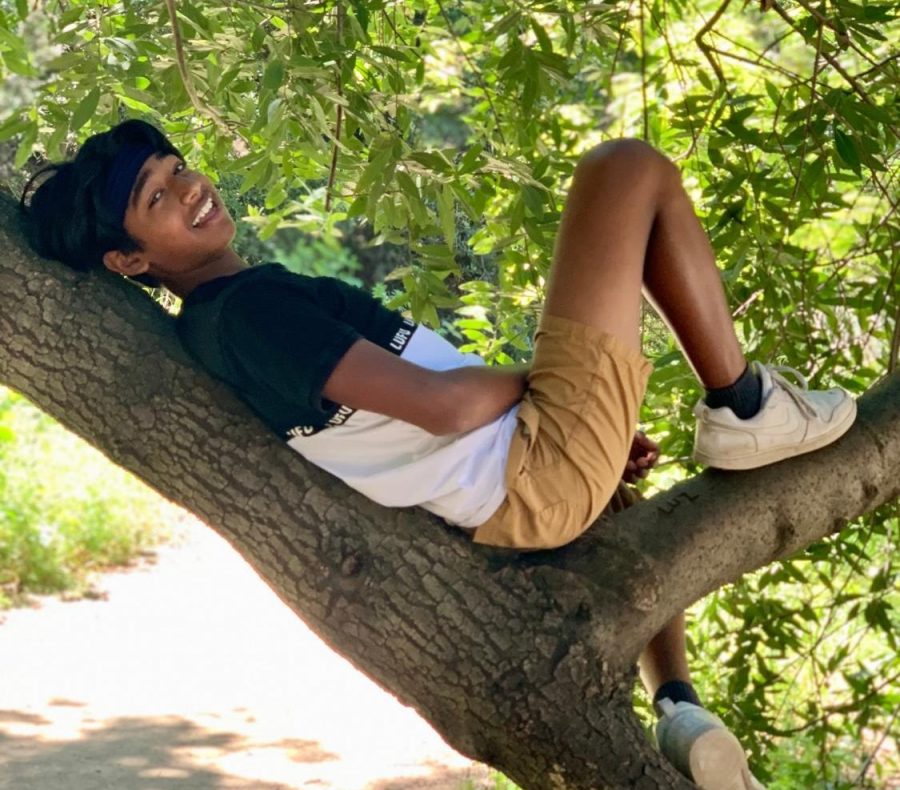 Taken in May of 2020, this is Avaneesh Athuluri at the age of 14. Photo used with permission of Murali Athuluri

[dropcap]G[/dropcap]rowing up, he was always the smallest kid in his classes. Not just physically smaller, but also by age — born on Sept. 22, 2005, Avaneesh Athuluri just made it into kindergarten before the end-of-September cutoff date. And yet, according to his father Murali Athuluri, being small wasn’t the first thing most people noticed about Avaneesh. They first noticed his “big, wide smile.”

“For everything, he would smile,” Murali said. “In fact, it is so contagious even if he’s sad he’ll smile. Even we, as soon as we see his smile, whatever and however sad or mad we are, it kind of takes away everything.”

Born in Portsmouth, New Hampshire, Avaneesh lived in Hampton, New Hampshire, a small town on the Atlantic Coast, for the first 14 years of his life before moving to the Bay Area in September of 2019. He was part of a family of five: his father, Murali Athuluri; his mother, Jayashree Athuluri; his sister, Aditi Athuluri, currently a seventh grader attending Kennedy Middle School; and their dog, Ranger. Avaneesh was a second-generation Indian-American, and both Murali and Jayashree were born and grew up in South India. Murali calls their family “a mixed bag of South Indian culture.”

As a child, Avaneesh was extremely outgoing and curious, always looking to explore and travel with his family, or alone, even visiting India by himself at the age of eight. In Hampton, the Athuluris were the sole Indian family for miles — the only ones in Avaneesh’s school district. Yet, they emphasized embracing not only local American culture, but also Indian culture, and ultimately finding the best of both worlds. They retained and passed down customs by celebrating festivals and engaging in cultural dances and music, even starting an impromptu, unofficial Indian association in Hampton that Avaneesh was heavily involved in. And he loved music; Murali recalls that while hosting parties, Avaneesh was the kids’ DJ and Murali would be the adults’ DJ.

Murali says that there wasn’t a single thing in the household that Avaneesh wasn’t a part of — he would help with dishwashing, cooking, yard work and laundry, including his sister’s. He would comb and braid Aditi’s hair, and although they didn’t frequently show it to their parents, they were close. They would bond and play together, especially when they were alone and had the house to themselves. Despite their age gap and different friend circles, Aditi looked up to him, and Avaneesh never hesitated to help her.

Due to living on the East Coast, Murali says Avaneesh and Aditi both learned how to ski and ice skate. Unlike in the Bay Area, these activities were common; as toddlers, they learned to walk and almost simultaneously to ski, often playing in the snow in their backyard. Avaneesh loved skiing and skating, and after moving to California, he was excited about eventually learning how to surf.

Prior to moving, the Athuluris considered many places around the U.S. including Texas, North Carolina, Virginia and Massachusetts, but eventually settled on California because of Avaneesh — he had friends in the Bay Area that he had met through participating in summer programs, and the allure of the Apple headquarters in Cupertino was inline with his avid interest in technology.

Avaneesh and Jayashree moved in September of 2019, and Murali and Aditi followed in December. The family moved due to a variety of reasons, including a longing for a larger Indian-American community and diversity in general, as well as the realization that Murali and Jayashree would soon be empty nesters after their children went off to college, and therefore wanting to be closer to friends and family in the Bay Area. Avaneesh, according to Murali, had an unusually good sense of direction. He knew where the closest Starbucks was, where MVHS was, which highway to take to visit his cousins in Fremont — all within the span of a couple weeks after moving to Cupertino.

After Avaneesh and Jayashree arrived in Cupertino a week after the 2019-20 school year started, Murali recalls Avaneesh being excited, saying “I already lost a week of school, I want to be with everybody and I want to meet my new friends.” Murali could tell Avaneesh genuinely enjoyed his classes and was enthusiastic about learning. Not only that, but he recalls that Avaneesh loved going to Starbucks with his friends after school; Avaneesh would conjure up a long bill of drinks and, when asked if he had planned to drink them all, Avaneesh would respond by explaining that no, he had just decided to treat all of his friends.

“His favorite part about MVHS was this whole concept of high school, the diversity and the ability that they give students to explore themselves,” Murali said. “I know he enjoyed the school, just coming to school he enjoyed, going to Starbucks during breaks, and that whole concept of a classroom, he loved coming to the classroom. He really hated COVID — he didn’t want to do online — he’s like, ‘I want to go to school and be with my friends.’ And at the same time, he was also paranoid and was like, ‘They should not open the school because it’s not safe,’ and so he was conflicted by both of those.”

Murali observes that it seemed as though Avaneesh wanted to be a part of every single club on campus, and was a member of Monta Vista Speech, had recently joined Model UN and was a part of the student anti-racism task force — and Murali keeps discovering more connections that Avaneesh forged throughout his time at MVHS, as people continue to reach out with condolences to their family.

In retrospect, as well as looking to the future regarding his daughter Aditi, Murali wishes that there were some way for parents to better know their children and their childrens’ friends. He points out that society emphasizes giving teenagers their privacy and space, creating a disconnect — which increases when teenagers are first or second-generation immigrants. Yet, it’s important to him that the school, or our communities and society in general, work to bridge this divide and create a coalition in which parents remove judgement and embrace teenagers: not just their own children, but everyone around them.

“In the times we are in right now where stresses are so high and people have lost physical contact, where every relationship is just virtual but not physical, I don’t think the phase we are in right now is sustainable,” Murali said. “And looking from a long term perspective, it’s going to be very difficult for people to cope with their own feelings, and I’ve always believed in having physical relationships. And I used to tell [Avaneesh] a lot, ‘Bring your friends. Let’s go play — let’s have some fun in the backyard.’”

The Athuluri family didn’t get to fully experience watching Avaneesh grow up, and his teenage years, according to Murali, felt fleeting. Murali recalls looking back on pictures of Avaneesh taken in the last four months. Murali realized that his face seemed to have transformed from a child to a young man, and that he had grown four inches, now surpassing Murali — Avaneesh would put his arms around him and joke about being taller than him and therefore not needing to listen to his dad anymore.

“[Avaneesh] wanted to become a doctor,” Murali said. “But over the last few weeks, he was like, ‘I think I should become a lawyer, because my goal is to help as many people as possible, and if I am a doctor, I can only help one person at a time. But if I’m a lawyer and I run for the House of Representatives, then I can become an educator and politician and help more people than just one person at a time.’ That’s the type of mentality he had.”

This story was originally published on El Estoque on November 16, 2020.