Red, white and cries of “vote blue, no matter who”

Being a Californian at the center of the 2020 presidential election 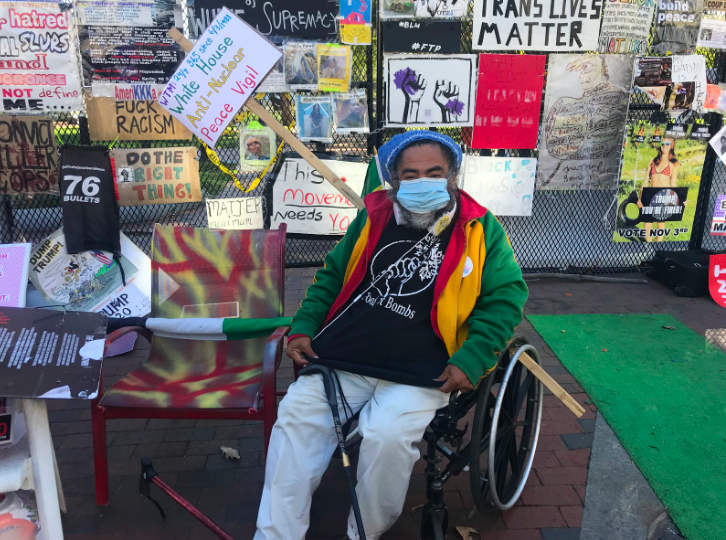 Philipos Melaku-Bello sits in his wheelchair in front of the poster-covered fences. Melaku-Bello has spent years protesting for various causes outside of the White House, particularly those pertaining to racial and immigration injustices.

The first presidential election that I can really remember was that of 2012, when Barack Obama won over the nation to cement a second term for himself in office. After that came the tumultuous 2016 election, during which I fell asleep on the living room couch and later woke up at 7:20 the next morning to hear of Donald Trump’s win over Hillary Clinton.

This year, I spent Nov. 3 in the epicenter of all American political drama: Washington, D.C., America’s capital.

Washington, D.C. has a population of about 705,749 people as of July 2019, according to the U.S. Census Bureau. It is a heavily liberal area and has a strong tendency to vote for Democrats; according to 270toWin, the percentage of citizens who voted for Democratic presidential nominees has not fallen below 85% since the presidential election of 2000.

The city’s liberal predisposition shows, too. My family and I arrived in D.C. in our rented minivan at about 9:00 p.m. EST on Nov. 2, and on our way into the city, I noted frequent outcroppings of white signs with “Biden” splayed across the fronts. Not once did I see a sign that read “Trump 2020.”

I woke up the next morning and went on a short walk with my dad and brother before going to school online. We stayed a little bit outside of the downtown area — my parents didn’t want to be too close to any potential “action” — in a rented Airbnb located in the basement of a pretty blue apartment building with white accents adorning the sides.

The three of us walked for about half an hour or so, taking note of the chill in the air (though it was much better than the frigid Pennsylvania weather which we had previously braved) and the elegant buildings that lined the sidewalks. What I noticed most of all, though, was the frequency of “Black Lives Matter” signs and pride flags. 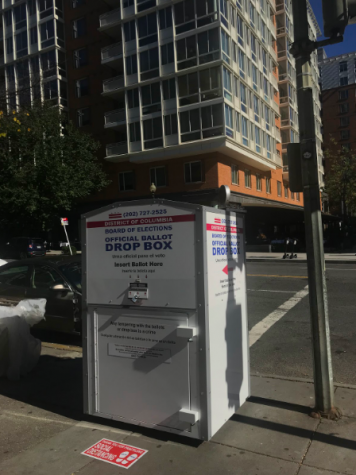 As we neared the center of the city, we noticed a number of boarded-up buildings, typically those of larger companies and businesses with big windows. Ballot boxes resided on the occasional street corner and on the sidewalks by major intersections. (Bailey Andera/Talon)

Something else began to spark our interest as we approached Dupont Circle. The closer we got to the inner parts of the city, the more we began to see buildings with boarded-up doors and windows. It was surprising, honestly; given that Biden had been largely favored to win and D.C. is such an overwhelmingly liberal area, I hadn’t considered that maybe D.C. faced the prospect of riots.

In the safety of our Airbnb, I spent the pre-election hours scanning social media to gauge my peers’ thoughts. It had been more or less what I’d expected, but something caught me off guard. My mom had sent me a screenshot off of a Facebook post, one that displayed six full non-scalable fences circling the White House premises. This article by Fox News includes a better-quality picture of the fences.

That night, it was decided that we wouldn’t go out to dinner, and instead we opted to make food in the apartment.

The television stayed on from 4 p.m. to 2:15 a.m., and I was the last of my family to trudge off to bed after a long, stress-filled, pace-inducing initial election report. Granted, we were all aware that no numbers were solid, due to the sheer number of mail-in ballots that would be counted in the following days. After all, at least 101.9 million people — 73% of 2016’s total votes — voted early across the nation.

Despite this, we were all tense. Tacos were eaten in a very casual manner from my perch in a chair; my dad sat on the floor and my brother and mom shared the couch. I flicked between Fox News and Google’s election prediction map on my Chromebook in an almost frenzied manner, refreshing each tab every 15 seconds or so, while CNN’s coverage played from the television 20 feet away.

Both parents bid me goodnight in the hours after midnight, but since the butterflies in my stomach had since seemed to grow razor-sharp teeth and two-inch claws, I decided to stay up a little bit longer. I managed to catch the speeches of both nominees, who each took to their respective podiums to declare hopes for victory, before turning off the screen.

The next day, my family and I decided to walk through the national mall and visit a number of important sightseeing landmarks. On our way there, we stopped at a Whole Foods for my mom to find a bathroom, and unsurprisingly, that was boarded up as well, though this one also had a policeman posted outside.

In order to try to get his insight, I approached him and initiated conversation. His name was Andre Davis and he explained that he really only worked outside of Whole Foods as part of his part-time job. Davis was young and spoke lightheartedly in conversation, but upon asking him about his job in relation to the political climate, he seemed well-versed enough in conversational strategies to effectively dodge the majority of my questions with a well-timed smile and easy — yet vague — reply.

After a few minutes of this back-and-forth conversation, I essentially called it quits. I didn’t blame him, though, as I assumed he had probably been told to keep an air of neutrality when asked questions. Nevertheless, Davis was polite when I thanked him for his time, and wished me a good day.

We continued closer to the inner parts of the city; our destination the National Mall, a fabled stretch of land which contains some of America’s most treasured landmarks, museums and noteworthy government buildings. The White House was, as we expected, entirely gated off — we came from the back entrance, and the best glimpse I could get was of a pale smear behind rows of iron bars and police vehicles.

I didn’t see the groups out back so much as I heard them first. There were about 150 or so people milling around and seated outside the gates in the back, some sporting signs that read “Jesus Saves” and others carrying “Settle for Biden” on slats of cardboard. The view through the gates was almost nil, as the gate itself was covered in a variety of colorful posters, some handmade and others created digitally, calling for a win for Biden, for justice for the victims of police brutality, for protection of transgender lives. People chanted, whooped, hollered and yelled.

I talked to a man there, one of the people who was sitting along the sidewalk facing the street. He was in a wheelchair and sported a pair of Black Lives Matter headphones. The man — Philipos Melaku-Bello, as he introduced himself — greeted me warmly and upon my asking to speak to him, beckoned for me to sit near.

When I told him where I was from, he seemed presently surprised; Melaku-Bello had previously lived in the Los Angeles area for a good portion of his life, and frequently rode his bike down to the border from closer towns in California. I learned that he had spent years outside of the White House with the purpose of protesting various injustices.

He told me about one of his greatest motivators, children separated from their parents along the border, and how it still drives him to push for better. Melaku-Bello expressed a hope that minority groups could come together and create a necessary change by working as one in the voting booths.

“We, as a voting block, might not have everything in common, but we have enough in common. There should be love between us, enough of it to defeat evil,” Melaku-Bello said.

When it was time for me to go, he bid me farewell with a “peace be with you, sister” and a smile.

Upon doing a quick Google search of his name, I found that a podcast called “Working” put out an episode on Melaku-Bello. The link is here if you’d like to give it a listen, given that they’ll have done a much better job than I have in telling his story.

The next few days were a flurry of repeatedly checking Twitter for updates while out and about, and then immediately flicking on the news as soon as we got back to our home away from home. Every time new votes came in, we zeroed in alongside the millions of Americans who were desperately yearning for any sort of new results.

On our last day in D.C., Nov. 7, we had all of our stuff packed into a car to drive around for a few hours and then head to the airport. Since we finally had the luxury of wheels again — everything had previously been on foot or by Metro — we took advantage by driving back to the National Mall for a quick picture of the family rubber chicken in front of the Washington Monument.

It was then, as we pulled away from the towering obelisk created in memory of the nation’s first president, did I look down at my phone to see the announcement that Joe Biden was projected to be America’s 46th commander-in-chief.

As we drove through the cramped streets in the hopes of getting to Georgetown for lunch, the city’s feelings on such information immediately became abundantly clear. I watched as people cheered on the sidewalk and others honked their horns with whoops of victory. We squawked the rubber chicken in solidarity, which got a couple of weird looks but a lot more laughter from passersby than anything else.

The honking and hollering didn’t cease when we parked for lunch. If anything, it seemed to grow in its fervor. The restaurant was situated along a popular road, and thus we were able to watch as people waving flags and dancing through the moonroofs of cars slowly paraded by. Every time the flurry of sounds ceased, it started back up again no less than thirty seconds later. I heard “Party in the U.S.A.” by Miley Cyrus at least three different times.

It was, to say the least, an entirely different experience than what I would have had in Thousand Oaks, California. The election as a whole was a nerve-wracking four days, but instead of viewing it through my typical lens of distance, I was granted the opportunity to watch it up close, in real time. I was able to see people cheer and yell and cry, and I did so with the comparison of my considerably calmer life back home.

To watch a historic election as a teenager is one thing, but to watch it in the center of it all, the eye of the hurricane? Well, it’s something else entirely.

This story was originally published on The Oak Park Talon on November 19, 2020.