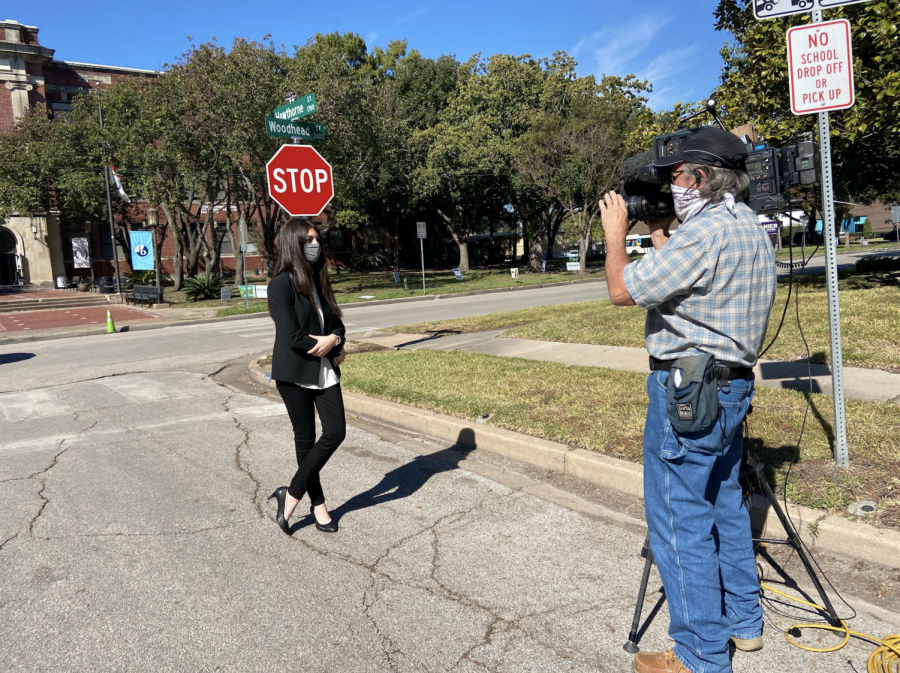 Senior Tasha Savas, who serves as the presiding judge of Precinct 0060, was interviewed by Fox News.

As Jackson Jones helped open the polls early on the morning of Nov. 3, he noticed a crowd of Trump supporters gathering across the street. They began to use megaphones and play loud music, which violates electioneering laws. The police were called in several times. Jones said that Biden supporters were there as well, but were calmer. The senior suspects the racist slurs they were shouting, along with the considerable number of parking spots they occupied, dissuaded some from voting.

“Texas broke records for early voting, which partly explains the low turnout at my polling location, but I think a lot of it had to do with voter intimidation,” Jones said.

Many students volunteered at the polls on election day. While most worked as electronic support specialists, senior Tasha Savas, president of the Young Liberals Organization, interpreted election laws at Lanier Middle School as the presiding judge of Precinct 0060.

“It’s my first time as a judge, but I’ve done quite a few elections as a clerk,” Savas said in an interview with Fox 26 Houston. “It’s really exciting for me. I’m one of the youngest — I think the youngest — presiding judge[s]. The average age is 65 years old, so it’s really an honor to be in this position.”

Over 100,000 people in Harris County participated in drive-through voting, which may have decreased Election Day turnout.

“[Election Day] was so uneventful,” said senior Meridian Monthy, who worked at the West University Scout House. “Our total turnout was 250, and I know that many polling locations around us had less than 100 voters.”

While the low turnout ensured ample space to socially distance, senior Anne-Charlotte Gillard witnessed other volunteers frequently removing their masks. Gillard, who volunteered at the Southside Place Park Clubhouse, said that the Republican presiding judge at her polling location did not adhere to social distancing guidelines.

“Many of the clerks at my polling location were friends with the presiding judge, and they were hugging and getting really close to each other,” Gillard said. “It made me very anxious.”

According to Savas, election judges can decide to require their staff to wear masks. While Savas mandated mask-wearing among the volunteers, judges have no control over whether voters wear masks.

Poll workers attended mandatory training sessions to learn about voting in-person and by mail. Volunteers were taught how to help voters in the disabled community. Due to concerns of voter fraud, the classes placed an emphasis on transparency. Many students cited a desire for a free election as their reason for working the polls.

“There was so much talk about fraudulent votes and polling places shutting down,” senior Piper Edwards said. “I just wanted to make sure that I was doing my part to help people be able to fulfill their civic duty.”

The average age of poll workers is over 65 — well within the margin of people at higher-risk for COVID-19. To protect those at risk from the virus, there was a surge of younger volunteers this year at the polls. However, the majority of poll workers were still older, according to junior John Perdue.

“When I would step back and realize where I was, I would start thinking, ‘Oh gosh, I’m hanging out with a bunch of 60-year-olds,’” Perdue said. “Mainly, though, it was just nice that so many people were there there to help out.”

While volunteers agree that in-school education on voting is vital, they urge students to take the next step and become a part of the movement for change.

“I am 17 years old, and I could not vote in this election,” Monthy said. “I am very passionate about politics, and I believe that we as young people have so much potential to change the world with what we do. I simply felt a strong need to be involved.”

This story was originally published on The Review on November 20, 2020.