One student finds their way to self-acceptance 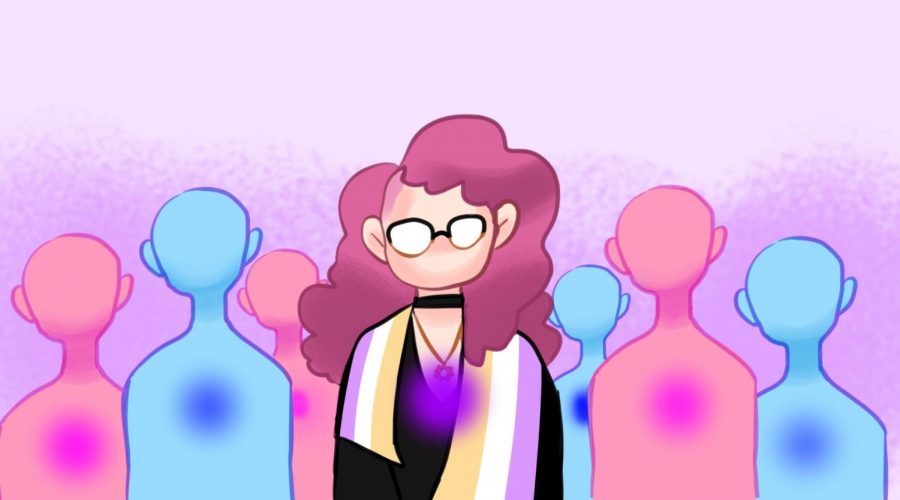 Senior Milas Metzinger represents their uniqueness in a crowd of boys and girls.

“My name is Milas Metzinger. It wasn’t always Milas, but that’s the name I settled on after coming to terms with myself.”

Upon first glancing at senior Milas Metzinger, their vibrant pink hair catches the eye, dyed a particular shade of magenta to reflect their divergence from the norm. Metzinger identifies as agender ‒ neither as a girl nor a boy ‒ and uses they/them pronouns. Their life is a long voyage of self-discovery that still continues today. They have survived both the high tides of acceptance and the low tides of denial. This is their story.

“Even to me and to the psychologists, I feel like that was probably not the right answer; it felt wrong,” Metzinger said. “I thought that since people called me a girl that must be what I was.”

Metzinger continued to identify as a girl until fifth grade when they discovered the internet and YouTube. One particular video that opened their eyes was of a beautiful girl who wasn’t always a girl and identified as transgender.

“That really introduced me to the concept that if you are told you are one thing, you can change that if you don’t feel like it is right,” Metzinger said.

Once they realized that they don’t have to be exactly one thing, Metzinger questioned if they were really a boy, but they never really felt like one. At the same time, they didn’t feel comfortable as a girl either. Feeling frustrated, they began to talk to transgender people online and learned the term “non-binary.” For a while, Metzinger used both the pronouns she/her and they/them to try out how it felt.

“At first, I really struggled with being non-binary, but once I started using she/they pronouns, I found that I became increasingly more uncomfortable with being referred to by the pronoun ‘she,’” Metzinger said.

In freshman year, Metzinger took a leap of faith and asked their Spanish teacher, Zoraida Vazquez, to not call them by their birth name. Instead, they asked to be called by the name Milas and they/them pronouns. Vazquez complied. For Metzinger, that was a moment of euphoria that gave them the confidence to use they/them pronouns more regularly. As Metzinger began to introduce themself as agender to more, there were still two important individuals that did not know about their identity: their parents.

“My parents were actually some of the last people I came out to officially,” Metzinger said. “I tried to come out to them multiple times throughout the years, and they just kind of forgot about it, which was frustrating.”

The first time Metzinger came out to their mom and asked her to call them “Milas” using they/them pronouns, their mother did so for about an hour and then continued to call them by their birth name. Metzinger did not give up on reminding their parents of how they wanted to be called, and in the end, it was a success.

When Metzinger comes out to new people, they try to stay calm and await the response of others. Sometimes, the responses are negative, and people are hesitant to understand their identity, while other times, they get a positive and supportive response. Though the process of coming out was long and sometimes difficult, Metzinger doesn’t regret it.

“Whenever you come out to someone, you expose a part of yourself that only you know up until that point,” Metzinger said. “The best thing is when you come out and someone else also comes out.”

This story was originally published on The Purple Tide | The Knightly News on December 1, 2020.