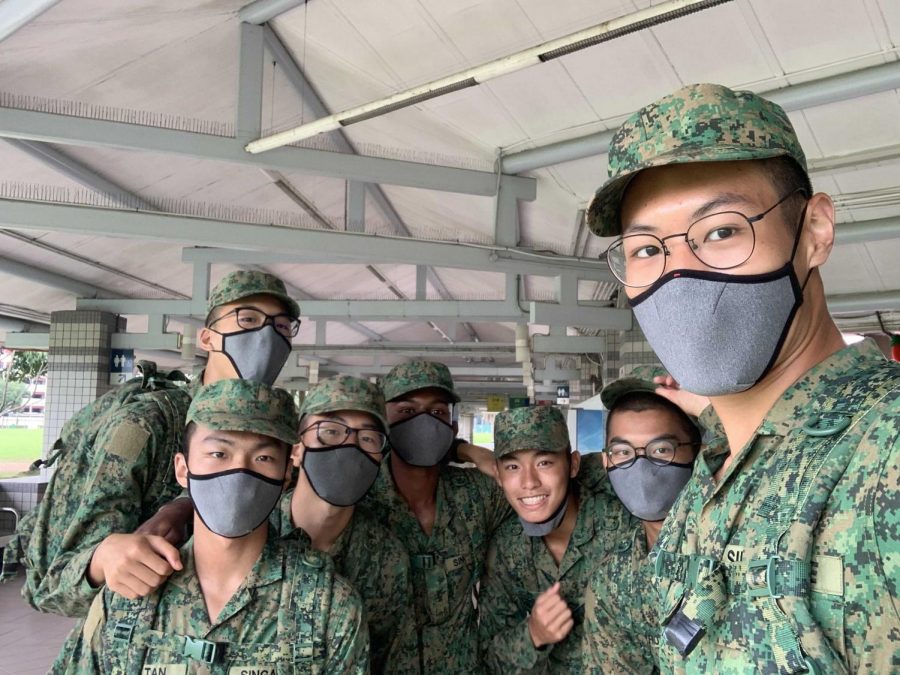 Daniel Lim (second row left) poses with his peers in the Singapore Army during training. Lim is serving two years of mandatory service in the country while bonding with his platoon and strengthening his leadership skills in the process.

While his former classmates attended virtual classes from the comfort of their homes, Daniel Lim, LAHS ’20, was running through the muddy jungle floor of Singapore in the middle of a thunderstorm with 60 pounds of gear on his back.

Lim’s unusual post-graduation experience is the result of Singapore’s mandatory conscription law: All Singaporean males must serve two years of full-time duty as National Servicemen or face a jail sentence upon entering the country for avoiding service. Although he was born and raised entirely in the United States and has never even lived in the country, Lim’s Singaporean citizenship through his father still requires him to serve.

Growing up, Lim was well aware of the hardships he would endure in the National Service, but he tried to keep a positive attitude about the prospect. Having seen his older brother gain self-discipline and responsibility after the experience, he maintained a resilient mindset.

Lim reported for duty on Monday, September 28, to start basic military training with his platoon. The first stage of training involved multiple intense workouts per day and afternoon lessons in which conscripts learned to carry out arrests and handle firearms.

“At that point, you’re the lowest of the low while they’re getting you physically fit,” he said. “I just kept thinking to myself, ‘It’s something I have to do. I’ll get through it.’”

Lim continued his training in field camp, a program in which platoons simulate war in the jungles of Singapore. It’s a key part of training in the Singapore Army, which carries out land operations to deter foreign aggression. On one of these field camp missions, Lim’s platoon spent hours digging a hole in the muddy ground, which they were expected to sleep in at night.

“The idea of this hole is that it’s underground so that when you’re taking cover from an artillery attack, then the shrapnel won’t go in, it’ll go over your head,” Lim explained.

When a powerful thunderstorm hit, the platoon had to run through the jungle for nearly a mile to take refuge in their constructed shelters and avoid getting struck by lightning.

“It’s unhygienic — people are constantly getting bit by ants and it smells really bad,” Lim said. “There’s excrement everywhere and you have to reuse your clothes, so it all ferments and the smell gets rancid. When we got back from our shelter, the holes were filled with water like a primitive swimming pool. It was tragic.”

On the day of that particular incident, Lim was in charge of a group of 16 boys within his platoon. He feels that field camp instilled a sense of camaraderie in the group and gave him an opportunity to hone his leadership skills.

As a conscript from overseas, Lim was placed in a platoon with others who hadn’t grown up in Singapore and thus weren’t used to life there. This has helped him acclimate to the unfamiliar military lifestyle while forming close relationships with his peers.

“The whole point of the army is that we’re all equal, no matter our background,” Lim said. “Some of us come from really wealthy backgrounds and some are in gangs and grew up on the streets. Forming relationships has been pretty easy because we’re treated exactly the same way. We all suffer together.”

For Lim, the most difficult part of military service in Singapore is being away from his family and friends. Although conscripts have access to their phones when they’re in bunks, they rarely have a chance to use them. Designated free time is constrained by the need to shower and do laundry by hand, leaving little opportunity for relaxation.

“I’m pretty much alone in Singapore,” Lim said. “The only friends that I can see in person are army friends. Even though I can call my family or my high school friends, I can’t really see them or be with them. It’s been tough.”

Upon completion of his basic training, Lim hopes to make it into command school, where he would have a higher rank and more responsibilities. Although it would require participation in more field camps, Lim performed well on a leadership test and is excited to strengthen his leadership abilities.

After his two years of service, Lim plans to attend the University of California, Berkeley, where he has deferred his enrollment. He hopes to come back to California with a fresh outlook on life.

“To be honest, most of the skills that you learn in the army are pretty useless for most people, so I’m just focusing on improving myself and gaining some perspective on the world,” Lim said. “Already, my training has given me a lot more willpower, and I feel like I can push myself a lot more while knowing my limits.”

This story was originally published on The Talon on November 22, 2020.