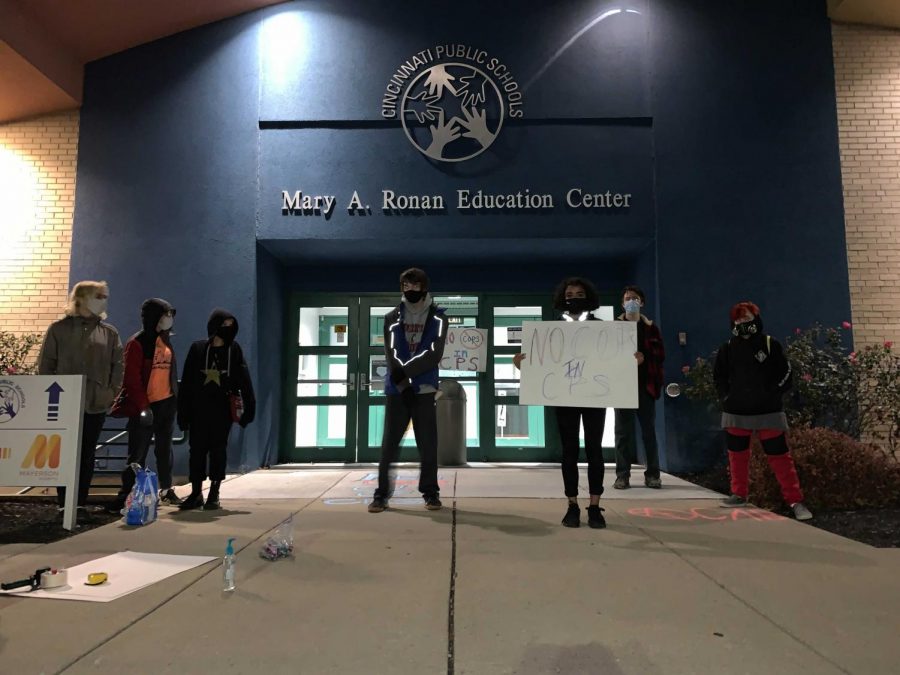 Fighting to remove police from CPS schools, members of Young Activist Coalition protest outside of the Mary A. Ronan Education Center during a school board meeting. They have also spoken with community members and repeatedly informed them of what they can do to continue fighting.

After years of frustrations from the situations around her, frustrations with different issues regarding immigration and microaggressions and fear with police officers, Isabella Gordo, ‘23, wanted to make a difference. Being a socially conscious woman of color, Gordo made the decision to join Young Activist Coalition in January of this year.

The organization started as Young Feminist Coalition around 5 years ago, and later became Young Activists Coaliliton as it’s known today.

Based in Cincinnati, Young Activists Coalition is a student-led movement focusing on solving issues in the community. They take on projects anywhere from police brutality to intersectional fights between genders, class and races with a goal to fight for peace, justice and human rights for all, according to @youngactivistscoalition on Instagram.

After helping start the Student Ambassador Program in YAC created to reach out to students in CPS and the Greater Cincinnati area this summer, Gordo took on her current role as a student ambassador coordinator. Her job is to organize and help the student ambassadors in the group with anything they need.

Owen Derico, ‘23, joined the group around March of this year.  “I was looking at the time for somewhere to put my effort towards leftist causes, and it was something that I knew was a present force in Walnut Hills, and I had seen that they had done good things and so I decided to join,” Derico said.

Now the Vice President of Young Activists Coalition, he helps coordinate events, leads and directs meetings, supports other executive positions and has a role in keeping finances on track. Derico also creates graphics for YAC, contributing to a complete redesign of logos and branding.

Their current focus is a Fix our Schools campaign that started this year, which aims to ensure “[CPS] schools no longer serve as enforcers of the colonist, white supremacist system, but rather serve as a model of what our world can look like,” according to their Instagram.

They are aiming to create “comprehensive reform in CPS” with a wide variety of demands including increased teacher salaries, removal of police officers and metal detectors, trans-inclusive schools and protection for disabled students. They also listed additions to the curriculum such as climate injustice and inclusive sex education.

The changes they are hoping for cannot be fixed overnight. Gordo believes this is a project that will take at least three or four years.

Protesting isn’t the only thing being done to address this issue. Less direct actions like posting conversations is something Gordo finds just as important.

“Our angle, at least for this year is to get a conversation started, to get the ball rolling because a lot of these issues are not just easily fixable. Hopefully, there’s an effort that begins this year to get all these things started.” Gordo said.

Derico believes the removal of police and metal detectors is something that needs to be brought and spoken to with the school board. Other issues may only need to be addressed by school administration. He believes that solving any kind of issue relies on the groups ability to be flexible.

“One of the main things we’re focusing on is the CPS school board’s anti-racism policy, which we consider to be very underdeveloped. It doesn’t even mention the police and we’re basically of the mind that if you’re drafting an anti-racism plan in the summer of 2020, it’s not going to be complete unless you’ve addressed police officer presence within schools,” Derico said.

Being in YAC even just for a few months has had a major impact on both Gordo and Derico’s lives. From political philosophy and an awakening to what’s happening in the world, their experiences in YAC have changed their outlook on the world.

“Activism for a cause you believe in is one of the most important things you can do to develop your philosophy and develop how you think beyond just actually being out there [protesting]. it gives you a new perspective.” Derico said.

The strong sense of family bond created between the members is something Gordo is glad to be a part of, “We’ve been able to create a culture of love and compassion here.”

She’s also proud of the growth of the members in YAC. When young people come in with limited knowledge of political stances, and then gain that knowledge and are actively working to create change, Gordo believes they should be celebrated.

They plan on continuing efforts to get police removed from CPS Schools in the short term. Not only removing police but replacing them with mental health resources, therapists and other ways to provide extra support to students is a priority.

In the long terms Derico hopes to keep pushing on the same issues while also starting new projects that are important to YAC members.

“As young people we’re not just hopeless, [we’re told] that we just can’t do anything, and that we have to watch from the sidelines,” he said, “I think that YAC creates a great, you know, culture for us to grow as activists.”

This story was originally published on The Chatterbox on December 10, 2020.