Kid Cudi’s New Album “Man On The Moon III: The Chosen” Strongly Depicts That You Are Not Alone 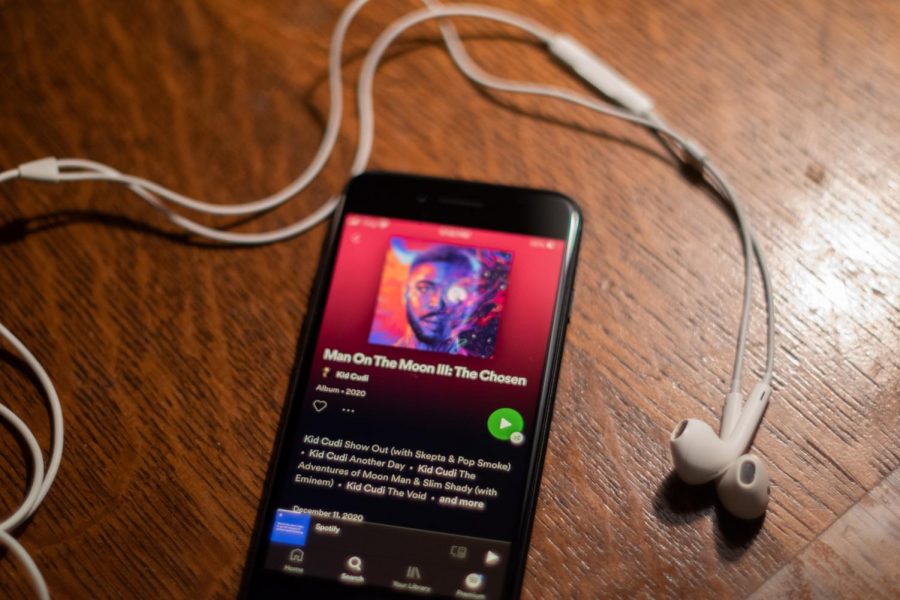 In the past, Scott Mescudi, commonly known by his stage name, Kid Cudi, has had a steady theme throughout most of his albums and songs, speaking out about his struggles and mental health problems. In his new album, “Man On The Moon III: The Chosen,” the theme continues with a deeper and more realistic approach.

Now, ten years later, the final installment of the trilogy has been released on Dec. 11, 2020. “Man On The Moon III: The Chosen” is constructed of 18 songs, adding up to 58 minutes and 24 seconds, featuring four other artists including Skepta, Pop Smoke, Phoebe Bridgers, and Trippie Redd.

When I listened to this album all the way through for the first time, I was slightly disappointed, because I was so accustomed to Cudi’s old music, which typically is more upbeat and catchy while still being candid about his life.

Since then, the album has significantly grown on me.

“Man On The Moon III: The Chosen” is consistent with its heart-hitting and honest lyricism. The upbeat and catchy style of his old music that I originally missed was replaced with a more serious and mellow sound, which I now realize demonstrates Cudi’s growth as a person.

Cudi deeply discusses the trials and tribulations of living with depression and anxiety in this album, as well as his struggles with substance usage. He completely opens up about what’s going on inside his head, describing it through detailed lyrics.

The album begins with a 37-second song called “Beautiful Trip,” packed full of mesmerizing vocals and high tones, ending with a “3, 2, 1” countdown that flawlessly transitions into the first full song of the album, “Tequila Shots.” Cudi discusses the internal struggle he battles with on a daily basis as he tries to cope through self-medicating with alcohol and drugs.

Since Cudi has always been sincere and candid about himself in all of his songs, which I feel that no other rapper or hip-hop artist has been able to capture in the same way, his music tends to resonate with many people who are struggling with their mental health. With his music, Cudi is able to provide reassurance to his listeners that they are not alone in their troubles, especially in this album.

The songs that I feel most strongly convey this message are “Damaged,” where he discusses what life is like “when you’re a damaged man;” “Another Day,” where he expresses his thankfulness for seeing another day, but he is still the same and continually struggling; “Sad People,” which talks about Cudi’s late night thoughts and his continued search for peace within himself; and “The Void,” which expresses that Cudi will do anything to avoid the darkness that lurks within himself.

In the second to last track “4 Da Kidz,” Cudi connects to younger listeners, acknowledging that some people might not be able to fully understand what they’re feeling, but tries to depict that he is there for them through his music. He gives advice stating that this is “all in the plan, as you grow, make the moments last.”

In “Elsie’s Baby Boy,” Cudi reflects on his life as a child and his relationship with his mother. He reminisces on how hardworking his mom was, appreciating all she did, yet also recognizing that there was nothing she or Cudi’s siblings could do to make him feel less sad and alone.

“Lovin’ Me” features Phoebe Bridgers and is set apart from all the other songs because it speaks of the importance of self love, and that you cannot grow without it, which is not addressed in any other song on the album.

“Sept. 16” is a song that expresses the intense and wondrous love that Cudi has experienced. The song’s sweet intentions and soft beat and vocals coincide perfectly with each other.

Overall, Cudi has created a beautiful and honest album. “Man On The Moon III: The Chosen” definitely does its job to fully complete the Man On The Moon trilogy.

I believe that everyone can connect with at least one song on the album, because Cudi is able to speak to many different types of people through his powerful lyrics that leave a comforting undertone in your mind, strongly illustrating that you are not alone.

This story was originally published on The La Salle Falconer on December 16, 2020.