The Capitol Has Fallen

A real-life "Olympus Has Fallen" attack has occurred, but not from highly trained terrorists, but people with Trump flags. 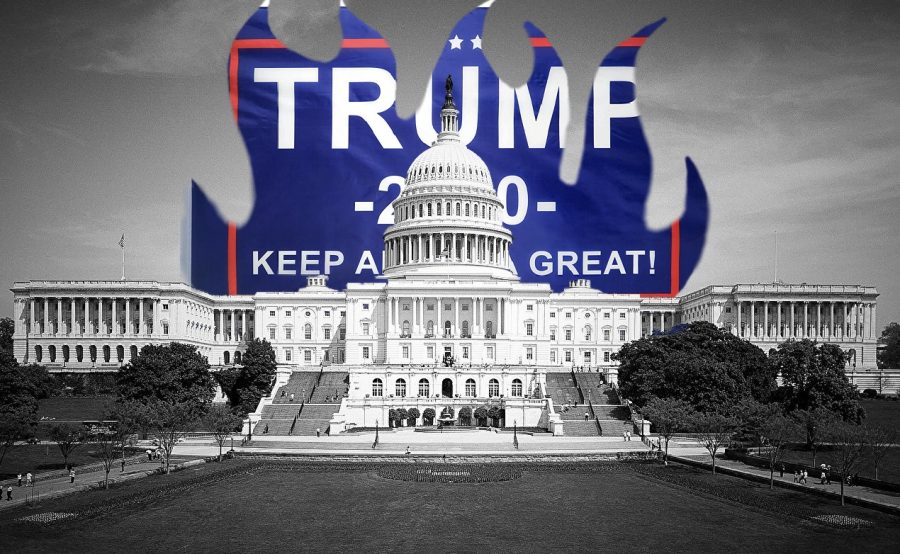 The Capitol building burning in a metaphorical Trump flag flame. Although the building was not burned down during the riot, there is a lot of damage done to the building and the nation's reputation.

I remember the day Biden won. It felt like a weight was taken off my shoulders. I felt relief seeing people dancing on the streets rejoicing, banging pots and pans from their homes, shouting to the world: “Democracy survives.”

But along with the victory came those who pointed out false truths.

I saw many people repost tweets made by Republicans about their so-called “composure.”

“Biden is currently ahead, and yet there is no rioting, looting, or videos of unhinged crying from Trump supporters. This surprises nobody. One political party has a culture of psychotic childish outrage when they don’t get their way. The other goes to court. Civilized.” Buck Sexton, a conservative radio personality, tweeted on Nov. 6.

So childish outrage isn’t refusing to concede and tweeting in all caps, “WE WON THIS ELECTION BY A LOT” even after the courts and members of your own party already agree no fraud took place.

So childish outrage isn’t threatening to veto a defense spending bill because you want Twitter to stop claiming your false tweets as misleading.

So childish outrage isn’t tweeting out about any Republican who doesn’t do what you want in order to blacklist them within your party.

So childish outrage isn’t calling the Georgia Secretary of State telling him to “find 11,780 votes” and trying to intimidate him to do your will.

So childish outrage isn’t breaking the windows of the Capitol Building and attacking your own government building because you feel hurt that your candidate didn’t win.

This sounds pretty civilized to me.

But, what about the Black Lives Matter protest? Those two things cannot be equated. And if you believe you can compare fighting for human rights and fighting for a president who is in denial he has lost the presidency, you have real privilege.

These people were fighting for basic human rights.

Something a white person never has to worry about because their country wasn’t biased against them, but the worst part is the treatment of Black Lives Matter protesters in comparison to the treatment of Trump supporters. How is it extreme measures were taken against Black Lives Matter protests, even though 93 percent were peaceful, but when a group of domestic terrorists storms a building where the government functions, the same treatment isn’t warranted? And when Trump supporters are finally being pushed back, they complain about how they back the blue. Thinking “How could the police do that?” when they’ve been supporting them with a flag that has a blue stripe. It hurts being on the other side of the attack, doesn’t it? Yet, you didn’t even experience the worst of it, because while human rights protesters got tear gas, white people wearing MAGA hats got a free pass.

Donald Trump Junior tweeted out “70 million pissed off republicans and not one city burned to the ground.” after Joe Biden was announced as the president-elect.

But let’s revise that tweet in the wake of the events of Jan 6.

“70 million pissed off republicans led to a group of rioters storming the Capitol building, a place of national importance. They broke into Nancy Pelosi’s office and put their feet on her desk and wrote ‘We will be back’ on a piece of paper left on the desk. They made a bomb threat leading to officials sweeping each room for safety and then later discovering an IED, to which they safely detonated thankfully. Then engaged in a gunfight between Capitol police and domestic terrorists, which were people from our own country. Homegrown terrorists. Our own citizens attempted to overthrow the government. In the midst of this, a woman died in the crossfire, and in total five lives were lost yet, during all this, rioters took selfies with police like they were long time friends instead of being treated unfairly like those who fought for their rights in May 2020. But, the president didn’t call the National Guard, his Vice President Mike Pence did, to get the situation barely under control in order to finish the verification of the new president, Joe Biden.”

And what does the soon-to-be ex-president have to say?

“We love you, you’re very special.”

This has replaced my favorite Trump quote, “Proud boys stand down and stand by”. After the video of Trump speaking to the rioters was released on Twitter, the social media company soon took it down because his tweet severely violated their Civic Integrity Policy. They then placed a 12-hour ban on his account and will keep it locked until he removes the tweets.  On top of that, he is also banned on Facebook. Why? Because our president said “I love you” to rioters and said nothing to deescalate the situation besides half-hearted tweets about being “peaceful” after they invaded the Capitol. Because this is how our “president” responds to an attack on a government building and social media has had enough of this because it’s time to stop. It’s time to concede. The whole world is watching and this is embarrassing. Our own citizens are being called domestic terrorists because of their actions yesterday. We are fighting one another and it’s time to move on.

We as Americans can not be called the “prevailer of democracy” when the country’s response to an election loss is to attempt a coup by trying to prevent the certification of the new president. This is anarchy, and if die-hard Trump supporters continue down this false high road, the nation will soon be in shambles. But the worst part is five people died and many more are injured or hospitalized as a result of this riot. America is already being looked down upon: instead of believing and being the “Land of the Free,” a part of our country is turning it into the Land of whatever Trump wants it to be.

This story was originally published on FHC Today on January 7, 2021.