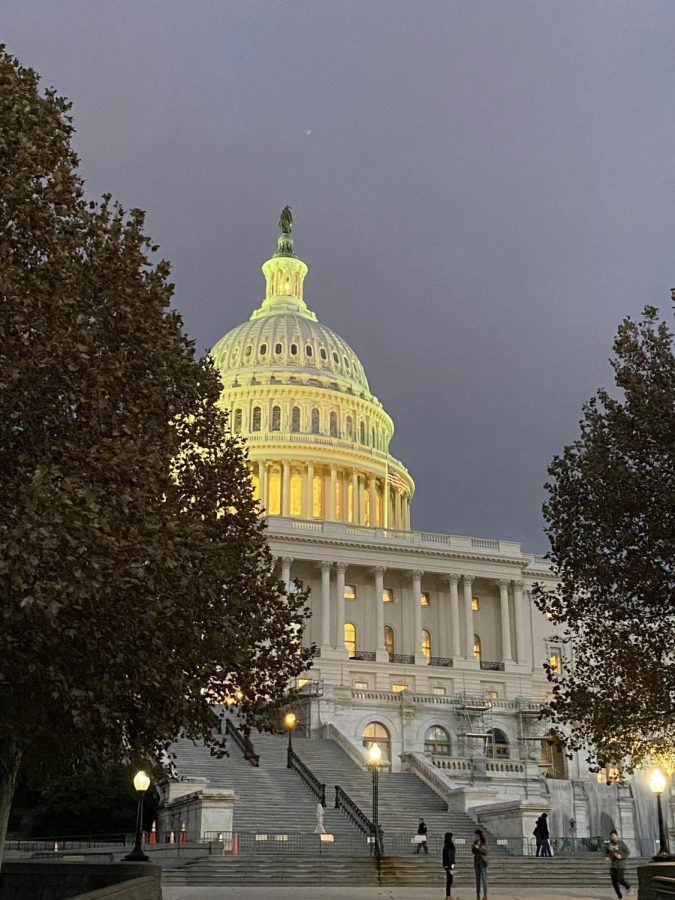 The Capitol stands peaceful captured in a traditional day in Washington D.C. However, on Wednesday, Jan. 6, the Capitol was breached by extremists, marking the sole Capitol invasion since the attack of British troops in 1814.

Tensions climaxed as extremist supporters of President Donald Trump rallied at the nation’s Capitol in Washington D.C. on Wednesday, Jan. 6. The chaos interrupted the U.S. Congress who were gathered to complete their constitutional duties by confirming Joe Biden as the next President.

After a Save America rally held by President Trump, thousands marched towards Capitol Hill, holding flags with various imagery associated with the President in order to contest the recent election results. As they pushed past Capitol police and into the building, Congress was forced into lockdown.

“I was worried about what they [the people in the Capitol] were going to do next,” sophomore Marissa Morales said. “Then I saw that they were on the Senate floor.”

The mob vandalized capitol infrastructure, repeated pro-Trump chants, and stole government property. As of now, there have been five confirmed deaths and dozens of arrests.

“I could not believe my eyes because I had never seen something like that before,” senior Bryce Pence said. “As it kept going on I became enraged and upset because that scene was a disgrace…to America, its people, and democracy as a whole.”

As he witnessed the Capitol events unfold, freshman William Gum believed the chaos and tension was the result of consistent inciting rhetoric from the President.

“The cause of these events was Trump’s manipulation and baseless claims about the results of the election,” Gum said. “He has somehow convinced his supporters that most news and media is fake, but you can trust what he says.”

A few hours after the chaos started, President Trump released a video statement on his now-permanently suspended Twitter to the American public which prompted senior Lily Albini and many others to juxtapose the unfolding events to the Black Lives Matter (BLM) protests which occured in the summer.

“I watched as Trump addressed them [in the video] with an ‘I love you’ and told them they are special,” Albini said. “It made me feel incredibly frustrated and sad, especially in comparison to how the protestors for BLM were treated throughout the summer.”
In order to protect the Capitol, the Capitol Police Force consists of 2,000 personnel. Although the force was present on Jan. 6, without the reinforcement of previously declined National Guard assistance, the Capitol was breached, causing the Capitol Police Chief Steven Sund to resign following the riot. The Sergeant of Arms for both the House and the Senate, who are tasked with maintaining order in their respective meeting rooms, also resigned following the attack.

“Violent rioting like that compared to peaceful protests like the BLM Movement and the difference of how Trump handles them is appalling,” McDonald said. “Our own president is biased, racist, and a liar. He is selfish and has allowed violence and terror for his own benefit.”

Following the events of Jan. 6, three Democractice House Representatives, along with over 130 co-signers, plan to introduce articles of impeachment against President Trump. According to CBS News, the articles accuse President Trump of “willfully inciting violence against the Government of the United States.”

“To be frank, I am pretty angry with the reaction of the media. These are the same people who were silent as our cities burned to the ground in ‘fiery but mostly peaceful protests’,” sophomore Rohan Dharwadaker said. “Portland, Minneapolis and even D.C were quite literally on fire five months ago. Yet no one said anything. We did not have a discussion in class, we did not change lesson plans to ‘process it’. Nothing. It seems somewhat hypocritical to call out yesterday’s protests but not the rioters who burned our cities.”

Despite the mixed reactions, social studies teacher Dalton Pool understands it as a quintessential example of how American youths are receiving current events.

“This younger generation of Americans is so much more prepared intellectually to lead than any generation before them,” Pool said. “My students have been thoughtful and empathic in their responses, while also pointing out and condemning the hypocrisy and injustice that was on display that day. The kids are alright.”

For McDonald, this occurrence has provoked a discussion of the situation’s impact on the country, America’s politics, and its people.

“[This] will be an event that will forever be in the history books because it was so prejudiced and hateful,” McDonald said. “Violence and terrorism are unacceptable.”

Regardless of his condemnation of the event, Pool hopes that this is a lesson of reflection for the American people.

“I hope January 6 serves as a wake-up call for America,” Pool said. “We are best as a country when we are selfless and compassionate. These are the American ideals that have made us great and that will lead us to greatness in the future.”

This story was originally published on The Dispatch on January 8, 2021.