A national tragedy: Students and teachers reflect on recent riots 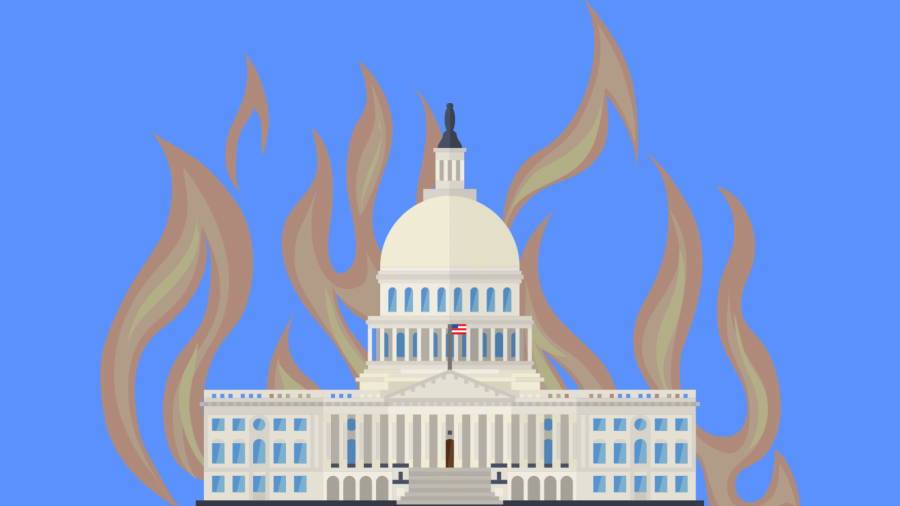 Zooms were turned off and cable news was turned on. Long days turned into longer nights as millions of Americans tuned into news broadcasts of the Jan. 6 riots at Capitol Hill. As a mob of right-wing extremists attacked the Capitol and made history, teachers dealt with the question: What comes next?

“It didn’t hit me as [far as talking to students] until the nighttime when I was going to bed. I was like ‘oh geez, I’m going to have to talk about this stuff tomorrow.’ We had a meeting with teachers and I was asked to discuss what are some things you can do if you wanted to discuss [the riots] with your class,” Chazen said. “I gave the teachers some advice and said what I was going to do. I just let the students guide and decide whether they wanted to talk about it. My recommendation to teachers was to do what you feel most comfortable with.”

Allowing students to lead the discussion, Chazen saw varying levels of interest throughout the day.

“We spent about half the class talking about this. I had one of my classes ask a few questions, but not too many. My other class spent a bit more time. I let the students guide me because you don’t know how students will react, if they have a personal reaction, if they may have family or other loved ones involved. I let them guide me as far as what I should be doing,” Chazen said.

After gauging students’ opinions, Chazen called on his past experiences to create a learning opportunity. Chazen interned with the Senate in 1991 and used his knowledge of the buildings and Washington’s layout to contextualize the Capitol Hill riots.

“Using Google Earth, I kind of laid out where everything was located and did a chronological review of the day. I think [students] liked that because they could get an understanding of where everything was and what was happening,” Chazen said. “What they saw on TV, they could now see exactly where that was happening. That sparked a lot of good questions and comments by classes. I tried to teach it through the lens of government and relate it to things we discussed in class.”

This is not the first time a national tragedy has made its way into the classroom. Events like the Sept. 11 attacks, Boston Marathon bombing and Sandy Hook Elementary School shooting have shaped teacher responses to trauma as well.

“I told the kids that because I’ve been doing what I do for so long, my comfortability in talking about these things is a little bit more because I’ve done it more. I taught through Columbine, Sandy Hook, 9/11 [and] there was a lot of comparison, especially with 9/11,” Chazen said.

In his second year of teaching at West, physics teacher Joe Milliano has not taught through the aforementioned events. Milliano let students drive these discussions and encouraged group-processing.

“I was talking to a friend the other day about these day-after conversations. I’ve had moments where I’ve felt that the content I was teaching was unimportant given other contexts and we needed to have a conversation,” Milliano said. “I knew that something needed to be said. I just came in, gave some open-ended discussion questions and tried to let the students take the wheel from there. I also [at] one point mentioned that I wasn’t teaching. If anything, I was processing with them.”

Having these conversations via Zoom led to difficulties in communication, while also providing an anonymous way for students to share their feelings.

“I asked people to unmute themselves and talk, and that was just less successful given the nature of Zoom,” Milliano said. “I think having the ability for students to communicate in the chat, to share their thoughts, to bounce off of each other that way [and] the ability to message anonymously did help the discussion. Students that maybe otherwise wouldn’t have felt they could be honest were able to be honest through that medium.”

A learning experience for all, the avenues teachers provided gave students a chance to process, ask questions and understand the implications of the riots. Junior Santi Lugo discussed the Capitol Hill riots in all of his classes.

“I could tell the morale was low, people were affected by the events and teachers were mindful of that,” Lugo said. “The willingness of teachers to answer our questions and explain what happened made the situation more bearable. I think it highlighted that it was a shared experience. While there has been a lot of division in our country, the fact that we all experienced the attack together allowed for us to feel more united and supported than we have felt in the past. I’m grateful that teachers took the time to help us process such a difficult moment.”

However, not all students thought these discussions were necessary. Senior Katherine Rein discussed the Capitol events in all classes and felt school was not the proper place for this.

“[Teachers] definitely did cover it more than I expected them to. I think people are making this a bigger deal than it is. The media is making people a lot more afraid. I remember being in Latin the day it happened and [my teacher] let us go early to see what was going on,” Rein said. “I was expecting something a lot bigger. It didn’t meet expectations. People made it such a big deal and I was expecting something so much bigger because of how polarized the election has been. It was overhyped [and] as the day went on, I was burned out.”

Despite varying opinions on the Capitol Hill riots, both students and teachers experienced history. Millano believes this moment of history and surrounding discussions represent hope for a brighter future.

“We have students [who are] very engaged and very compassionate toward trying to make the U.S. better than it currently is,” Milliano said. “And so, in a dark moment, there was that glimmer of hope and inspiration.”

This story was originally published on Pathfinder on January 9, 2021.