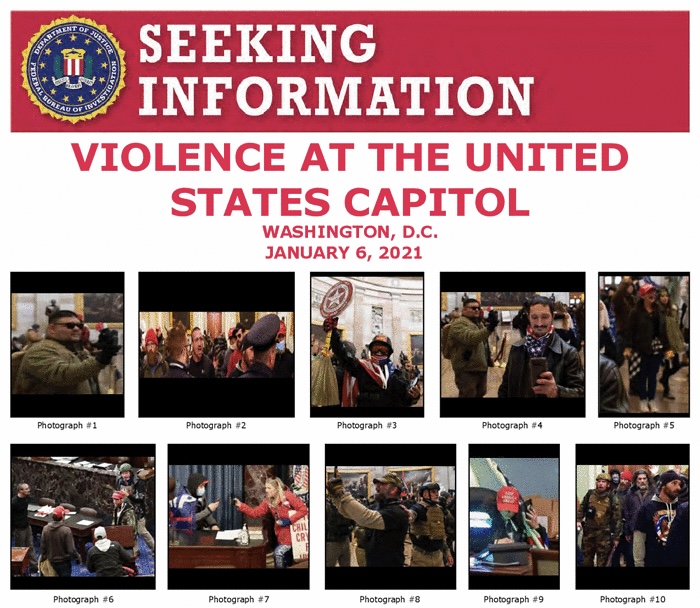 The FBI is requesting information regarding individuals sparking violence at the Capitol storm via released photographs. Tips can me made on the FBI website. https://www.fbi.gov/wanted/capitol-violence

Radical supporters of President Donald Trump raided the Capitol building Jan. 6, wreaking havoc by breaking through windows and sitting at government officials desks to protest the counting of electoral votes.

This was not the Republican party; this was a slap in the face of democracy.

This unprecedented rioting was the first time the Confederate flag has ever been flown in the Capitol. A flag that represents Union opposition flown at the headquarters of American lawmakers is disgusting; actions like this undermine the entire basis of our country and ridicule the democratic process.

This event was not societal unrest; it was domestic terrorism, and it cannot and will not go unpunished. The Proud Boys, a White supremacy group, was also reportedly spotted at the event. A group that goes against the equality of the Land of the Free taking over the Capitol should not sit well with anyone.

When Congress resumed Wednesday evening, government officials returned to seats with bullet holes in them. Vice President Mike Pence was escorted out of the Capitol by the Secret Service in response to the possible harm that could have come to him from rioters that identify with his own political party. Several pipe bombs were also found on Capitol grounds with the alleged target being Republican senators that would certify the electoral votes for President-Elect Joe Biden.

A “peaceful protest” does not entail gunshots and bombs. These riots are the first executed attack on the U.S. Capitol since the War of 1812 when an angry British mob burned the Capitol to the ground. This could be considered an act of war by Americans on their own soil. If America is as great as Trump supporters make it out to be, then it makes no logical sense for them to attack their own government. This was a coup—not a protest.

If this was a Black Lives Matter protest, the situation would have been met with military force from the beginning. There were no unmarked vans with government agents in civilian clothing sending rioters to federal holding cells. This was a planned event, and President Trump did nothing but encourage it for months.

Mail-in voting is not new, and voter fraud in this election has been disproven time and time again, yet Trump’s loyal fanbase continues to believe his lies. These riots would have never occurred if Trump, in November, accepted that for the first time in his life, money could not buy him something he wants.

BLM protesters can be seen on video being beaten by police over the summer, but somehow Trump supporters can gain control of the Capitol for 12 hours. Wednesday’s events were not met by equal force from law enforcement, and that’s sickening.

Though some influential Trump supporters, such as Kaitlin Bennet, have attempted to lessen the severity of what can only be described as treason by comparing Wednesday to protests that took place over the summer in response to the death of George Floyd, GOP lawmakers, such as Chip Roy, have explicitly condemned the actions of rioters loyal to Trump.

Storming the Capitol is not an act of protest but an act of government defiance, and all rioters should be arrested and prosecuted for their crimes. The actions of Jan. 6 diminished democracy, and will be remembered as a sad day of domestic terrorism in American history.

This story was originally published on Valley Ventana on January 8, 2021.