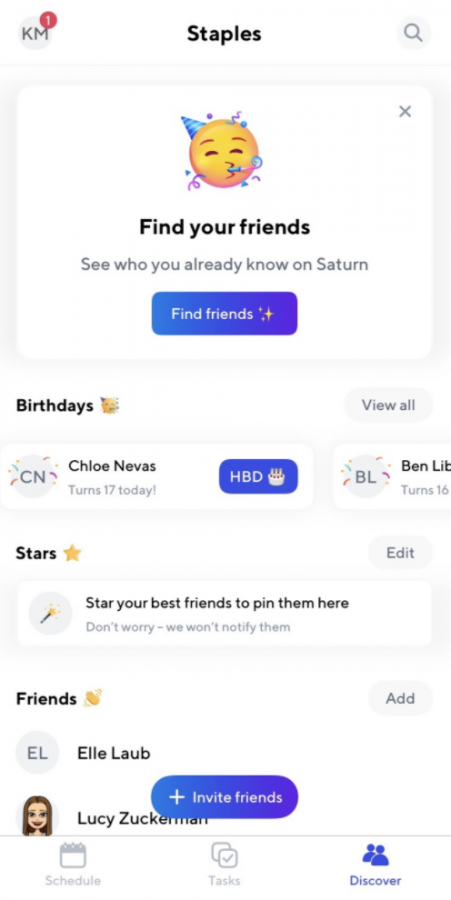 Dylan Diamond ’17 was placed on Forbes’ 30 Under 30 List in the “Youngest” category for his development of the school navigation app “Saturn.” The app aims to make school and schedule navigation more manageable as well as connect students by providing an option to friend other students on the app itself, on Snapchat or on Instagram.

Staples is the alma mater to many impressive and accomplished individuals. From its impressive acting and musical programs, academically rigorous classes and intense sports teams, Staples has fostered a basis for success in many of its graduates. Adding to Staples’ long list of commendable graduates is Dylan Diamond ’17, whose work as a computer scientist recently landed him on the Forbes 30 Under 30 list in the “Youngest” category.

At just 22 years old, Diamond has double majored at the University of Pennsylvania, been the youngest employee and intern at Tesla and developed several apps, specifically in the realm of school accessibility and navigation. Saturn, the school navigation app that Staples utilizes, has consumed Diamond’s career and is the particular accomplishment recognized by Forbes.

“We’ve expanded to hundreds of schools. We’ve built up a team in New York and we’ve been fortunate to get a lot of people excited about the company and invest in [it],” Diamond said. “We’re working with Snapchat as we take Saturn from what started as a calendering project with a little social behavior into a very social project that connects people with their community.”

Diamond gives gratitude to Staples for its excellent computer science program and its accepting environment to enhance his career potential.

“Staples was such a good school and it helped in a lot of ways because it was a competitive culture in that everyone was super smart,” Diamond said. “Everyone was always accepting and embracing new ideas. It was just a great place to innovate and make a difference in the community and I’m very thankful for the time and teachers and people there.”

While Staples was certainly influential in Diamond’s path to success, he primarily attributes his personal passions to his achievements. Tinkering with computers on his own time were the main reasons for his growth as a computer scientist. He programmed his first website in fourth grade and developed several apps throughout the rest of his grade school career, without the assistance of a teacher or classroom to learn from.

“I always did a bunch of projects and things on my own,” Diamond said. “When I was in fourth grade I started a web design company and scaled that up throughout middle school and was just doing a bunch of sites for friends and family [and] learning web development, all self-taught.”

Diamond’s first experience with app development occurred in his freshman year at Staples with the creation of MyHAC, an app that allowed people to check their grades and GPA from their phone.

“It was used by everyone at Staples, I think maybe some middle schoolers, parents used it. It was pretty prolific within the district,” Diamond said. “I scaled that up to thousands of high schools across the country with over half a million people on that app. It was number one in the paid education app store for a while.”

Diamond continued to work on school navigation apps throughout the rest of his high school career, transforming MyHAC into StaplesGotClass, which eventually transformed into iStaples, the app that Staples students used up until this year with a switch to Saturn.

During his senior year, Diamond landed an internship with Tesla after developing an app which let Tesla owners control their vehicle from their phone. The app went viral on a Tesla forum and the company reached out to Diamond to offer him an internship which later progressed into a job, making him the youngest employee at the company.

“I started working [at Tesla] during my senior year of high school. I moved to California and was working at Tesla and ended up working there for the next few years,” Diamond said. “That was an amazing experience. That taught me a lot more than any computer science course than high school or college.”

Making the Forbes 30 Under 30 List is certainly one of Diamond’s proudest accomplishments of his career, but he gives a lot of credit for this feat to his supportive team.

“I’m honored to be on the list, but it’s really a byproduct of building a product that you’re really passionate about,” Diamond said. “It’s a team effort from Saturn, not just the individual. So I’m super thankful for the team.”

In order to ensure the smooth and successful functioning of Saturn, the company appoints several ambassadors in each school to update the team on scheduling changes or technical glitches within the app.

“We’re in a group chat with three people that work for Saturn,” Lauren Speeris ’21, one of Staples’ Saturn ambassadors, said. “We basically just give them suggestions of how the Staples schedule works. If there’s any updates to our schedule like holidays or events, we report back to them so they can fix [the app].”

Diamond hopes to continue his computer science career and expand Saturn globally. Being such a young entrepreneur, Diamond has a long career path ahead of him which he is excited to explore.

Diamond’s experiences throughout high school, college, Tesla employment and creating his own business have all melded together into a passion that he hopes will prosper in the long term.

“Saturn has been by far the highlight [of my career] because I’ve been able to work with very talented people who care a lot about this mission,” Diamond said. “There’s a long way ahead of us, but we’re making good progress and the sky’s the limit with Saturn.”

This story was originally published on Inklings on December 23, 2020.